Avranches is a commune in the Manche department in the Lower Normandy region in northwestern France. It is a subprefecture of the department. The inhabitants are called Avranchinais.[1]

By the end of the Roman period, the settlement of Ingena, capital of the Abrincatui tribe, had taken the name of the tribe itself. This was the origin of the name Avranches. In 511 the town became the seat of a bishopric (suppressed in 1790) and subsequently of a major Romanesque cathedral dedicated to Saint Andrew which was dismantled during the French revolutionary period. As the region of Brittany emerged from the Roman region of Armorica, Avranchin was briefly held by Alan I, King of Brittany as part of the Kingdom of Brittany at the turn of the 10th century. The regions that later became the Duchies of Normandy and Brittany each experienced devastating Viking raids, with Brittany occupied by Vikings from 907 to 937. In 933 Avranches and its territory, the Avranchin, were ceded to the Normans.

Hugh d'Avranches, 1st Earl of Chester, a magnate under William the Conqueror, was the son of Richard le Goz, Vicomte d'Avranches.[2]

In 1172 (September 27–28) a council was held at Avranches in response to the murder of Anglo-Norman Saint Thomas Becket. Henry II, King of England, after due penance done at Avranches on 21 May 1172, was absolved from the censures incurred by the assassination of the holy prelate and reached the Compromise of Avranches with the Church, swearing fidelity to Pope Alexander III in the person of the papal legate. 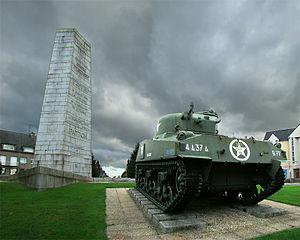 The same council was forbidden to confer on children benefice, carrying with it the cure of souls, or on the children of priests for the churches of their fathers. Each parish was required to have an assistant (vicarius), and the Advent fast was commended to all who could observe it, especially to ecclesiastics.

The town was damaged in both the Hundred Years' War and the Wars of Religion.

Álvaro Vaz de Almada was made 1st Count of Avranches by King Henry VI of England on August 8, 1444.

A literal description of the town in the 19th century is recorded in Guy de Maupassant's novel Notre Cœur, when the main character Mariolle meets his lover and sets up for Mont Saint-Michel:
The houses crowning the heights gave to the place from a distance the appearance of a fortification. Seen close at hand, it was an ancient and pretty Norman city, with small dwellings of regular and almost similar appearance built closely adjoining one another, giving an aspect of ancient pride and modern comfort, a feudal yet peasant-like air.[3]

The liberation of Avranches during World War II was led by General George S. Patton and began on 31 July 1944.

Avranches is situated at the southern end of the Cotentin Peninsula on the E40 road connecting Saint-Lô with Brittany and on the rail line between Lison (linking to Caen) and Dol (linking to Rennes).

The town was founded on high ground overlooking the dunes and coastal marshes along the bay forming the corner between the peninsulas of the Cotentin and Brittany. From Avranches, it is possible to see the Mont Saint-Michel, which was founded by Saint Aubert, Bishop of Avranches in the 8th century.

A museum houses the collection of manuscripts of Mont Saint-Michel, deposited in the municipal archives during the French Revolution. It is one of the largest collections of medieval illuminated manuscripts in France, outside national and university libraries.

Formerly dominated by the cathedral, where Henry II did penance, an open grassed area La Plate-Forme overlooking the bay towards Mont Saint-Michel displays only a few remnants of the destroyed building.

The major church Notre Dame des Champs was constructed in Gothic Revival style in the 19th century to restore the religious life of the town after the destruction of the cathedral. A smaller church Saint Gervais houses a treasury, best known for the purported skull of Saint Aubert complete with hole where the archangel Michael's finger pierced it (probably a prehistoric trepanned skull).

The botanical gardens were founded in the grounds of the former Franciscan convent in the late 18th century. The expansion and introduction of exotic species in the 19th century and the location of the gardens overlooking the bay made the gardens an important sight in the town.

The Manoir de Brion, an ancient Benedictine priory of Mont Saint-Michel, is located in Dragey.

Avranches was the birthplace of: