From Infogalactic: the planetary knowledge core
Jump to: navigation, search
For other uses, see Ayatollah (disambiguation).

Ayatollah (UK /aɪəˈtɒlə/ or US /aɪəˈtoʊlə/; Persian: آيت‌الله‎‎ ayatollah from Arabic: آية الله‎‎, āyatu allah "Sign of Allah") is a high-ranking title given to Usuli Twelver Shī‘ah clerics. Those who carry the title are experts in Islamic studies such as jurisprudence, quran reading, and philosophy and usually teach in Islamic seminaries. The next lower clerical rank is Hojatoleslam wal-muslemin.

The name "ayatollah" originates from a passage in the Quran which the Shi'a, unlike the Sunni, interpret to mean human beings can be regarded as 'signs' or 'evidence' of God. Passage 51:20–21 of the Quran states:

On the earth are signs (Ayat) for those of assured Faith,

As also in your own selves: Will ye not then see? 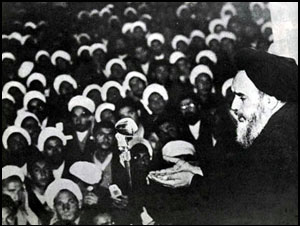 The title is currently granted to top Shia mujtahid, after completing sat'h and kharij studies in the hawza. By then the mujtahid would be able to issue his own edicts from the sources of Islamic religious laws: the Qur'an, the Sunnah, ijmāʻ, and 'aql ("intellect", rather than the Sunnī principle of qiyas). Most of the time this is attested by an issued certificate from his teachers. The ayatollah can then teach in hawzas (shia seminaries) according to his speciality, can act as a reference for their religious questions, and act as a judge.

There are a few women who are equal in ranking to the ayatollahs, and are known as Lady Mujtahideh. The most outstanding in recent history was Nosrat Amin, also known as Banu Isfahani.[1] Current examples of the Lady Mujtahidehs are Zohreh Sefati and Lady Ayatollah Aatieh Hassani also known as Imam'ah Al-Hassani daughter of Grand Ayatollah Gholamreza Hassani.

Historically, there have been several Mujtahidehs in Shi'ism, most famously the women in the family of Allama Hilli, as well as the Baraghani family of 19th century Qazvin.

Only a few of the most important ayatollahs are accorded the rank of Grand Ayatollah (Ayatollah Uzma, "Great Sign of God"). This usually happens when the followers of one of the ayatollahs refer to him in many situations and ask him to publish his Juristic book in which he answers the vast majority of daily Muslim affairs. The book is called Resalah, which is usually a reinvention of the book Al-Urwatu l-Wuthqah, according to their knowledge of the most authentic Islamic sources and their application to current life.

There are 64 living Maraji worldwide as of 2014, mainly based in Najaf and Qom. The most prominent of these include Ali al-Sistani, Muhammad al-Fayadh, Muhammad Saeed al-Hakim, and Bashir al-Najafi in Najaf; and Hossein Vahid Khorasani, Mousa Shubairi Zanjani, Sayyid Sadeq Rohani, Lotfollah Safi Golpaygani, Abdul-Karim Mousavi Ardebili, Naser Makarem Shirazi and Yousef Saanei in Qom.