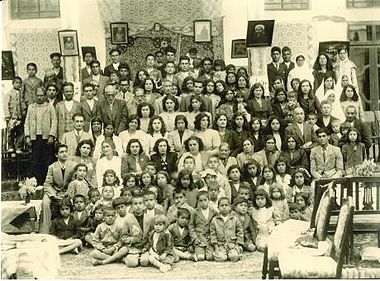 An Azali[1][2][3][4] or Azali Bábí[5][6] is a follower of the monotheistic religion of Subh-i-Azal and the Báb. Early followers of the Báb were known as Bábís, however in the 1860s a split occurred after which the vast majority of Bábís followed Mirza Husayn `Ali, known as Bahá'u'lláh, and became known as Bahá'ís, while the minority who followed Subh-i-Azal came to be called Azalis.[7]

Current estimates are that there are no more than a few thousand.[2][5][6]

Azalis do not accept any who advanced claims to be the Báb's promised one ("Him whom God shall make manifest"). The most bitterly contested claim is that of Bahá'u'lláh in 1863. Azalis rejected the divine claims of Bahá'u'lláh, arguing that the world must first accept the laws of the Báb before "He Whom God Shall Make Manifest" can appear.[8]

With respect to the direction that Azali Bábism took immediately after the split, MacEoin notes:

Azali Babism represents the conservative core of the original Babi movement, opposed to innovation and preaching a religion for a non-clerical gnostic elite rather than the masses. It also retains the original Babi antagonism to the Qajar state and a commitment to political activism, in distinction to the quietist stance of Baháism [sic]. Paradoxically, Azali conservatism in religious matters seems to have provided a matrix within which radical social and political ideas could be propounded.

After the split with the Bahá'ís, some Azalis were very active in secular reform movements and the Iranian Constitutional Revolution (1905-1907), including Shaykh Ahmad Ruhi Kermani and Mirza Abd-al-Hosayn Kermani. However, the community was still suppressed as a heresy and the accusation of being an Azali was often enough for most to believe it to be true. Coupled with the Azali practice of taqiyya (dissimulation) determining whether or not a particular figure in Persian politics was an Azali is difficult.[6]

Taqiya ("dissimulation") was practiced by some Bábís. It was justified by some as a response to the often violent oppression the community faced. However, prominent Bábí leaders never encouraged individuals to practice it; and some who had practiced taqiyya later abandoned it, declared themselves openly, and were put to death.[9]

Among Azalis, however, the practice became ingrained and widespread. One historian has noted:

The Azali Babis and in particular Mirza Aqa Khan Kirmani and Shaykh Ahmad Ruhi showed little hesitation in alteration and falsification of Babi teachings and history in their works. Azali Babis regarded taqiyyah as an imperative requirement. In contrast the Azali Babis glorified taqiyyah in their literature. Taqiyyah was considered a virtue and classified into various levels of concealment. Prominent Azali leaders openly recanted their faith and even abused [the] Bab and Azal in the process.

There was some dispute on the question over who was Subh-i-Azal's appointed successor.[10] MacEoin states that Subh-i-Azal appointed Yahya Dawlatábádí as his successor in turn after the death of his (Yahya's) father, Mirza Hadi Dawlatábádí.[6] However, this was disputed by Subh-i-Azal's grandson, Jalal Azal, indicating that this question was not entirely resolved.[11]

MacEoin notes that, in any event, neither he (Yahya Dawlatábádí) nor anyone else arose to organize the affairs of the community, or produce significant writing to develop the religion. He goes on to say (writing in 1999):

With the deaths of those Azalis who were active in the Constitutional period, Azali Babism entered a phase of stagnation from which it has never recovered. There is now no acknowledged leader nor, to the knowledge of the present writer, any central organization. Members tend to be secretive about their affiliation, converts are rare, and association appears to run along family lines. It is difficult to estimate current numbers, but these are unlikely to exceed one or two thousand, almost all of whom reside in Iran.