Baku State University (BSU, Azerbaijani: Bakı Dövlət Universiteti) is a public university located in Baku, Azerbaijan. Established in 1919 by the Parliament of Azerbaijan Democratic Republic, the University started with faculties of history and philology; physics and mathematics; law and medicine with an initial enrollment of 1094.[1] The first rector of BSU was V.I.Razumovsky, a former professor of surgery at Kazan University.

By its 40th anniversary in 1959, the University already had 13 faculties. The Azerbaijan Medical University and Azerbaijan State Economic University were both spun-offs of the original respective faculties at BSU.

Among the graduates of BSU were two former presidents of Azerbaijan, Abulfaz Elchibey and Heydar Aliyev. The former graduated from the Faculty of Arabic Language and Literature, while the latter, who dominated Azerbaijan's political life for over 30 years, from the Faculty of History. Nobel Prize-winning physicist Lev Landau studied at BSU between 1922 and 1924. 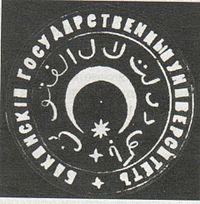 Coat of arms of Baku State University in 1919.

BSU was established on September 1, 1919 by the decision of the Parliament of Azerbaijan Democratic Republic. In its first year, the university had two faculties — Faculty of Philology and the Medical Faculty — and an enrollment of 1094 students.

Among the leading professors in 1920-40 were Azerbaijani writer Abdurrahim bek Haqverdiyev, Orientalist Professor P.K. Juze, Professor A.O. Makovelski, Professor A.O. Mishel and other scholars. During that period the administration of the university invited to Baku such teachers as N.Y. Marr, V.V. Bartold, the academician of the Eastern Science Academy Fuad bek Kuprulluzade.

The years after 1969 can be considered as the years of development in the direction of knowledge and science. Covering a wide historical period, in those years there were founded faculties on modern specialties, departments and about 30 scientific research laboratories started. As a result, there was created a strong assurance of future development. 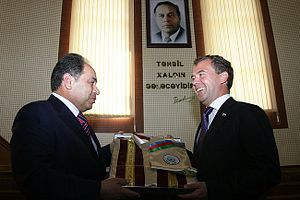 The university is a member of the Caucasus University Association.[4]