Azerbaijani (/ˌæzərbaɪˈdʒɑːni/, /ˌɑː-/, /-ˈʒɑːni/)[4][5] or Azeri (/æˈzɛəri/, /ɑːˈ-/ /əˈ-/), also referred to as Azerbaijani Turkish or Azeri Turkish ([ɑzærbɑjdʒɑn dili]), is a Turkic language spoken primarily by the Azerbaijani people, who are concentrated mainly in the South Caucasus geographical region. The language has official status in Azerbaijan and Dagestan (a federal subject of Russia), although in Iranian Azerbaijan, where the plurality of speakers live, it has no such status. The language is also spoken to lesser varying degrees in Georgia, Iraq, and Turkey.

Azerbaijani is a member of the Oghuz branch of the Turkic languages. It has two primary divisions, North Azerbaijani and South Azerbaijani, and is closely related to Turkish, Qashqai, Turkmen and Crimean Tatar, sharing mutual intelligibility with each of those languages to some extent.[6]

Azerbaijani people in Azerbaijan and Iranian Azerbaijan (and the rest of Iran) refer to their language as Türki which literally means Turkish. In 1992–1993, when Azerbaijan Popular Front Party was in power in Azerbaijan, the official language of Azerbaijan was renamed by the parliament as Türk dili ("Turkish"). However, since 1994 the Soviet-era name of the language, Azərbaycan dili ("Azerbaijani"), has been re-established and reflected in the Constitution because of political reasons. Varlıq, the most important literary Azerbaijani magazine published in Iran, uses the term Türki ("Turkish" in English or "Torki" in Persian) to refer to the Azerbaijani language. Azeris in Iran often refer to the language as Türki, distinguishing it from İstanbul Türki ("Istanbul Turkish"), the official language of Turkey. Some people also consider Azerbaijani to be a dialect of a greater Turkish language and call it Azərbaycan Türkcəsi ("Azerbaijani Turkish or Turkish of Azerbaijan"), and scholars such as Vladimir Minorsky used this definition in their works. ISO encodes its two varieties, North Azerbaijani and South Azerbaijani, as distinct languages. According to the Linguasphere Observatory, all Oghuz languages form part of a single "outer language" of which North and South Azerbaijani are "inner languages".

Today′s Azerbaijani languages evolved from the Eastern Oghuz branch of Western (Oghuz) Turkic[7] which spread to the Caucasus, in Eastern Europe,[8][9] and northern Iran, in Western Asia, during the medieval Turkic migrations, and has been heavily influenced by Persian.[10] Arabic also influenced the language, but Arabic words were mainly transmitted through the intermediary of literary Persian.[11] 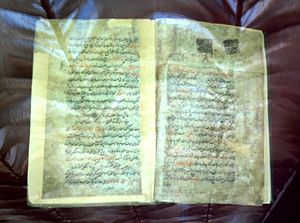 Garden of Pleasures by Fuzûlî in Azerbaijani. Early 19th century. There is Shaki khan's seal on it. Museum of History of Azerbaijan

The historical development of Azerbaijani can be divided into two major periods: early (c. 16th to 18th century) and modern (18th century to present). Early Azerbaijani differs from its descendant in that it contained a much larger number of Persian, and Arabic loanwords, phrases and syntactic elements. Early writings in Azerbaijani also demonstrate linguistic interchangeability between Oghuz and Kypchak elements in many aspects (such as pronouns, case endings, participles, etc.). As Azerbaijani gradually moved from being merely a language of epic and lyric poetry to being also a language of journalism and scientific research, its literary version has become more or less unified and simplified with the loss of many archaic Turkic elements, stilted Iranisms and Ottomanisms, and other words, expressions, and rules that failed to gain popularity among the Azerbaijani-speaking masses.

Between c. 1900 and 1930, there were several competing approaches to the unification of the national language in Azerbaijan popularized by the literati, such as Hasan bey Zardabi and Mammad agha Shahtakhtinski. Despite major differences, they all aimed primarily at making it easy for semi-literate masses to read and understand literature. They all criticized the overuse of Persian, Arabic, Ottoman Turkish, and other foreign (mainly Russian) elements in both colloquial and literary language and called for a simpler and more popular style.

The Russian conquest of the South Caucasus in the 19th century split the language community across two states; the Soviet Union promoted development of the language, but set it back considerably with two successive script changes[12] – from Perso-Arabic script to Latin and then to Cyrillic – while Iranian Azerbaijanis continued to use the Perso-Arabic script as they always had. Despite the wide use of Azerbaijani in Azerbaijan during the Soviet era, it became the official language of Azerbaijan only in 1956.[13] After independence, Azerbaijan decided to switch back to the Latin script.

In the mid-19th century it was taught in the schools of Baku, Ganja, Shaki, Tbilisi, and Yerevan. Since 1845, it has also been taught in the University of St. Petersburg in Russia. 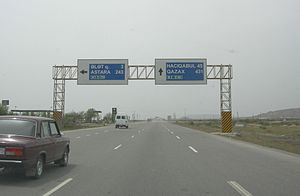 Azerbaijani served as a lingua franca throughout most parts of Transcaucasia (except the Black Sea coast), in Southern Dagestan,[15][16][17] Eastern Turkey, and Iranian Azerbaijan from the 16th century to the early 20th century,[18][19] alongside the cultural, administrative, court literature, and most importantly official language of all these regions, namely Persian.[20] From the early 16th century up to the course of the 19th century, these regions and territories were all ruled by the Iranian Safavids, Afsharids and Qajars, until the cession of Transcaucasia proper and Dagestan by Qajar Iran to Imperial Russia per the 1813 Treaty of Gulistan and the 1828 Treaty of Turkmenchay. Per the 1829 Caucasus School Statute, Azerbaijani was to be taught in all district schools of Ganja, Shusha, Nukha (present-day Shaki), Shamakhy, Guba, Baku, Derbent, Erivan, Nakhchivan, Akhaltsikhe, and Lankaran. Beginning in 1834, it was introduced as a language of study in Kutaisi instead of Armenian. In 1853, Azerbaijani became a compulsory language for students of all backgrounds in all of the South Caucasus with the exception of the Tiflis Governorate.[21]

North Azerbaijani,[22] or North Azeri, is the official language of Azerbaijan. It is closely related to the modern Turkish due to the fact that Azerbaijani language is a Turkic language. It is also spoken in southern Dagestan, along the Caspian coast in the southern Caucasus Mountains, and scattered through Central Asia. There are some 7.3 million native speakers, and about 8 million second-language speakers.

The Shirvan dialect is the basis of Standard Azerbaijani. Since 1992, it has been officially written with a Latin/Roman script in Azerbaijan, but the older Cyrillic script was still widely used in the late 1990s.[23]

South Azerbaijani,[24] or South Azeri, is widely spoken in northwestern Iran (Iranian Azerbaijan) and to a lesser extent in neighboring regions of Iraq and Turkey, with smaller communities in Syria. In Iran, the Persian word for Azerbaijani is Torki,[25] which literally means Turkish; in Azerbaijani it is usually pronounced as Türki. In Iran, it is spoken in East Azerbaijan and West Azerbaijan, Ardabil, Zanjan, and parts of Kurdistan, Hamadan, Markazi, Qazvin and Gilan. It is also widely spoken in Tehran and across Tehran Province, as ethnic Azeris form by far the largest minority in the city and the wider province,[26] comprising about 25%[27] to 1/3,[28][29] of its total population. The CIA World Factbook reports the percentage of South Azerbaijani speakers at around 16 percent of the Iranian population, or approximately 16.9 million people worldwide,[30] and ethnic Azerbaijanis form by far the second largest ethnic group in Iran, thus making the language also the second most spoken language in the nation.[31]

The vowels of the Azerbaijani language are, in their alphabetical order, a, e, ə, ı, i, o, ö, u, ü. There are no diphthongs in Azerbaijani when two vowels come together; when that occurs in some Arabic loanwords, each vowel retains its individual sound.

Before 1929, Azerbaijani was written only in the Perso-Arabic script. In 1929–1938 a Latin alphabet was in use for North Azerbaijani (although it was different from the one used now), from 1938 to 1991 the Cyrillic script was used, and in 1991 the current Latin alphabet was introduced, although the transition to it has been rather slow. In Iran, Azerbaijani is still written in the Perso-Arabic script, and in Dagestan, in Cyrillic script.

The following letters are in Latin (Azerbaijan since 1991), Cyrillic (1958 version, still official in Dagestan) & Perso-Arabic (Iran; Azerbaijan until 1922).

The Azerbaijani language, when written in the Latin or Cyrillic script, transcribes any foreign names into Azerbaijani spelling, e.g. Bush becomes Buş and Schröder becomes Şröder.

Notice that Azerbaijani has informal and formal ways of saying things. This is because there is more than one meaning to "you" in Turkic languages like Azerbaijani and Turkish (as well as in many other languages). The informal you is used when talking to close friends, relatives, animals or children. The formal you is used when talking to someone who is older than you or someone for whom you would like to show respect (a professor, for example). As in many Romance languages, personal pronouns can be omitted, and they are only added for emphasis. Azerbaijani is a very phonetic language, so pronunciation is very easy. Most words are pronounced exactly as they are spelled.