Azerbaijani literature (Azerbaijani: Azərbaycan ədəbiyyatı) refers to the literature written in Azerbaijani, which currently is the official state language of the Republic of Azerbaijan and is widely spoken in northwestern Iran. Azerbaijani is a dialect of the Oghuz branch of Turkic languages, and as such, is mutually intelligible with other Oghuz dialects spoken in Turkey, Iran, Turkmenistan, Georgia, Uzbekistan, Russia, Balkans and Middle East.

The earliest known figure in Azerbaijani literature was Izzeddin Hasanoglu, who composed a divan consisting of Persian and Turkic ghazals.[1][2] In Persian ghazals he used his pen-name, while his Turkic ghazals were composed under his own name of Hasanoghlu.[1] 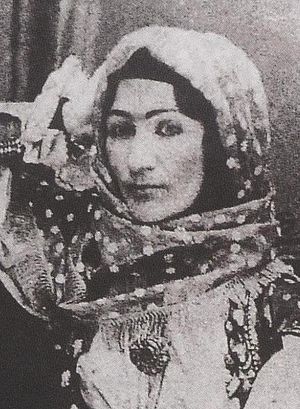 Khurshidbanu Natavan was the daughter of Mehdi Gulu-khan, the last ruler of the Karabakh khanate (1748–1822), she is considered one of the best lyrical poets of Azerbaijan.

In the 14th century, Azerbaijan was under the control of Qara Qoyunlu and Aq Qoyunlu Turkic tribal confederacies. Among the poets of this period were Kadi Burhan al-Din, Haqiqi (pen-name of Jahan-shah Qara Qoyunlu), and Habibi.[3] The end of the 14th century was also the period of starting literary activity of Imadaddin Nesimi,[4] one of the greatest Turkic[5][6][7] Hurufi mystical poets of the late 14th and early 15th centuries[8] and one of the most prominent early Divan masters in Turkic literary history,[8] who also composed poetry in Persian[6][9] and Arabic.[8]

The Divan and Ghazal styles, introduced by Nesimi in Azerbaijani poetry in the 15th century, were further developed by poets Qasem-e Anvar, Fuzuli and Khatai (pen-name of Safavid Shah Ismail I).

The book Dede Qorqud which consists of two manuscripts copied in the 16th century,[10] was not written earlier than the 15th century.[11][12] It is a collection of twelve stories reflecting the oral tradition of Oghuz nomads.[12] Since the author is buttering up both the Aq Qoyunlu and Ottoman rulers, it has been suggested that the composition belongs to someone living between the Aq Qoyunlu and Ottoman Empire.[11] Geoffery Lewis believes an older substratum of these oral traditions dates to conflicts between the ancient Oghuz and their Turkish rivals in Central Asia (the Pechenegs and the Kipchaks), however this substratum has been clothed in references to the 14th-century campaigns of the Aq Qoyunlu Confederation of Turkic tribes against the Georgians, the Abkhaz, and the Greeks in Trabzon.[10]

The 16th-century poet, Muhammed Fuzuli produced his timeless philosophical and lyrical Qazals in Arabic, Persian, and Azerbaijani. Benefiting immensely from the fine literary traditions of his environment, and building upon the legacy of his predecessors, Fizuli was to become the leading literary figure of his society. His major works include The Divan of Ghazals and The Qasidas.

In the 16th century, Azerbaijani literature further flourished with the development of Ashik (Azerbaijani: Aşıq) poetic genre of bards. During the same period, under the pen-name of Khatāī (Arabic: خطائی‎‎ for sinner) Shah Ismail I wrote about 1400 verses in Azerbaijani,[13] which were later published as his Divan. A unique literary style known as qoshma (Azerbaijani: qoşma for improvisation) was introduced in this period, and developed by Shah Ismail and later by his son and successor, Shah Tahmasp and Tahmasp I.[14]

In the span of the 17th century and 18th century, Fizuli's unique genres as well Ashik poetry were taken up by prominent poets and writers such as Qovsi of Tabriz, Shah Abbas Sani, Agha Mesih Shirvani, Nishat, Molla Vali Vidadi, Molla Panah Vagif, Amani, Zafar and others.

Along with Anatolian Turks, Turkmens and Uzbeks, Azerbaijanis also celebrate the epic of Koroglu (from Azerbaijani: kor oğlu for blind man's son), a legendary hero or a noble bandit of the Robin Hood type.[15] Several documented versions of Koroglu epic remain at the Institute for Manuscripts of the National Academy of Sciences of Azerbaijan.[2]

Under the Soviet rule, particularly during Joseph Stalin's reign, Azerbaijani writers who did not conform to the party line were persecuted. Bolsheviks sought to destroy the nationalist intellectual elite established during the short-lived Azerbaijan Democratic Republic, and in the 1930s, many writers and intellectuals were essentially turned into mouthpieces of Soviet propaganda.

Although there were those who did not follow to the official party line in their writings. Among them were Mahammad Hadi, Abbas Sahhat, Huseyn Javid, Abdulla Shaig, Jafar Jabbarly, and Mikayil Mushfig, who in their search for a means of resistance[citation needed], turned to the clandestine methodologies of Sufism, which taught spiritual discipline as a way to combat temptation.[16]

When Nikita Khrushchev came to power in 1953 following Stalin's death, the harsh focus on propaganda began to fade, and writers began to branch off in new directions, primarily focused on uplifting prose that would be a source of hope to Azerbaijanis living under a totalitarian regime.

An influential piece of post-World War II Azerbaijani poetry, Heydar Babaya Salam (Greetings to Heydar Baba) was written by Azeri poet Mohammad Hossein Shahriar who had already established himself as a notable. This poem, published in Tabriz in 1954 and written in colloquial Azerbaijani, became popular among Iranians and the people of Azerbaijan. In Heydar Babaya Salam, Shahriar expressed his identity as an Iranian Azerbaijani attached to his homeland, language, and culture. Heydar Baba is a hill near Khoshknab, the native village of the poet.