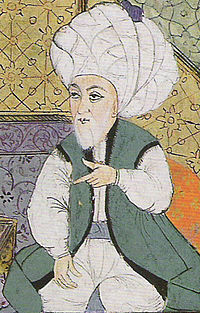 Bâkî was born to a poor family in Constantinople, his father being a muezzin at the Fatih Mosque. Originally, his family apprenticed him to a harness-maker, but he would often skip work to attend classes at a nearby medrese, or Islamic school. Because of this, his family eventually allowed him to formally attend school. Bâkî was a good student, and he attended the lectures of many of the famous lecturers of the time. It was during his school years that his interest in and talent for poetry began to take shape, helped largely by the established poet Zâtî (ذاتی) (1471–1548). After completing school, he worked for some time as a teacher, but later, as his poetic fame began to grow, he was granted a number of different positions—generally as a kadı (ﻗﺎضی), or Islamic judge—in the Ottoman bureaucracy. Bâkî died in Istanbul in the year 1600.

Bâkî was always very close to the Ottoman palace, particularly during the reign of Süleymân I, with whom he had good relations. During the subsequent reigns of Selim II and Murad III, he remained close to the palace and to state affairs, and received a great deal of attention and interest both from the public and the palace.

Bâkî lived during the height of the Ottoman Empire, and this affected his poetry greatly. Love, the joy of living, and nature are the primary subjects of his poems. Although almost no Sufi influence is found in his poetry—as it is in many other Ottoman-era poets—his concept of love as revealed in his poetry was not entirely divorced from the Sufi concept thereof.

Bâkî wrote a relatively small number of works in his lifetime, as he always stated that he wanted to make works great in quality rather than quantity[citation needed]. One of his most celebrated works is his Mersiye-i Hazret-i Süleymân Hân (مرشيه ﺣﻀﺮت سليمان خان; "Elegy for His Excellency Süleymân Khan"), among the most famed of elegiac works in Turkish literature.