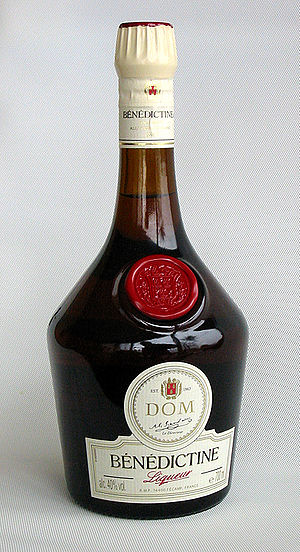 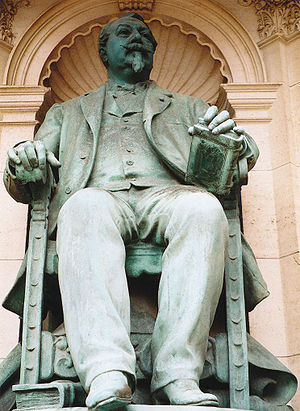 A statue of Alexandre Le Grand, founder of the Palais Bénédictine

Bénédictine is a herbal liqueur beverage developed by Alexandre Le Grand in the 19th century and produced in France.

It is claimed that at the Benedictine Abbey of Fécamp in Normandy, monks had developed a medicinal aromatic herbal beverage which was produced until the abbey's devastation during the French Revolution, but in fact Alexandre Le Grand invented the recipe himself, helped by a local chemist, and he told this story to connect the liqueur with the city history to increase sales.[1]

He began production under the trade name "Bénédictine", using a bottle with an easily recognizable shape and label. The family eventually sold the company to Martini and Rossi, which was in turn bought by Bacardi.

The recipe is a closely guarded trade secret, purportedly known to only three people at any given time. So many people have tried to reproduce it that the company maintains on its grounds in Fécamp a "Hall of Counterfeits" (Salle des Contrefaçons). The bottle and label have been imitated, as has the name Bénédictine. The company prosecutes those it feels are infringing on its intellectual property.

The manufacturing process involves several distillations which are then blended.

Every bottle of Bénédictine has the initials D.O.M. on the label, which stands for "Deo Optimo Maximo" ("To God, most good, most great"). This abbreviation is commonly used at the beginning of documents of the Benedictine Order as a short dedication of the work.

Burnley Miners' Club in Lancashire, United Kingdom is the world's biggest single consumer of Bénédictine liqueur, after Lancashire regiments acquired a taste for it during the First World War.[2][3] Burnley Football Club also sells Bénédictine on match days, making them the only English club to do this.[4][5]

Besides the B & B, cocktails using Bénédictine include the Frisco,[6] Derby, Singapore Sling,[7] Vieux Carré,[8] Cornell Special,[9][10] and Monte Carlo.[citation needed]