In the Vietnamese name below, Nguyễn Phúc is the surname.

Bảo Đại (lit. "keeper of greatness", 22 October 1913 – 30 July 1997), born Nguyễn Phúc Vĩnh Thụy, was the 13th and final emperor of the Nguyễn Dynasty, which was the last dynasty of Vietnam.[1] From 1926 to 1945, he was king of Annam. During this period, Annam was a protectorate within French Indochina, covering the central two-thirds of the present-day Vietnam. Bảo Đại ascended the throne in 1932.[2]

The Japanese ousted the Vichy-French administration in March 1945 and then ruled through Bảo Đại. At this time, he renamed his country “Vietnam”. He abdicated in August 1945 when Japan surrendered.

It has been widely held that Vietminh or Ho Chi Minh founded the independent Democratic Republic of Vietnam by themselves. However, the fact is, as Stanley Karnow in his classic book "Vietnam - A History" has put it, "Nothing has reinforced the Vietminh cause more than the mercurial Bao Dai's decision to abdicate. For his gesture conferred the "mandate of heaven' on Ho, giving him the legitimacy that, in Vietnamese eyes, had traditionally resided in the emperor."

Further from 1949 until 1955, Bảo Đại was the chief of state of the State of Vietnam (South Vietnam). Bảo Đại was criticized for being too closely associated with France and spending much of his time outside of Vietnam. Prime Minister Ngô Đình Diệm eventually ousted him in a fraudulent referendum vote in 1955.

Bảo Đại was born Prince Nguyễn Phúc Vĩnh Thụy in the Palace of Doan-Trang-Vien, part of the compound of the Purple Forbidden City in Huế, the capital of Vietnam. He later was given the name Nguyễn Vĩnh Thụy. His father was King Khải Định of Annam. His mother was the king's second wife, Tu Cung, who was renamed Doan Huy upon her 1913 marriage. She held various titles over the years that indicated her advancing rank as a favored consort until she eventually became Empress Dowager in 1933. Vietnam had been ruled from Huế by the Nguyễn Dynasty since 1802. The French government, which took control of the region in the late 19th century, split Vietnam into three areas: the protectorates of Annam and Tonkin and the colony of Cochinchina. The Nguyễn Dynasty was given nominal rule of Annam.[citation needed]

At the age of nine, Prince Nguyễn Phúc Vĩnh Thụy was sent to France to be educated at the Lycée Condorcet and, later, the Paris Institute of Political Studies. In 1926 he was made the emperor after his father's death and took the name Bảo Đại ("Protector of Grandeur" or "Keeper of Greatness"). He did not ascend to the throne given his age and returned to France to continue his studies.[citation needed] 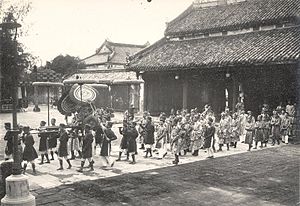 Bảo Đại and his followers on accession

Bảo Đại had five other wives, three of whom he wed during his marriage to Nam Phương:

One of his concubines was a dancer from Hanoi, Lý Lệ Hà

In 1940, during the second World War, coinciding with their ally Germany's invasion of France, the Japanese invaded French Indochina. While they did not eject the French colonial administration, the occupation authorities directed policy from behind the scenes in a parallel of Vichy France.

The Japanese promised not to interfere with the court at Huế, but in 1945, after ousting the French, coerced Bảo Đại into declaring Vietnamese independence from France as a member of Japan's "Greater East Asia Co-Prosperity Sphere"; the country then became the Empire of Vietnam. The Japanese had a Vietnamese pretender, Prince Cường Để, waiting to take power in case the new emperor's "elimination" was required. Japan surrendered to the Allies in August 1945, and the Viet Minh under the leadership of Hồ Chí Minh aimed to take power in a free Vietnam. Due to his recent Japanese associations, Hồ was able to persuade Bảo Đại to abdicate on 25 August 1945, handing power over to the Việt Minh — an event which greatly enhanced Hồ's legitimacy in the eyes of the Vietnamese people. Bảo Đại was appointed "supreme advisor" to Hồ's Democratic Republic of Vietnam in Hanoi, which asserted its independence on 2 September 1945, but was ousted by the French in November 1946.[3]

Return to power and Indochina War

As Vietnam descended into armed conflict — rival factions clashed with each other and also with the remaining French — Bảo Đại left Vietnam after a year in his "advisory" role, living in both Hong Kong and China. The French persuaded him to return in 1949 to serve as "head of state" (quốc trưởng), not as "emperor" (Hoàng Đế). He soon returned to France, however, and showed little interest in the affairs of his own country when his own personal interests were not directly involved.

The communist victory in China in 1949 led to a revival of the fortunes of the Việt Minh. The United States extended diplomatic recognition to Bảo Đại's government in March 1950, soon after communist nations recognized Hồ's government. The outbreak of the Korean War in June led to U.S. military aid and active support of the French war effort in Indochina, now seen as anti-communist rather than colonialist.

In 1955, Diệm called for a referendum to remove Bảo Đại and establish a republic with Diệm as president. The campaign leading up to the referendum was punctuated by personal attacks against the former emperor. His supporters had no way to refute them, as campaigning for Bảo Đại was forbidden. The October 23 referendum was widely reckoned as fraudulent, showing an implausible 98% in favor of a republic. As it turned out, the official results showed that the total number of votes for a republic exceeded the total number of registered voters by some 380,000—an obvious sign of fraud.[5] 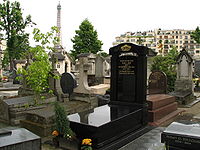 In 1957, during his visit to Alsace region, he met Christiane Bloch-Carcenac with whom he had an affair for several years. This relationship gave birth to his last child, Patrick Edward Bloch, who still lives in Alsace in France.[6]

In 1972, Bảo Đại issued a public statement from exile, appealing to the Vietnamese people for national reconciliation, stating, "The time has come to put an end to the fratricidal war and to recover at last peace and accord". At times, Bảo Đại maintained residence in southern France, and in particular, in Monaco, where he sailed often on his private yacht, one of the largest in Monte Carlo harbor. He still reportedly held great influence among local political figures in the Quảng Trị and Thừa Thiên provinces of Huế. The Communist government of North Vietnam sent representatives to France hoping that Bảo Đại would become a member of a coalition government which might reunite Vietnam, in the hope of attracting his supporters in the regions wherein he still held influence.[citation needed]

As a result of these meetings, Bảo Đại publicly spoke out against the presence of American troops on the territory of South Vietnam, and he also criticized President Nguyễn Văn Thiệu's regime in South Vietnam. He called for all political factions to create a free, neutral, peace-loving government which would resolve the tense situation that had taken form in the country.

In 1982, Bảo Đại, his wife Monique, and other members of the former imperial family of Vietnam visited the United States. His agenda was to oversee and bless Buddhist and Caodaiist religious ceremonies, in the Californian and Texan Vietnamese-American communities.

Throughout Bảo Đại's life in both Vietnam and in France, he remained unpopular among the Vietnamese populace as he was considered a political puppet for the French colonialist regime, for lacking any form of political power, and for his cooperation with the French and for his pro-French ideals. The former emperor clarified, however, that his reign was always a constant battle and a balance between preserving the monarchy and the integrity of the nation versus fealty to the French authorities. Ultimately, power devolved away from his person and into ideological camps and in the face of Diem's underestimated influences on factions within the empire.[7]

Bảo Đại died in a military hospital in Paris, France, on 30 July 1997. He was interred in the Cimetière de Passy. After his death, his eldest son, Crown Prince Bảo Long, inherited the position of head of the Nguyễn Dynasty.

The last cash coin ever produced in the world bears the name of Bảo Đại in Chinese characters.There are three types of this coin. Large cast piece with 10 van inscription on the reverse, medium cast piece with no reverse inscription, and small struck piece. All were issued in 1933.

Bảo Đại's memoirs have been published in French and in Vietnamese; the Vietnamese version appears considerably longer.