From Infogalactic: the planetary knowledge core
(Redirected from B-Ration)
Jump to: navigation, search 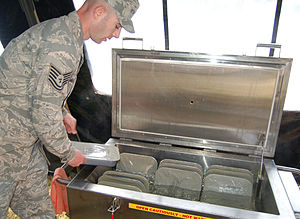 B ration (or Type B Ration) is a term used in the United States military for a meal provided to troops which was prepared using canned or preserved ingredients. 'B' ration meals may be prepared in field kitchens and served in the field, or served in garrisons without adequate refrigeration or freezer facilities.

'B' rations differ from 'A' rations in that they do not use fresh, frozen, or refrigerated ingredients. They are distinguished from field rations, formerly known as C rations (such as the Meal, Ready-to-Eat or its predecessor, the Meal, Combat, Individual ration) in that they are ordinarily prepared in field kitchens instead of being distributed at the unit or individual level for immediate consumption. 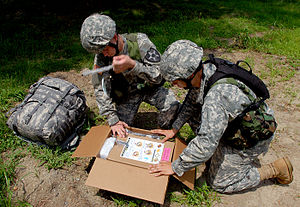 UGR-Express. The soldiers depicted are activating the included heating unit by pulling the tab(s)

Whereas historical 'B' rations were often prepared by trained personnel in field kitchens, the term increasingly applies to prepackaged bulk rations that require minimal additional preparation in the field today, more analogous to group feeding rations such as 5-in-1 ration or 10-in-1 food parcel of the past. 'B' rations today may include the Unitized Group Ration B (UGR-B), a hybrid meal kit designed to feed a group for one meal. The UGR-B has several different varieties, including a tray-based heat and serve (T-rat) form, heated by hot water immersion when a field kitchen is not available,[1] or the express form, with a self-heating module and disposable accessories.[2]