From Infogalactic: the planetary knowledge core
Jump to: navigation, search
This article is about the arena located in Sunrise, Florida. For information about the skyscraper in Charlotte, North Carolina, see BB&T Center. For the arena at Northern Kentucky University, see BB&T Arena. 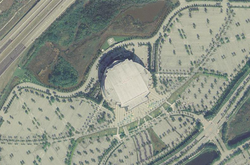 An overhead view of BB&T Center

The BB&T Center (previously known as Broward County Civic Arena, National Car Rental Center, Office Depot Center, and BankAtlantic Center) is an indoor arena located in Sunrise, Florida. It is home to the Florida Panthers of the National Hockey League. It was completed in 1998, at a cost of $185 million, almost entirely publicly financed, and features 70 suites and 2,623 club seats.[1]

In 1992, Wayne Huizenga obtained a new NHL franchise that would eventually become the Florida Panthers.[4] Until the team had an arena of their own, they initially played at the now-demolished Miami Arena, sharing the venue with the NBA's Miami Heat.[5] Sunrise City Manager Pat Salerno made public a $167-million financing and construction plan for a civic center near the Sawgrass Expressway in December 1995,[6] and Broward County approved construction in February 1996.[7] In June 1996, the site was chosen by the Panthers, and in July, Alex Muxo gathered more than a dozen architects, engineers and contractors for the first major design brainstorming session. Architects Ellerbe Becket were given 26 months to build the arena, which had to be ready by August 30, 1998, to accommodate the 1998-99 NHL season. Despite never having designed a facility that had taken less than 31 months from start to finish, they accepted the job.[4]

Seventy suites were completed with wet bars, closed circuit monitors and leather upholstery. Averaging over 650 square feet (60 m2), the suites are the largest in the country for this type of facility. All the activity was generated by over 50 subcontractors and 2.3 million man hours without a single injury.[3] Known as Broward County Civic Center during construction, the naming rights were won in July 1998 by National Car Rental—a company purchased by Huizenga in January 1997—leading to the venue being named the National Car Rental Center.[8] A certificate of occupancy was given on September 12, and the arena opened on October 3 with a Celine Dion concert. The next day, Elton John performed, and on October 9 the Panthers had their first home game at the new arena.[9]

As NRC's new parent company ANC Rental went bankrupt in 2002, the Panthers sought a new sponsor for the arena.[10] It later became the Office Depot Center in the summer of 2002, and the BankAtlantic Center on September 6, 2005. As BB&T purchased BankAtlantic in July 2012, two months later the arena was rebranded as BB&T Center.[11]

BB&T Center is currently the largest arena in Florida and second-largest in the Southeastern United States, behind Greensboro Coliseum.

During the 2011 offseason, the BB&T Center replaced the original green seats in the lower bowl with new red seats, as a part of the Panthers "We See Red" campaign.[12]

In October 2012, Sunrise Sports and Entertainment completed installation of the Club Red seating sections encompassing the center ice seats during hockey games. It is an all-inclusive nightclub experience following the trend of other sports and entertainment venues in incorporating high-end seating sections and clubs.[13]

The ADT Club located on the club level offers food and beverage. The Duffy’s Sky Club at the BB&T Center encompasses approximately 8,000 square feet and caters to approximately 500 guests. The Penalty Box offers fans another seating and dining option inside the BB&T Center. The Legends Lounge is a restaurant located on the Lexus Suite Level and offers sit down service.[citation needed]

The BB&T Center is also the home for private loge box seating. 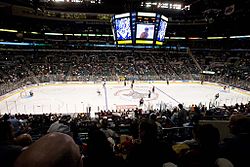 Inside the BB&T Center during a Florida Panthers game.

In addition to the Panthers, the arena was formerly home to the Florida Pit Bulls of the American Basketball Association, the Miami Caliente of the Lingerie Football League, and the Florida Bobcats of the AFL, along with the only season of the Florida ThunderCats. This arena also serves as the host for the Orange Bowl Basketball Classic held every December in conjunction with the namesake college football game.

U2 performed at the stadium on March 24 and 26, 2001, during their Elevation Tour, in front of a total sold out crowd of 37,969 people. They were the opening dates of the Elevation tour bringing fans from all over the world to South Florida.

Depeche Mode performed at the stadium two times: the first one was on September 5, 2009, during their Tour of the Universe, in front of a crowd of 12,665 people. The second one was on September 15, 2013, during their Delta Machine Tour, in front of a sold out crowd of 10,760 people. The 2009 show was recorded for the group's live albums project Recording the Universe.

The arena has held boxing and mixed martial arts events such as EliteXC: Heat featuring the main event of Seth Petruzelli and Kimbo Slice took place on October 4, 2008. On February 15, 2009, a lightweight bout between Nate Campbell and Ali Funeka took place in the arena.

Strikeforce MMA made their debut at the arena on January 30, 2010, with the Strikeforce: Miami event on Showtime.

The Professional Bull Riders brought their Built Ford Tough Series tour to the BB&T Center in September 2005 for a bull riding event, which was won by Kody Lostroh (who ultimately became the Rookie of the Year that same year).