BBC Four is a British television channel operated by the British Broadcasting Corporation (BBC) and available to digital television viewers on Freeview, IPTV, satellite, and cable.

BBC Four launched on 2 March 2002 at 19.00 GMT, having been delayed from the original planned 2001 launch. The channel replaced BBC Knowledge, an educational and cultural channel which had undergone many changes throughout its lifetime; in its final format it carried a schedule of documentaries and art programming, essentially a test of the new BBC Four schedule. BBC Four would rebrand this channel, and bring it into line with the well recognised BBC One and Two brands at the same time. Planning for the new channel, along with the new BBC Three, had been in progress since October 2000; however, the incumbent government delayed approving the new BBC digital plans. The BBC Four plans were approved earlier, and as a result launched before BBC Three.

BBC Four was different from the old BBC Knowledge: the channel would be more heavily promoted with more new and original programming and the channel would not be broadcast 24 hours a day. This was because on the Freeview digital terrestrial platform, BBC Four is broadcast in a statistically multiplexed stream in Multiplex B that timeshares with the CBeebies channel (which is on air from 6.00 until 19.00). As a result, BBC Four broadcasts from 19.00 to around 4.00 each night, with an hour's down-time and promotions for CBeebies before the start of that channel's schedule.

Channel Editors of BBC Four have been:

On 16 July 2013, the BBC announced that a high-definition (HD) simulcast of BBC Four would be launched by early 2014.[12] The channel launched on 10 December 2013, though will roll-out nationwide up to June 2014 (as will BBC News HD and CBeebies HD).[13] The channel broadcasts on the BBC's new HD multiplex on Freeview and shares its stream with CBeebies HD as they both air at different times. Prior to launch, the majority of BBC Four's HD output was broadcast on the BBC HD channel before its closure on 26 March 2013.

Main article: List of programmes broadcast by the BBC

BBC Four’s primary role is to reflect a range of UK and international arts, music and culture. It should provide an ambitious range of innovative, high quality programming that is intellectually and culturally enriching, taking an expert and in-depth approach to a wide range of subjects. 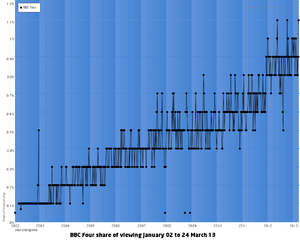 The first evening's BBC Four programmes were simulcast on BBC Two.[1] BBC Four is notable for first showing Larry David's Seinfeld follow-up, Curb Your Enthusiasm,[14] Armando Iannucci's cutting political satire, The Thick of It, The Chaser's War on Everything, Flight of the Conchords, Mad Men and Danish thriller, The Killing.

The channel broadcasts a mixture of art and science documentaries, vintage drama (including many rare black-and-white programmes), and non-English language productions such as films from the Artificial Eye catalogue, the French thriller Spiral and the Swedish detective series Wallander.[15] BBC Four further supports foreign language films with its annual World Cinema Award which has been running since 2004.

On weekdays at 19.00 and weekends at 21:00, the channel shows a 30-minute global news programme called World News Today, simulcast with and produced by BBC World News. It screens a number of documentaries such as The Century of the Self and The Trials of Henry Kissinger. The channel is also home to many political travel shows such as Holidays in the Axis of Evil which features investigative journalism.

Drama has given the channel some of its most popular programmes, with The Alan Clark Diaries (2003) and Kenneth Williams: Fantabulosa! (2006) being among the highest rated, with over 800,000 viewers. The highly-acclaimed Hattie, broadcast in 2011, holds the record for BBC4's best ever consolidated ratings of 2m / 8%.[16] Before that The Curse of Steptoe brought the channel its highest audience figures, estimated as 1.41 million viewers, a 7% share of multichannel audiences between 21.00 and 22.05, based on overnight returns.[17] The official audience figures for the broadcast, including time-shifting, were later published as 1,625,000.[18] Another notable production was a live re-make of the 1953 science-fiction serial The Quatermass Experiment, adapted from the original scripts into a single, two-hour version (though on the night it in fact underran considerably, lasting less than 1 hour 40 minutes), broadcast on the evening of Saturday 2 April 2005. Discounting BBC Four's previous live relays of theatrical Shakespeare productions, this was the first live made-for-television drama to be broadcast by the BBC for twenty years.

Another notable programme broadcast on BBC Four is Charlie Brooker's Screenwipe which contains reviews of current shows, as well as stories and commentary on how television is produced. The show is presented by broadcaster Charlie Brooker.

The channel is also curator and leader of the BBC Archive project whose aim is that the BBC's television archive is re-broadcast as much as appropriate so that the Archive can be enjoyed again and not isolated.[19]

Some output from BBC Four (documentaries rather than foreign films) was for a time repeated on BBC Two in a 'BBC Four on Two' branded area, although this was often in a late night broadcast slot after Newsnight and has since been discontinued.

According to BARB the comedy panel game QI has the highest ratings of any show on BBC Four.[20]

At the Edinburgh International Television Festival, BBC Four won the Non-Terrestrial Channel of the Year award in 2004, 2006 and 2012.

In 2012 Dirk Gently became the first continuing drama series produced for the channel.[21]

When the channel first started airing, it used the slogan "Everyone Needs A Place To Think", but the BBC stopped using this several months after the launch. However the BBC Four logo and above slogan can be found, engraved on benches along the South Bank in London, between the London Eye and Waterloo Bridge.

On 10 September 2005, the channel began showing new idents comprising a central BBC Four logo surrounded by four quadrants which show different stages of the same footage thus making for a sort of optical illusion; for example, a swimming pool where a person on an inflatable ring appears in the bottom-left corner, though ripples don't enter the remaining quarters. Although the image appears as one at the start of the ident by the end it is clearly four separate images.