BBC Look North is the BBC's regional television news service for North East England, Cumbria and North Yorkshire. The service is produced and broadcast from the BBC Broadcasting Centre on Barrack Road in Newcastle upon Tyne with district newsrooms based in Carlisle, Durham, Middlesbrough and York.

The programme can be watched in any part of the UK (and Europe) from Astra 2E on Freesat channel 956 and Sky channel 955. It no longer broadcasts on analogue, since the digital switchover in September 2012, and digital terrestrial from the Bilsdale, Caldbeck, Chatton and the Pontop Pike transmitters. The latest edition of Look North is also available to watch on the BBC iPlayer. 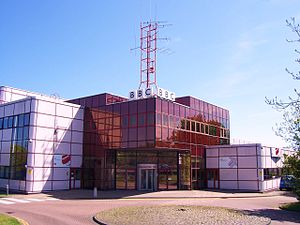 Prior to the start of Look North, the BBC television region for the North East and Cumbria launched in 1959 from studios at 54 New Bridge Street in Newcastle City Centre. The region began receiving its own nightly news bulletins, originally presented by George House and Tom Kilgour. Previously, the area was served by a pan-regional bulletin from Manchester entitled News from the North, broadcast across the whole of Northern England from 30 September 1957 onwards.

Three years after the launch of the television service, the bulletins were expanded to 20 minutes and relaunched as a daily magazine programme, Home at Six, presented by Frank Bough. After Bough left to join BBC Sport in 1964, Home at Six was relaunched with a new name and a new presenter - Mike Neville, an actor & continuity announcer for Tyne Tees Television who had been anchor of North East Newsview, a nightly regional news programme, for only a few months. Neville soon became a household name and spent the next thirty two years at the BBC in Newcastle, presenting Look North as well as making regular appearances on Nationwide.

For a short period in the late 1980s, Cumbria was switched to the BBC North West region and began receiving North West Tonight instead of Look North, along with a short lunchtime news opt-out. The North East and Cumbria region was reformed after campaigning by viewers in Cumbria that they were being overlooked in favour of news from the more populous areas of the north west, such as Greater Manchester and Merseyside. It was during this time that on 16 January 1988, BBC North East moved to brand new purpose built studios nicknamed 'The Pink Palace' on Barrack Road (A189) in Spital Tongues, along with Radio Newcastle.

On weekdays, Look North broadcasts six three-minute opt-outs during BBC Breakfast at 27 and 57 minutes past each hour. A fifteen-minute lunchtime programme follows at 1:30pm and a short mid-afternoon update at 3pm before the main half-hour edition at 6:30pm. A short 30-second headlines update during the 8pm BBC News update and a seven-minute late update is shown at 10:25pm, following the BBC News at Ten.