From Infogalactic: the planetary knowledge core
Jump to: navigation, search
File:Logo bbcnow.png
The official logo of the
BBC National Orchestra of Wales 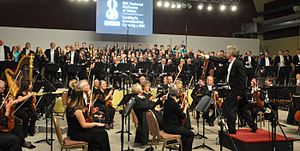 The BBC National Orchestra of Wales (BBC NOW) (Welsh: Cerddorfa Genedlaethol Gymreig y BBC) is a Welsh symphony orchestra and one of the BBC's five professional orchestras. The BBC NOW is the only professional symphony orchestra organisation in Wales, occupying a dual role as both a broadcasting orchestra and national orchestra. The BBC NOW has its administrative base in Cardiff, at the BBC Hoddinott Hall on the site of the Wales Millennium Centre, since January 2009.

The BBC NOW is the orchestra-in-residence at St David's Hall, Cardiff, and also performs regularly throughout Wales and beyond, including international tours and annual appearances at the Royal Albert Hall in London at the BBC Proms. Broadcasting work includes studio sessions for BBC Radio and television, although the orchestra’s concerts form the bulk of its broadcasts, transmitted primarily on BBC Radio 3 but also on BBC Radio Wales, BBC Radio Cymru and BBC television. The orchestra records many soundtracks for BBC television, including Doctor Who, Torchwood, Human Planet, and Earthflight. 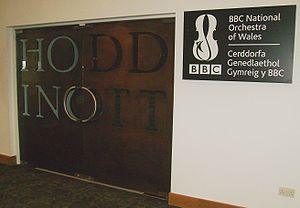 Entrance to the BBC Hoddinott Hall 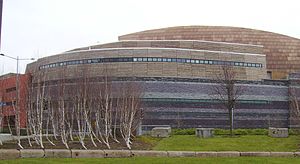 Tadaaki Otaka, principal conductor from 1987 to 1995, is currently the BBC NOW's conductor laureate. Richard Hickox, principal conductor from 2000 to 2006, was the orchestra's conductor emeritus until his death in November 2008. In July 2011, the BBC NOW announced the appointment of Thomas Søndergård as its 14th principal conductor, effective with the 2012-2013 season, for an initial contract of 4 years.[1][2] Past principal guest conductors have included Jac van Steen. François-Xavier Roth was the past associate guest conductor of the BBC NOW. In December 2015, the BBC NOW announced the appointment of Xian Zhang as its next principal guest conductor, effective with the 2016-2017 season, with an initial contract of 3 years. She is the first female conductor named to a titled post with any BBC orchestra.[3] Past Composers-in-Association have included B Tommy Andersson. Huw Watkins is currently the BBC NOW's Composer-in-Association, contracted for the period of 2015-2018. Adrian Partington is the current artistic director of the BBC National Chorus of Wales.

In addition to its recording work for the BBC, the BBC National Orchestra of Wales has an extensive commercial discography with such labels as Chandos and Hyperion. These include recorded cycles of music of Lennox Berkeley and Michael Berkeley, Frank Bridge,[4] and Edmund Rubbra. Selections of the BBC NOW's discography include:

Works premiered by the orchestra include: