The region is the controlling centre for the local radio stations BBC Tees, BBC Radio Cumbria and BBC Radio Newcastle. The three stations simulcast some programmes, as well as the overnight programmes offered by BBC Radio 5 Live.

BBC North East & Cumbria began television broadcasting in 1959, following the separation of the region from the Manchester based BBC North. Up until that point, the Manchester-based operation had been serving the entire North of England with nightly news bulletins. The new service from Newcastle introduced localised bulletins, read originally by George House and Tom Kilgour. By 1962, the bulletins became a 20-minute magazine programme called Home at Six, presented by Frank Bough.

Two years later, the arrival of former Tyne Tees Television presenter Mike Neville coincided with a relaunch as Look North. In 1986, transmissions from the Caldbeck transmitter, to the majority of Cumbria, was transferred from BBC North East to BBC North West, as it was believed the area would be served better from Manchester. However, following complaints from local regions, the transmitter was transferred back to BBC North East in 1990.

The region was renamed BBC North East & Cumbria in 1997, coinciding with the adoption of the new BBC logo and the new BBC One ident package. The on-screen name was adapted slightly to BBC NE & Cumbria in 2002, following the adoption of the Dancer idents for BBC One, as the regional name needed to fit inside the box logo. On the next batch of new "circle" idents the full North East and Cumbria name was used. 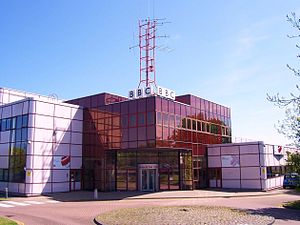 BBC North East & Cumbria has its headquarters and studios at Broadcasting Centre, Spital Tongues, Newcastle upon Tyne. The first live broadcast from the building was on Saturday 16 January 1988, with the first Look North broadcast the following Monday. The building itself housed two studios, A and B, with the studio complex housing the regional news team, BBC Radio Newcastle and some network productions, with BBC North East specialising in children's television. Look North was based in the large studio A, but moved to the smaller studio B when a network production was using studio A. Look North was permanently moved to studio A in 2000 following the reduction in the number of network productions. This move prevented the studio itself from being closed, as happened in the Midlands and the North West; fortunately the studio was not too big, so could house the programme comfortably. The building itself has distinctive architecture, with glass panels and walls coloured in varying shades of pink, resulting in the building gaining the nickname from local residents and staff of "The Pink Palace".[1]

Following the launch of the service, and prior to the move to Broadcasting Centre, the BBC was based at Broadcasting House at New Bridge Street in Central Newcastle, in a former lying-in hospital, which housed the news service, a single studio for Look North and BBC Radio Newcastle. This building, in a central location in the city on New Bridge Street, proved just big enough for their needs. However, when technology needed upgrading, it turned out to be easier to build a new studio complex, rather than refit the small building. It was last used on Friday 15 January 1988.