BBC Radio 4 Extra is a British digital radio station broadcasting archive repeats of comedy and drama programmes nationally, 24 hours a day. It is the principal broadcaster of the BBC's spoken-word archive, and as a result the majority of its programming originates from that archive. It also broadcasts extended and companion programmes to those broadcast on sister station BBC Radio 4, and provides a "catch-up" service for certain Radio 4 programmes.

The station launched in December 2002 as BBC7, broadcasting a similar mix of archive comedy, drama and current children's radio. The station was relaunched as Radio 4 Extra in April 2011. For the first quarter of 2013, Radio 4 Extra had a weekly audience of 1.642 million people and had a market share of 0.95%.[1]

The station was initially launched as BBC7 on 15 December 2002 by comedian Paul Merton. The first programme was broadcast at 8pm and was simulcast with Radio 4.[3] The station, referred to by the codename 'Network Z' while in development, was so named to reflect the station's presence on the internet and on digital television in addition to radio.[3][4] The station broadcast mostly archived comedy and drama, in that the programme was either three or more years old or had been broadcast twice on their original station.

The station also broadcast a themed section for Children's programmes. This section carried a variety of programmes, including The Little Toe Radio Show (later renamed CBeebies Radio), aimed at younger children and consisting of short serials, stories and rhymes, and The Big Toe Radio Show with phone-ins, quizzes and stories for the 8+ age group. The segment also hosted the only news programme on the network presented by the Newsround team.

The station won the Sony Radio Academy Award for station sound in 2003, was nominated for the Promo Award in 2004, and in 2005 received a silver for the Short-Form award, plus nominations in the speech and digital terrestrial station-of-the-year sections. Because of the station's archive nature the station was scheduled, produced and researched by 17 people, excluding presenters.[3]

The station was renamed on 4 October 2008 to BBC Radio 7 in an effort to bring it in line with other BBC Radio brands.[4] It also coincided with the introduction of a new network logo for the station.

By adding some inviting new programmes and variations of some old favourites, we will encourage more listeners to find and enjoy what this imaginative digital station has to offer.

During this later period, Radio 7 saw growth in its audience, unusual for a digital station, with a growth rate of 9.5% annually in 2010, going from 931,000 listeners in the first quarter of that year[6] to 949,000 a quarter later, making it the second most listened to BBC digital radio station at the time.[7] However, despite this growth, the audience of children between 4 and 14 was reported to be only at 25,000 and in February 2011 the BBC Trust approved a reduction in hours dedicated to children from 1,400 to 350.[8][9]

The BBC announced their intention to relaunch the station on 2 March 2010[10] and following a public consultation, the proposal was approved by the corporation's governing body the BBC Trust in February 2011.[8][11] As a result, the station relaunched as BBC Radio 4 Extra on Saturday 2 April 2011. The relaunched station contained much of the same mix of programming with some new additions that reflected the new alignment with Radio 4, many of which were extended, archive or spin offs of flagship Radio 4 programmes. 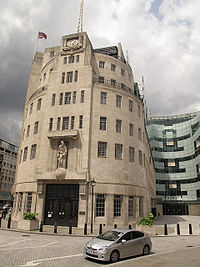 BBC Radio 4 Extra is broadcast from Broadcasting House in central London, although due to the nature of the channel very little of the channel's content is broadcast live from there with even the continuity announcements being pre-recorded.. The channel uses ten continuity announcers to link between programmes. These currently are Wes Butters, Kathy Clugston, Jim Lee, Joanna Pinnock, Susan Rae, Neil Sleat, Alan Smith, Zeb Soanes, Luke Tuddenham and Steve Urquhart.[12] Previous presenters, including those presenting Radio 7, include Penny Haslam, Helen Aitken, Rory Morrison, Alex Riley and Michaela Saunders.[13]

The station only operates on digital networks and so has no allocated analogue radio signal. Instead it is broadcast over the internet on the BBC website, on services such as Radioplayer and TuneIn and for users of IPTV's.[14] It is also available on Digital radio and television services including digital terrestrial provider Freeview, cable television providers including Virgin Media and on satellite television providers Freesat and Sky who receive their signal from the Astra 2E satellite.[14] The pan-European nature of this satellite means that the signal can be received across northern Europe.

The controller of the station is Gwyneth Williams and is answerable to the Radio board in the BBC.[15]

Although the current station is a rebranding of Radio 7 and contains a similar mix of archived programming, content has been brought further in line with BBC Radio 4 with new additions based upon their schedule. These include extended versions of programmes such as The Now Show, The News Quiz and Desert Island Discs, the broadcast of archived editions of the latter as Desert Island Discs Revisited and the addition of the programme Ambridge Extra, a more youth-orientated version of long-running radio soap The Archers.[5]

Some programming is organised into programme blocks of similar programmes. The late night Comedy Club segment broadcasts "two hours of contemporary comedy" most nights of the week and is primarily hosted by Arthur Smith. A long-standing segment that remained following the change from Radio 7, it was previously fronted by Alex Riley and Phil Williams. Comedy previously available as CDs on the Laughing Stock label is also broadcast.

Drama is also broadcast, notably in The 7th Dimension evening segment. A long running segment continued from Radio 7, the block airs speculative fiction, science fiction, fantasy and horror stories presented by Nicholas Briggs. The segment contains programmes including Doctor Who audio dramas starring Paul McGann as the Eighth Doctor, as well as programmes imported from overseas including American broadcasts The Twilight Zone and Garrison Keillor's Radio Show as well as Stuart McLean's Vinyl Cafe from Canada. However, The 7th Dimension has been recently controversially scrapped on weekday evenings, and with increasing additions of repeats of old Radio 4 documentaries, interviews and "educational/cultural" programmes concern is growing that the station's original mandate to provide comedy, drama and entertainment is being increasingly sidelined, turning Radio 4 Extra into what some are already starting to refer to as "Radio Bore(4)", Mk 2.

Much of the channels schedule is formed of repeats from classic comedy and drama. The schedule spans the The Goon Show (1950s) and Round the Horne (1960s), through Radio 2 favourites like The News Huddlines, Castle's On The Air and Listen to Les to recent Radio 4 shows such as Little Britain and Dead Ringers. Some of this content is newly discovered, such as copies of the version of Dick Barton Special Agent that were made for international distribution and early episodes of The Goon Show.

The station has broadcast original programmes. Newsjack is a topical news sketch show in the spirit of Radio 4s Week Ending which encourages contributions from listeners. Spanking New on Seven was stand-up comedy, and the BBC New Comedy Competition a competition for new comedians. Those who went on to have their own series on Radio 7 include John-Luke Roberts with Spats and Miriam Elia with A Series of Psychotic Episodes.

The Mitch Benn Music Show featured comedy songs introduced by Mitch Benn. The Colin and Fergus' Digi Radio comedy sketch show ran for two series in 2005–2006. Serious About Comedy was a weekly show presented by Robin Ince in which comedians and comedy critics discussed comedy television, radio, DVDs, and films. Tilt was a satirical look at the week's news of views other than the norm. Knocker was a sitcom about a market researcher, written by and starring Neil Edmond.

While most shows on Radio 7 were repeats, original programmes included:

Original programmes made for Radio 4 Extra.