BBC Radio Jersey (Jèrriais:BBC Radio Jèrri) is the BBC Local Radio service for Jersey, Channel Islands. It broadcasts from Saint Helier on 88.8 FM, 1026 AM and online.[2]

Like other BBC enterprises in Jersey, funding comes primarily from television licence fees collected in Jersey.[3] 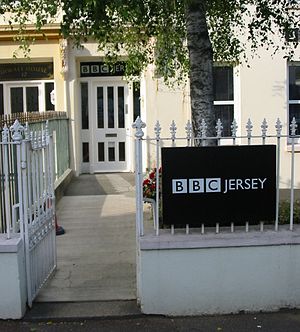 The station first aired on 15 March 1982, when it was opened by George Howard, the then chairman of the BBC. It launched from Broadcasting House, just off Rouge Bouillon in St Helier, and moved to its present premises in Parade Road in March 1994.

On Sunday afternoons, the station airs a weekly tri-lingual news review programme, Voices, in the Jèrriais, Portuguese and Polish languages.