BBC Scotland (Scottish Gaelic: BBC Alba) is the division of the British Broadcasting Corporation, the publicly funded broadcaster of the United Kingdom, which is responsible for broadcasting in Scotland. BBC Scotland employs approximately 1,250 staff to produce 15,000 hours of programming for television and radio in both Scotland and the rest of the UK.[1]

BBC Scotland broadcasts three television services to Scottish audiences. BBC One Scotland and BBC Two Scotland are separate channels able to opt out of the network feed of BBC One and Two to broadcast their own schedule of regional programming in addition to networked productions. The latter of these services adheres to network scheduling more frequently than the former, as the majority of regional programming is broadcast on BBC One Scotland. The flagship news programme Reporting Scotland is presented by Jackie Bird and Sally Magnusson.

In addition to these two channels BBC Scotland also operates the digital channel BBC Alba, broadcasting programming in Gaelic for up to seven hours a day. The channel is a joint partnership between BBC Scotland and MG Alba and is available across the UK on satellite services. Prior to digital switchover, some Gaelic programming was carried on BBC Two Scotland, however this ceased following the switchover.

In addition to this, some British radio programmes are replaced with local variants. The most prominent example is a regional opt out of BBC Radio 1, in which a Scottish programme using the BBC Introducing brand replaces a British wide programme - the aim of both programmes is to find new talent, the opt out features Scottish talent.[3]

BBC Scotland operates a mini site on BBC Online consisting of a portal to Scottish news, sport, programmes and items of cultural interest through BBC Online. The department also provides content from Scotland on these subjects to the website and for the BBC Red Button interactive TV service.

BBC Scotland previously offered a podcast download of the top news items of the week[4] and the online streaming of several key sections of output. However following the widespread introduction of the BBC iPlayer service, which allowed the streaming and download of nearly all BBC programmes including news, these services were discontinued as defunct.

The first radio service in Scotland was launched by the British Broadcasting Company on 6 March 1923.[5] Named 5SC and located in Glasgow, the services gradually expanded to include the new stations 2BD, 2DE and 2EH, based at Aberdeen, Dundee and Edinburgh respectively.[5] Around 1927, the new Corporation, as the BBC now was, decided to combine these local stations into regions under the generic banner of the BBC Regional Programme. When this was merged to form the BBC Home Service in 1939, national opt outs remained on the station and its successor BBC Radio 4 until the full separation of this opt out to become BBC Radio Scotland in November 1978.

Television in Scotland began on 14 March 1952 using the 405-line television system broadcast from the Kirk o'Shotts transmitter.[5] Television upgraded to colour in 1967 with regular national colour broadcasts starting from 1971 when BBC Scotland's studios were upgraded.[5]

BBC Scotland has increased the number of network programmes shown on the network services, timed in part with the move of BBC Scotland's headquarters to BBC Pacific Quay. 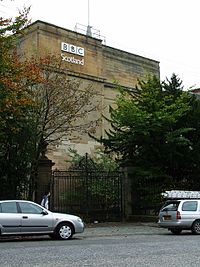 BBC Scotland's headquarters are currently located at BBC Pacific Quay on the banks of the River Clyde in Glasgow.[5][6] The studio centre was constructed between 2004 and 2006 and was opened in 2007.[7] Designed by David Chipperfield[6] and reportedly costing £188 million,[7][8] the studio contains three television studios and five radio studios as well as the first HD newsroom used by the BBC.[9] 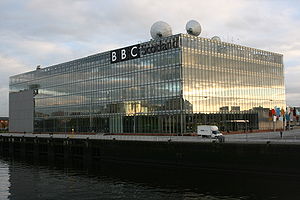 Upon the launch of the BBC in Scotland in 1923, the service originally occupied Rex House at 202 Bath Street, Glasgow, before moving to properties in Blythswood Square and subsequently in West George Street.[5] In 1929, the decision was made to move the headquarters operation to Queen Street, Edinburgh, where the Edinburgh station had been based since 1924[5][10] following a move from the original 79 George Street premises.[5] However, in 1935 the headquarters operation moved back to Glasgow as it accompanied the Glasgow station at North Park House, Queen Margaret Drive, Glasgow, near to the Glasgow Botanic Gardens.[5][11] BBC Scotland remained based at these premises until the move to Pacific Quay in 2007.[11] The Edinburgh operation remained on Queen Street until the move to The Tun in April 2002.[5][10] The Tun building is near to the Scottish Parliament building and contains television and radio studios in addition to a newsroom.

In addition to the Glasgow and Edinburgh bases of the broadcaster, BBC Scotland also has offices and studios located in Aberdeen, Dundee, Portree, Stornoway, Inverness, Selkirk, Dumfries, Kirkwall and Lerwick. Of these, the latter two locations operate radio opt-outs from BBC Radio Scotland while the Aberdeen, Inverness, Selkirk and Dumfries newsrooms produce local radio bulletins for the North East, Highlands & Islands, Borders and South West respectively.

In addition to these premises, BBC Scotland operates a drama productions studio at Dumbarton on the site of a disused whisky distillery. It is the main Scottish drama facilities where programmes such as River City and Hope Springs are recorded.[12][13] Also, the BBC Scottish Symphony Orchestra is resident at Glasgow City Halls[14] having been based at Queen Margaret Drive until 2006.

As well as producing programming for Scotland, as the largest of the BBC's "Nations & Regions", BBC Scotland also produces television programming intended for the entire British network.

Flagship programmes for Scotland include the nightly news programmes Reporting Scotland and Newsnight Scotland, drama in the form of River City and Monarch of the Glen, and sports programming in the shape of Sportscene, Sport Monthly and The Adventure Show. BBC Scotland also produces Gaelic programming, such as Eòrpa and Dotaman, under the banner BBC Alba.

Eòrpa hit the headlines in May 2008, specially mentioned in the Scottish Broadcasting Commission's report. 'It was intriguing to note that without fail at every one of our public events BBC2 Scotland's Eòrpa programme was raised, unsolicited, and by non-Gaelic speakers, as an example of a positive, well-respected programme' - Blair Jenkins, Chair - Scottish Broadcasting Commission.[15]

BBC Scotland also produces the Scottish opt-out sections of British-wide programmes such as The Politics Show and Children in Need. Output for the British network has included such recent high profile dramas as Monarch of the Glen, Hope Springs and Single Father.[16]

Over the years BBC Scotland made a number of well known and much loved radio and television programmes both for the BBC networks and for transmission in Scotland only. In television these were known within the BBC as "opt out" programmes.

At teatime in the beginning there was A Quick Look Round with Leonard Maguire. Then, as well as the flagship evening news programme Reporting Scotland presented by Mary Marquis and Douglas Kynoch with contributions from Renton Laidlaw in Edinburgh and Donny B MacLeod in Aberdeen, there were popular current affairs series like Compass, Checkpoint with Esmond Wright and Magnus Magnusson, Person to Person with Mary Marquis, Current Account, Public Account and Agenda.

Alongside Sportscene there were opt out versions of Songs of Praise and the schools quiz Top of the Form and, of course, a raft of Scottish entertainment programmes from the White Heather Club through Para Handy to the annual Hogmanay shows.

Over the years many important television dramas came out of Scotland under the leadership of Pharic MacLaren - including Sunset Song and popular series such as Sutherland's Law with Iain Cuthbertson.

BBC Scotland started using their own continuity announcers for all evening and weekend afternoon junctions around 1977; before this period, announcers only covered opt-outs, which resulted in the London announcer being heard most of the time. From 1979, their duties were expanded to cover the lunchtime news bulletin at 12:40, just before the network Midday News at 12:45. There was one announcer who was never seen: Robert Logan, who was also a Conservative councillor. Consequently, he never read the news summaries, nor did he ever give his name at closedown. From 1985, the announcing team started doing a news summary just before children's programmes at around 15:53, and within a few weeks, additional news summaries at 21:25 were introduced. From 31 October 1988, newsroom staff started to read the news summaries instead of the announcers.

Inevitably, though, viewers started to spot their little idiosyncrasies. Mark Stephen often came perilously close to sending up programmes with his good-natured humour; links of his included: Peter Cushing stars in our late night horror film in 50 minutes. First on BBC One Scotland, Dougie Donnelly rises from the grave with today's football action in Sportscene.