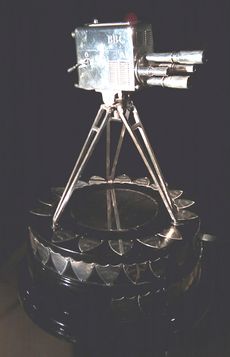 The trophy for the main award – a silver four-turret lens camera. 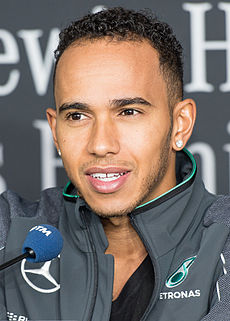 The BBC Sports Personality of the Year Award is the main award of the BBC Sports Personality of the Year ceremony, which takes place each December. The winner is the sportsperson, judged by a public vote, to have achieved the most that year. The recipient must either be British or reside and play a significant amount of their sport in the United Kingdom. The winner is selected by a public-vote from a pre-determined shortlist. The most recent award winner is tennis player Andy Murray, who won in 2015.

Sports Personality of the Year was created by Paul Fox, who thought of the idea while he was editor of the magazine show Sportsview. The first award ceremony took place in 1954 as part of Sportsview, and was presented by Peter Dimmock.[1] For the first show, votes were sent by postcard, and rules presented in a Radio Times article stipulated that nominations were restricted to athletes who had featured on the Sportsview programme since April. Approximately 14,500 votes were cast, and Christopher Chataway beat Roger Bannister to win the inaugural BBC Sportsview's Personality of the Year Award.[2]

Four people have won the award more than once: boxer Henry Cooper, Formula One drivers Nigel Mansell and Damon Hill and tennis player Andy Murray have each won twice.[3] Snooker player Steve Davis has finished in the top three a record five times.[4] Jessica Ennis-Hill holds the record for most podiums without a win; Ennis-Hill has finished 4 times in the top three, but is yet to win.

Princess Anne (1971) and her daughter Zara Phillips (2006) are the only award-winners to be members of the same family. The oldest recipient of the award is Dai Rees, who won in 1957 aged 44. Ian Black, who won the following year, aged 17, is the youngest winner.[3] Torvill and Dean, who won in 1984, are the only non-individual winners of the award, so in the 61 years of the award there have been 62 recipients. Of these 13 have been female.[5] 17 sporting disciplines have been represented; athletics has the highest representation, with 17 recipients. Counting Torvill and Dean separately, there have been 49 English winners of the award, five Scottish,[6] four Welsh,[7] two Northern Irish,[8][9] and one Manx. Since the award ceremony began only on one occasion (2013) have none of the podium placers been English.

The shortlist is announced a few weeks before the award ceremony, and the winner is determined on the night by a public telephone and on-line vote. Prior to 2012, a panel of thirty sports journalists each submitted a list of ten contenders. From these contenders a shortlist of ten nominees was determined. This method was criticized following the selection of an all-male shortlist in 2011. The selection process for contenders was changed for the 2012 and subsequent awards by the introduction of an expert panel. The panel produces a shortlist that reflects UK sporting achievements on the national and/or international stage, represents the breadth and depth of UK sports and takes into account ‘impact’ within and beyond the sport or sporting achievement in question.

This table lists the total number of awards won by recipient's sporting profession.

By number of accolades

The below table lists all people who have finished in the top three places more than once.