BBC Cymru Wales (an amalgamation of the English: BBC Wales and the Welsh: BBC Cymru) is a division of the BBC, and the national broadcaster for Wales.[1] Established in 1964, BBC Cymru Wales is based in Cardiff and directly employs some 1,200 people to produce a range of programmes for television, radio and online services in both English and Welsh.[2] 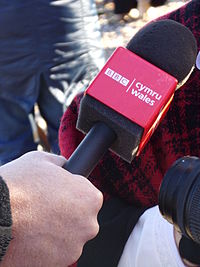 BBC Cymru Wales operates two television services, BBC One Wales and BBC Two Wales, which can opt out of the network feed of these two channels to broadcast additional regional programming as well. These two channels broadcast a variety of programmes in English, including the flagship news programme BBC Wales Today which broadcasts several bulletins throughout the day in addition to the main evening programme.

In addition to these two channels, BBC Cymru Wales is also required to provide programmes in Welsh, which it supplies to the Welsh channel S4C free of charge using the BBC Cymru brand.[4] These programmes include a Welsh news service Newyddion, covering international, UK and Welsh news, and a soap opera Pobol y Cwm, the longest running television soap opera made by the BBC.

BBC Cymru Wales operates its own mini-site on BBC Online as well as providing news and features for other areas of BBC Online. In addition, news stories are also provided for the BBC Red Button interactive service.

BBC Cymru Wales employs a full-time orchestra, the BBC National Orchestra of Wales, who give concerts in Cardiff, Swansea and across Wales. The majority of the orchestra's concerts are recorded for broadcast on BBC Radio 3, BBC Radio Wales and BBC Radio Cymru.

The first broadcast in Wales was on 13 February 1923[5] from the radio station 5WA, later to become part of the BBC Regional Programme and in 1939 the BBC Home Service. During this time, the region was served from a variety of bases around Wales. During World War II, the regional services all ceased and broadcast the Home Service from London, although some Welsh content was included.[5] The BBC's Bangor base played host to the BBC Variety Department during the war, although this fact was never officially announced.[5]

The first television signals in Wales came on 15 August 1952 from the newly constructed Wenvoe transmitter. The transmitter itself broadcast the national BBC Television service. Wales would gain some significance when, in 1957, the BBC West region from Bristol was established including a daily five-minute news bulletin for Wales, followed five years later by the launch of the daily magazine programme, Wales Today.[5] 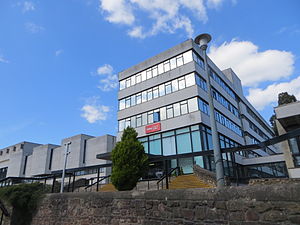 The launch of BBC Wales on 9 February 1964 provided a specific television service for the country. The new service was heavily promoted (proclaiming that Wales gets its very own TV service in 1964!) with animated promos using the sound of Welsh choirs to explain about interference from the mountains.[6] Two years later in 1966, BBC Cymru Wales' new headquarters at Broadcasting House in Cardiff opened and the first colour broadcast for Wales followed in 1970.[7]

Following the end of the Second World War, the BBC Home Service continued its regional opt-outs, including an opt-out service for Wales. This opt-out continued after the change from the Home Service to Radio 4 and paved the way for two full-time radio services - BBC Radio Cymru in 1977, followed a year later by BBC Radio Wales.[7]

Prior to 1982, BBC Cymru Wales on television provided programmes in both English and Welsh, with the news programme Heddiw and the long-running serial Pobol y Cwm figuring among the key output. However, this changed with the launch of S4C on 1 November 1982 as all Welsh-language programming on both the BBC and the ITV contractor HTV was transferred to the new channel. As part of a guaranteed ten hours a week of BBC-produced programming, Pobol y Cwm switched to the new channel while a newly expanded news service, Newyddion, was launched.

Into the late 1990s, BBC Cymru Wales continued to expand their services. The first web pages for Wales began to appear on BBC Online in 1997, including a variety of features surrounding programming, schedules, community events and other stories.[7][8] The following year, BBC Wales gained additional air time through the use of a late prime-time to midnight opt-out from new digital channel BBC Choice.[7] This lasted until opt-outs ended on the channel in 2001; subsequently BBC Wales opted out of the BBC Two prime-time schedule on digital platforms to broadcast BBC 2W.[7][9] This latter service closed on 2 January 2009 – prior to the digital switchover which would have ceased separate broadcasting on analogue and digital.[10]

Expansion in the number of drama productions handled by BBC Cymru Wales since 2011 has resulted in the construction and opening on a new studio centre in Cardiff.[11] 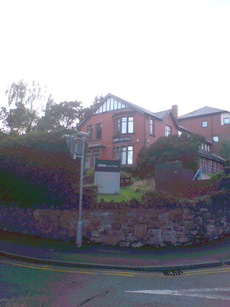 The current headquarters of BBC Cymru Wales is located within Broadcasting House, Llandaff, Cardiff.[7] The studio centre was built in 1966 and opened the following year as a purpose built location to house the expanding presence of the BBC in Cardiff.[7] The centre contained studios for the news programmes, radio space including that used by the BBC National Orchestra of Wales until 2009, and another studio for drama productions constructed in the mid-1970s.[12]

Previously, the BBC in Wales had been located in a converted chapel in Broadway, Cardiff and in temporary accommodation at BBC Broadcasting Centre on the banks of the River Taff.[5] While these studios played host to drama, entertainment and regional programmes, the site was still not ideal. The site only held two studios, both located in the church, and the ability to broadcast film was not installed on the site for several years; film played into programmes from a telecine machine in Bristol or London and film processing for news was carried out by a firm called Park Pictures in Cardiff until BBC processing was installed in Stacey Road. 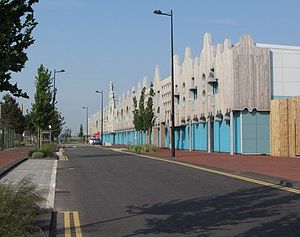 The expansion of BBC Cymru Wales' productions in recent years has resulted in investment for new studios. To gain extra capacity, BBC Wales invested into Upper Boat Studios in Pontypridd to house several productions, notable centred around Doctor Who and its sister productions Torchwood and The Sarah Jane Adventures. Despite the investment in Upper Boat, the studio complex soon became too small to house new productions being moved to the BBC Nations.[13] As part of this decision, it was decided in March 2009 that BBC productions Casualty and Crimewatch were to relocate from their former homes at BBC Bristol network production unit to Cardiff.[13]

To house these new programmes, a new 170,000 sq ft studio complex was built, designed to house the productions of Doctor Who, The Sarah Jane Adventures, Casualty, Upstairs Downstairs, and Pobol y Cwm. Located in Porth Teigr, Cardiff Bay, Roath Lock Studios gained permission in January 2009[14] and construction began in June 2010[15] with the building topping out in February 2011. Production began at the site in autumn 2011[14] and the site was officially opened on 12 March 2012.[16] As a result, Pobol y Cwm moved from the Llandaff studios and Doctor Who moved from Upper Boat studios to the new complex, with Casualty joining them at the site. Despite being designed to house them, the site never housed the Sarah Jane Adventures, following the death of main actress Elisabeth Sladen in 2011, or Upstairs Downstairs, following the series' cancellation.

It was announced in August 2013 that the Llandaff studios would close in the next few years and that the headquarters of BBC Cymru Wales would subsequently move to a new site.[17] In June 2014 it was announced that the new headquarters would be on the site of Cardiff Central bus station and will house 1000 staff and will have around half the floor space of the Llandaff base with 70% less studio space, as a result of the opening of Roath Lock.[18]

In addition to these properties, BBC Cymru Wales also has properties in Aberystwyth, Bangor, Carmarthen, Newtown, Penrhyndeudraeth, Swansea and Wrexham and at BBC Hoddinott Hall in Cardiff, home to the BBC National Orchestra of Wales. 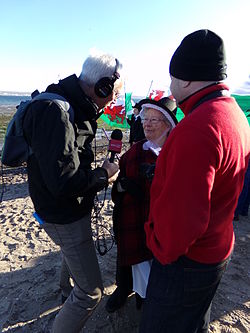 BBC Cymru Wales produces local and networked programming for broadcast in Wales and the rest of the UK. In recent years, its drama output has been particularly successful, including the 2005 revival of the classic science-fiction series Doctor Who and its spin-offs Torchwood (2006) and The Sarah Jane Adventures (2007). In addition, BBC Wales commissions other drama output for the BBC network from independent producers, such as Life on Mars (2006–07).

The following productions were created by BBC Cymru Wales for broadcast in Wales:

In addition to programming for Wales, networked productions from BBC Cymru Wales include:

In addition to the in-house commissions, BBC Wales also commissions other independent companies to produce programmes. These include:
For Wales: