From Infogalactic: the planetary knowledge core
Jump to: navigation, search
This page is about the sport. For the related bike model, see BMX bike. For other uses, see BMX (disambiguation). 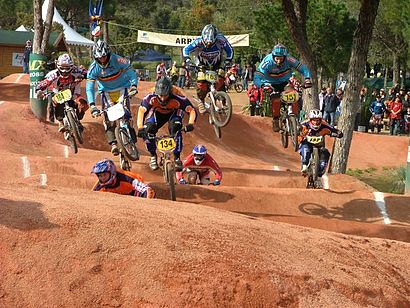 A BMX race. First round of the 2005 European BMX Championships held in Sainte Maxime, France on 23 April 2005

BMX, an abbreviation for bicycle motocross, is a cycle sport performed on BMX bikes, either in competitive BMX racing or freestyle BMX, or else in general on- or off-road recreation. BMX began when young cyclists appropriated motocross tracks for fun, racing and stunts, eventually evolving specialized BMX bikes and competitions.

BMX began in the early 1970s when children began racing their bicycles on dirt tracks in southern California, inspired by the motocross stars of the time. The size and availability of the Schwinn Sting-Ray and other wheelie bikes made them the natural bike of choice for these races, since they were easily customized for better handling and performance. BMX racing was a phenomenon by the mid-1970s. Children were racing standard road bikes off-road, around purpose-built tracks in California.[1] The 1972 motorcycle racing documentary On Any Sunday is generally credited with inspiring the movement nationally in the United States; its opening scene shows kids riding their Sting-Rays off-road. By the middle of that decade the sport achieved critical mass, and manufacturers began creating bicycles designed especially for the sport.

George E. Esser founded the National Bicycle League as a non-profit bicycle motocross sanctioning organization in 1974. Before they set up the NBL, Esser and his wife, Mary, sanctioned motorcycle races with the American Motocross Association (AMA). Their two sons, Greg and Brian, raced motorcycles, but also enjoyed riding and racing BMX with their friends. It was their sons’ interest, and the lack of BMX organizations in the East, which prompted Esser to start the NBL in Florida.

By 1977, the American Bicycle Association (ABA) was organized as a national sanctioning body for the growing sport. In April 1981, the International BMX Federation was founded, and the first world championships were held in 1982. Since January 1993 BMX has been integrated into the Union Cycliste Internationale.[2]

Freestyle BMX is now one of the staple events at the annual Summer X Games Extreme Sports competition and the Etnies Backyard Jam, held primarily on the East and West coasts of the United States. The popularity of the sport has increased due to its relative ease and availability of places to ride and do tricks.

In 2003, the International Olympic Committee made BMX a full medal Olympic sport for 2008 Summer Olympic Games in Beijing, China, and Māris Štrombergs (male, for Latvia) and Anne-Caroline Chausson (female, for France) became the first Olympic champions.[3][4]