From Infogalactic: the planetary knowledge core
Jump to: navigation, search
For other uses, see Backscatter (disambiguation). 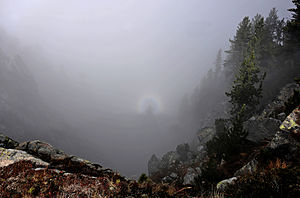 In physics, backscatter (or backscattering) is the reflection of waves, particles, or signals back to the direction from which they came. It is a diffuse reflection due to scattering, as opposed to specular reflection like a mirror. Backscattering has important applications in astronomy, photography and medical ultrasonography.

Backscatter of waves in physical space

Backscattering can occur in quite different physical situations, where the incoming waves or particles are deflected from their original direction by different mechanisms:

Sometimes, the scattering is more or less isotropic, i. e. the incoming particles are scattered randomly in various directions, with no particular preference for backward scattering. In these cases, the term "backscattering" just designates the detector location chosen for some practical reasons:

In other cases, the scattering intensity is enhanced in backward direction. This can have different reasons:

Backscattering properties of a target are wavelength dependent and can also be polarization dependent. Sensor systems using multiple wavelengths or polarizations can thus be used to infer additional information about target properties.

Backscattering is the principle behind radar systems.

In weather radar, backscattering is proportional to the 6th power of the diameter of the target multiplied by its inherent reflective properties, provided the wavelength is larger than the particle diameter (Rayleigh scattering). Water is almost 4 times more reflective than ice but droplets are much smaller than snow flakes or hail stones. So the backscattering is dependent on a mix of these two factors. The strongest backscatter comes from hail and large graupel (solid ice) due to their sizes, but non-Rayleigh (Mie scattering) effects can confuse interpretation. Another strong return is from melting snow or wet sleet, as they combine size and water reflectivity. They often show up as much higher rates of precipitation than actually occurring in what is called a brightband. Rain is a moderate backscatter, being stronger with large drops (such as from a thunderstorm) and much weaker with small droplets (such as mist or drizzle). Snow has rather weak backscatter. Dual polarization weather radars measure backscatter at horizontal and vertical polarizations to infer shape information from the ratio of the vertical and horizontal signals.

The backscattering method is also employed in fiber optics applications to detect optical faults. Light propagating through a fiber optic cable gradually attenuates due to Rayleigh scattering. Faults are thus detected by monitoring the variation of part of the Rayleigh backscattered light. Since the backscattered light attenuates exponentially as it travels along the optical fiber cable, the attenuation characteristic is represented in a logarithmic scale graph. If the slope of the graph is steep, then power loss is high. If the slope is gentle, then optical fiber has a satisfactory loss characteristic.

The loss measurement by the backscattering method allows measurement of a fiber optic cable at one end without cutting the optical fiber hence it can be conveniently used for the construction and maintenance of optical fibers.

The term backscatter in photography refers to light from a flash or strobe reflecting back from particles in the lens's field of view causing specks of light to appear in the photo. This gives rise to what are sometimes referred to as orb artifacts. Photographic backscatter can result from snowflakes, rain or mist, or airborne dust. Due to the size limitations of the modern compact and ultra-compact cameras, especially digital cameras, the distance between the lens and the built-in flash has decreased, thereby decreasing the angle of light reflection to the lens and increasing the likelihood of light reflection off normally sub-visible particles. Hence, the orb artifact is commonplace with small digital or film camera photographs[1]