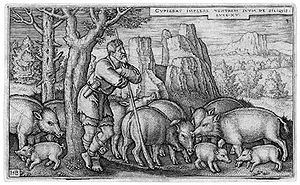 Engraving of the Prodigal Son as a swineherd by Hans Sebald Beham, 1538.
This article is about the theological phenomenon. For the dance, see Moonwalk (dance).

Backsliding, also known as falling away,[1] is a term used within Christianity to describe a process by which an individual who has converted to Christianity reverts to pre-conversion habits and/or lapses or falls into sin, when a person turns from God to pursue their own desire.[2] In Christianity, within denominations which teach Arminianism, such as the Methodist Church and Pentecostal Holiness Church, as well as in the Roman Catholic Church, backsliding is a state in which any free willed believer is capable of adopting. This belief is rejected by Calvinists endorsing the perseverance of the saints doctrine.[3][4] In these denominations, it is taught that the backslidden individual is in danger of eventually going to Hell if he does not repent (see Conditional security).[3][5] Historically, backsliding was considered a trait of the Biblical Israel which would turn from the Abrahamic God to follow idols.[6] In the New Testament church (see Acts of the Apostles and Christianity in the 1st century), the story of the Prodigal Son has become a representation of a backslider that repented.[7][8]