For the backstay of a boot (footwear), see Boot#Parts of a boot.

A backstay is a piece of standing rigging on a sailing vessel that runs from the mast to either its transom or rear quarter, counteracting the forestay and jib. It is an important sail trim control and has a direct effect on the shape of the mainsail and the headsail. Backstays are generally adjusted by block and tackle, hydraulic adjusters, or lines leading to winches. 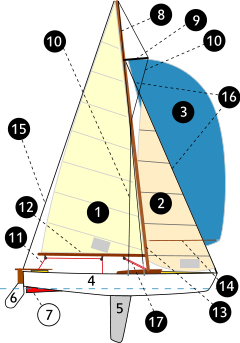 Sailboat diagram. The backstay is identified by the number 15.

If the running backstays leads to the mast where the forestay attaches, the effect of tensioning them will reduce sag in the headsail and second,increase mast bend and flatten the mainsail as a result. Both effects are desirable as the wind increases.

On modern oceangoing yachts, the backstay is also commonly used as an antenna for Marine SSB radios and/or an amateur radio, accomplished by placing structural backstay insulators at either end of the backstay.[citation needed]