From Infogalactic: the planetary knowledge core
Jump to: navigation, search
This article is about the Pittsburgh–West Virginia rivalry. For the rivalry in Mississippi, see Millsaps–Mississippi College rivalry.

The Backyard Brawl is an American college football rivalry between the University of Pittsburgh Panthers and West Virginia University Mountaineers. The term "Backyard Brawl" has also been used to refer to college basketball games played annually or semi-annually and may also be used to refer to other athletic competitions between the two schools. It is a registered trademark for both universities,[1] and refers to the close proximity of the two universities, separated by 75 miles (105 km) along Interstate 79.

The football rivalry is the 14th oldest in the United States and is typically shown on national television. In the past, the Backyard Brawl has been seen on ABC, CBS, ESPN, and ESPN2. Through the 104 games played between these two schools, Pitt leads the series 61–40–3. On Saturday, December 1, 2007 the 100th edition of the Backyard Brawl took place at Mountaineer Field in Morgantown, West Virginia. The 4–7 Panthers upset the 2nd–ranked Mountaineers 13–9, knocking West Virginia out of the BCS National Championship Game. The game was one of the most important Backyard Brawls, one of the biggest upsets for the Pittsburgh Panthers, one of the biggest upsets of the season, and was voted as the "Game of the Year" by ESPNU.[2] The Mountaineers got revenge when the series returned to Morgantown in 2009, upsetting the No. 8 Panthers 19–16 on a game-ending field goal. The 2009 Backyard Brawl was the most watched game in the history of ESPN2.

The football series was first played in 1895, and the game has historically been one of the more intense rivalries in the eastern United States. The rivalry between the two schools is due mainly to proximity. WVU's campus in Morgantown, West Virginia is only about 70 miles south of Pittsburgh (via Interstate 79), and the two schools often compete for the same recruits.

The 1921 edition of the Backyard Brawl was the first college football game broadcast on the radio when Harold W. Arlin announced the 21–13 Pittsburgh victory on KDKA.[3]

From 1962–2011, the series alternated between Pittsburgh and Morgantown on a yearly basis. Before that, the games were held in Pittsburgh on an almost regular basis, with Morgantown occasionally hosting the game. At one point, Pittsburgh hosted the game 11 years in a row (1919–29) and also hosted eight straight contests between 1938–48. (There were no matchups from 1940–42.) In contrast, the most consecutive games West Virginia has hosted were four in a row from 1895–1901, with one of those games held in Fairmont, West Virginia, now the home to Fairmont State University, and one in Wheeling, West Virginia. The most consecutive games played in Morgantown, three, were held from 1932–34.

The Mountaineers and the Panthers wore Nike Pro Combat System of Dress, uniforms designed to pay respect to Pittsburgh's steel industry and West Virginia's coal mining industry, for the 2010 Backyard Brawl. According to the Pittsburgh Tribune Review, West Virginia wore a shade of white "that looks as if it has a fine layer of dust on the jersey" and has accents in university gold that "references the canaries used long ago to test toxicity in mines." The helmet has a thin yellow line, designed to look like "the beam of light emitted by a miner's headlamp." Meanwhile, Pitt wore smoky college navy and black jerseys and pants with metallic team gold numerals "to represent the brilliant glow of a blast furnace," according to a Nike website, and matching helmets with a gold stripe and logo "evocative of steel I-beams" and resembling a hard hat.[4] West Virginia won the game in Pittsburgh 35–10.

In 2011, the rivalry took on a new look with the high powered offenses of Todd Graham and Dana Holgorsen coming to Pittsburgh and West Virginia, respectively. Holgorsen, formerly the offensive coordinator at Oklahoma State, and Graham, formerly the head coach for the Tulsa Golden Hurricane, had offenses ranked 6th and 8th, respectively, in the nation in the 2010 season.[5] West Virginia defeated Pittsburgh 21–20, in what turned out to be Graham's only Backyard Brawl due to his departure for Arizona State University in the offseason. For the 2012 season, West Virginia moved to the Big 12 Conference while Pitt will move to the Atlantic Coast Conference in 2013.[6] The 2012 season was the first time the two teams did not meet since 1942.

Beginning in 2014, the Russell Athletic Bowl in Orlando, Florida will match an ACC team and a Big 12 team. Thus, it will be possible for the teams to meet in that bowl, or also in a bowl that is part of the College Football Playoff.[7]

On July 3, 2013, the Bluefield (WV) Daily Telegraph reported that WVU athletic director Oliver Luck commented on possibly reviving the Backyard Brawl: "We've talked to Pitt, but they've got a lot going on, because they're trying to get Penn State back on their schedule...they're trying to figure out when they can squeeze us in. Their AD and I just talked last week, so we're trying to get that set up. It's all about dates. I think it will get done, but it's all a matter of when."[8] On June 18, 2014, ESPN quoted Luck: "At some point we’ll get Pitt back on the schedule, What I’m trying to do with our non-conference games is stay as regional as possible and rekindle some of our historical rivalries...I see [Pitt athletic director] Steve Pederson every now and then at various conventions. And we’ve had some discussions about that. We just haven’t been able to really eyeball the proper time to get it going again."[9] However, the Pittsburgh Post-Gazette reported in May 2014: "Pederson said he has not had any substantive discussions with Mountaineers athletic director Oliver Luck about reviving the Backyard Brawl."[10] In September 2015 it was confirmed the two had agreed to a four-game series running from 2022–25.[11][12]

The 1908 edition of the Backyard Brawl at Exposition Park

The location of the Backyard Brawl has varied much throughout its history. The very first football game took place in Wheeling, West Virginia in 1895. The next meeting, in 1898, was held in Fairmont, a short distance south of Morgantown. The third and fourth contests were held in Morgantown. The year 1902 marked the first time the game was held in Pittsburgh, at Exposition Park, the North Shore home of the Pittsburgh Pirates. 1910 was the first time the Backyard Brawl was held on the Pittsburgh campus, at brand-new Forbes Field. The series was held here for eight of the next nine years, until the opening of Pitt Stadium in 1925 on the opposite end of the University of Pittsburgh campus. Pitt Stadium hosted 5 straight games, until in 1930, the Backyard Brawl found itself at yet another new location, Mountaineer Field, which had opened in 1924 on the campus of West Virginia University. Another change in location occurred in 1981, when the game was played at a new Mountaineer Field in Morgantown. In 1998 and 2000, the game was played at Three Rivers Stadium. The most recent change took place in 2002, when the Backyard Brawl was played for the first time at Heinz Field, the new, full-time home of the Panthers, a year after it was opened.

The 1982 edition of the Backyard Brawl 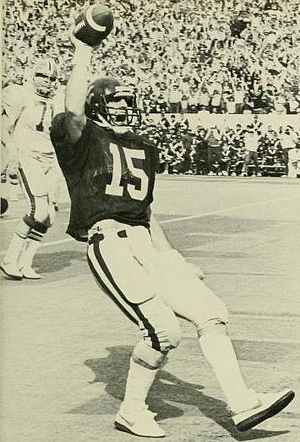 The basketball rivalry between the two schools began on February 17, 1905. The teams began competing annually since 1918, and have played each other at least once every season since then.[14] Pitt began playing basketball in the Big East Conference in 1982–83, with the Mountaineers joining in 1995–96. The basketball rivalry has heated up over the last several years as each team has been among the best in the country and the games have taken on added significance. On February 9, 2006, for the first time in the history of the series, in the 169th edition, Pitt and WVU were both nationally ranked as they squared off in Pitt's Petersen Events Center. Pitt won, but a few weeks later, the two ranked teams played at WVU Coliseum with the Mountaineers winning. In the 2008–09 season, the Panthers swept both games during the regular season and came into the tournament ranked No. 2, but were upset by the Mountaineers in the quarterfinals of the Big East Tournament.

During a February 2010 game when Pittsburgh visited West Virginia, several times during the course of the game, West Virginia fans threw objects at the Pittsburgh team. A Pittsburgh assistant coach was injured when an object was thrown at him. The actions received widespread attention. During the second half of the game, coach Bob Huggins used a microphone to address the fans. West Virginia University President Jim Clements issued an apology to the University of Pittsburgh community. Additionally, West Virginia vowed to address security, as the incident closing followed similar occurrences in games against Syracuse and Ohio State.[15][16][17] This game was followed with a rematch nine days later in Pittsburgh, and while there were no off-court incidents,[18] the game proved to be one of the most memorable in the history of the series as the 25th ranked Panthers upset the fourth ranked Mountaineers 98–95 in the first triple overtime basketball game to be played between the two schools.[19][20]

The 2011–12 season marked the end of the Brawl within Big East conference play. Pitt and WVU traded road wins, with Pitt winning in Morgantown 72–66, and WVU winning at the Petersen Events Center for only the second time ever 66–48. The future of the rivalry is in question as WVU began playing in the Big 12 in 2012, while Pitt moved to the ACC in 2013. 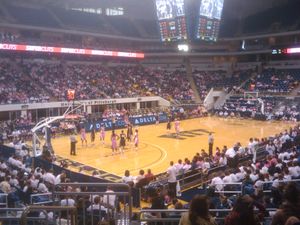 The 2011 women's Backyard Brawl in Pittsburgh.