Bacon's Rebellion was an armed rebellion in 1676 by Virginia settlers led by Nathaniel Bacon against the rule of Governor William Berkeley. The colony's dismissive policy as it related to the political challenges of its western frontier, along with other challenges including leaving Bacon out of his inner circle, refusing to allow Bacon to be a part of his fur trade with the Native Americans, and Doeg tribe Indian attacks, helped to motivate a popular uprising against Berkeley, who had failed to address the demands of the colonists regarding their safety.

About a thousand Virginians of all classes and races rose up in arms against Berkeley, attacking Native Americans, chasing Berkeley from Jamestown, Virginia, and ultimately torching the capital. The rebellion was first suppressed by a few armed merchant ships from London whose captains sided with Berkeley and the loyalists.[2] Government forces from England arrived soon after and spent several years defeating pockets of resistance and reforming the colonial government to one more directly under royal control.[3]

It was the first rebellion in the American colonies in which discontented frontiersmen took part; a similar uprising in Maryland took place later that year. The alliance between indentured servants (slaves for 5 to 7 years, if they survived) mostly Caucasians and Africans (most enslaved until death or freed), united by their bond-servitude, disturbed the ruling class, who responded by hardening the racial caste of slavery in an attempt to divide the two races from subsequent united uprisings with the passage of the Virginia Slave Codes of 1705[4][5][6] While the farmers did not succeed in their initial goal of driving Native Americans from Virginia, the rebellion did result in Berkeley being recalled to England.

The immediate cause of the rebellion was Governor William Berkeley's recent refusal to retaliate for a series of Native American attacks on frontier settlements. In addition, many colonists wished to push westward to claim Indian frontier land, but they were denied by Gov. Berkeley.[4]

Modern historians have suggested it may in fact have been a power play by Bacon against Berkeley and his favoritism towards certain members of court. Bacon's financial backers included men of wealth from outside Berkeley's circle of influence.[4]

Historian Peter Thompson argues that Bacon's motivation was a personal vendetta between him and Berkeley. However, Bacon's followers used the rebellion as an effort to gain government recognition of the shared interests among all social classes of the colony in protecting the "commonalty" and advancing its welfare.[7]

When Sir William Berkeley refused to retaliate against the Native Americans, farmers gathered around at the report of a new raiding party. Nathaniel Bacon arrived with a quantity of brandy; after it was distributed, he was elected leader. Against Berkeley's orders, the group struck south until they came to the Occaneechi tribe. After getting the Occaneechi to attack the Susquehannock, Bacon and his men followed by killing most of the men, women, and children at the village. Upon their return, they discovered that Berkeley had called for new elections to the Burgesses in order to better facilitate the Native American problem.[8] 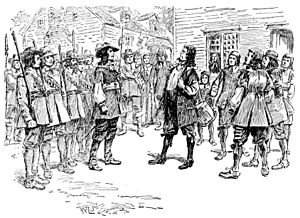 The recomposed House of Burgesses enacted a number of sweeping reforms. (Bacon was not serving his duty in the House; rather, he was at his plantation miles away.) It limited the powers of the governor and restored suffrage rights to landless freemen.[9]

After passage of these laws, Bacon arrived with 500 followers in Jamestown to demand a commission to lead militia against the Native Americans. The governor, however, refused to yield to the pressure. When Bacon had his men take aim at Berkeley, he responded by "baring his breast" to Bacon and told Bacon to shoot him. Seeing that the Governor would not be moved, Bacon then had his men take aim at the assembled burgesses, who quickly granted Bacon his commission. Bacon had earlier been promised a commission before he retired to his estate if he could only be on "good" behavior for two weeks. While Bacon was at Jamestown with his small army, eight colonists were killed on the frontier in Henrico County (where he marched from) due to a lack of manpower on the frontier.[10]

On July 30, 1676, Bacon and his army issued the "Declaration of the People of Virginia". The declaration criticized Berkeley's administration in detail. It accused him of levying unfair taxes, appointing friends to high positions, and failing to protect frontier settlers from Indian attack. 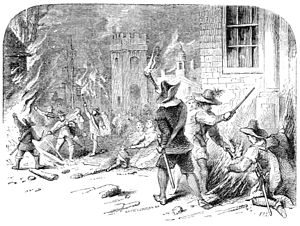 After months of conflict, Bacon's forces, numbering 300-500 men, moved to Jamestown. They burned the colonial capital to the ground on September 19, 1676. Outnumbered, Berkeley retreated across the river.[11]

Before an English naval squadron could arrive to aid Berkeley and his forces, Bacon died from dysentery on October 26, 1676.[12][13] John Ingram took over leadership of the rebellion, but many followers drifted away. The rebellion did not last long after that. Berkeley launched a series of successful amphibious attacks across the Chesapeake Bay and defeated the rebels. His forces defeated the small pockets of insurgents spread across the Tidewater. Thomas Grantham, a captain of a ship cruising the York River, used cunning and force to disarm the rebels. He tricked his way into the garrison of the rebellion, and promised to pardon everyone involved once they got back onto the ship. However, once they were safely ensconced in the hold, he trained the ship's guns on them, and disarmed the rebellion. Through various other tactics, the other rebel garrisons were likewise overcome.[14] 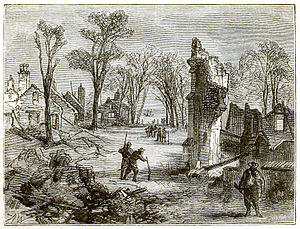 The 71-year-old governor Berkeley returned to the burned capital and a looted home at the end of January 1677.[15] His wife described Green Spring in a letter to her cousin:

"It looked like one of those the boys pull down at Shrovetide, and was almost as much to repair as if it had been new to build, and no sign that ever there had been a fence around it..."[16]

Bacon's wealthy landowning followers returned their loyalty to the Virginia Government after Bacon's death. Governor Berkeley returned to power. He seized the property of several rebels for the colony and executed 20 men by hanging,[17] including the former governor of the Albemarle Sound colony, William Drummond.[18]

After an investigative committee returned its report to King Charles II, Berkeley was relieved of the governorship, and recalled to England. "The fear of civil war among whites frightened Virginia’s ruling elite, who took steps to consolidate power and improve their image: for example, restoration of property qualifications for voting, reducing taxes and adoption of a more aggressive Indian policy."[4] Charles II was reported to have commented, "That old fool has put to death more people in that naked country than I did here for the murder of my father."[19] No record of the king's comments have been found; the origin of the story appears to have been colonial myth that arose at least 30 years after the events.[20]

Indentured servants both black and white joined the frontier rebellion. Seeing them united in a cause alarmed the ruling class. Historians believe the rebellion hastened the hardening of racial lines associated with slavery, as a way for planters and the colony to control some of the poor.[21]

Historiographers question whether the rebellion by Bacon against Berkeley in 1676 had any lasting contemporary significance for the more-successful revolution a century later. The most idolizing portrait of Nathaniel Bacon is found in Torchbearer of the Revolution by Thomas Jefferson Wertenbaker, "one of the worst books on Virginia that a reputable scholarly historian ever published."[22] The central area of debate in this era was Bacon's controversial character and complex disposition. Nothing better illustrates this than Wilcomb Washburn's The Governor and the Rebel. Rather than singing Bacon's praises and chastizing Berkeley's tyranny, Washburn found the roots of the rebellion in the colonists' intolerable demand to "authorize the slaughter and dispossession of the innocent as well as the guilty."[23]

More nuanced approaches on Berkeley's supposed tyranny or mismanagement entertained specialist historians throughout the middle of the century, leading to a diversification of factors responsible for Virginia's contemporary instability. Wesley Frank Craven in the 1968 publication The Colonies in Transition argues that his greatest failings took place during the revolt, near the end of his life.[24] Bernard Bailyn pushed the novel thesis that it was a question of access to resources, a failure to fully transplant Old World society to New.[25]

Edmund S. Morgan's classic 1975 American Slavery, American Freedom: The Ordeal of Colonial Virginia connected the calamity of Bacon's Rebellion, namely the potential for lower-class revolt, with the colony's transition over to slavery: “..But for those with eyes to see, there was an obvious lesson in the rebellion. Resentment of an alien race might be more powerful than resentment of an upper class. Virginians did not immediately grasp it. It would sink in as time went on.…” [26]

James Rice’s 2012 narrative Tales from a Revolution: Bacon’s Rebellion and the Transformation of Early America, whose emphasis on Bacon’s flaws echoes The Governor and the Rebel, integrates the rebellion into a larger story emphasizing the actions of multiple Native Americans, as well as placing it in the context of English politics; in this telling, the climax of Bacon's Rebellion comes with the Glorious Revolution of 1688/89.[27]