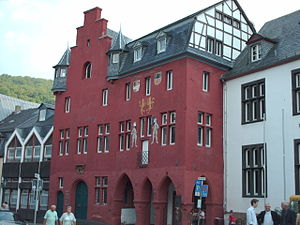 Bad Münstereifel is the seat of SIGNO innovation society Eifel Association, Association of the greatest inventors in Germany. Signo is a project of the Federal Ministry of Economics and Technology. Joined the Association is a youth and children's department, may acquire in the children and young people in a club's workshop, the basic knowledge of technology.[2]

Bad Münstereifel has four elementary schools in the central city as well as the districts Arloff, Mutscheid, and Houverath. A Hauptschule and Realschule share facilities, while the city has two Gymnasium: the public St. Michael Gymnasium and the diocesan-run St. Angela Gymnasium. Furthermore, the Apostolic school of the Legionaries of Christ has its seat in the city.

Since 1976, the city is also home to its own urban community college, with a specialty in law-related professions. There are also several private training facilities in the city, including the Kurt-Schumacher-Academy of the Friedrich-Ebert-Stiftung and the House of Labor Security of the Trade Association for Electrical and Precision Engineering.[3] There is also a house of the Youth Red Cross as an educational facility for the National Association (North Division).

Bad Münstereifel has a public library with a stock of 16,000 media.[4]

As of 2013[update] the folk-singer Heino has lived in the town.

Friedrich Joseph Haass, the "holy doctor of Moscow", was born in Bad Münstereifel in the 19th century.

The unofficial Nintendo fan convention, NCON, was held in the town's St. Angela Gymnasium in the early years of the 21st century.

The Portuguese Socialist Party, one of the two main Portuguese parties, was founded here in 1973 with the guidance of the Social Democratic Party of Germany, who wanted to create a political force which will be able to keep Portugal a member of the NATO.[5]

Bad Münstereifel is twinned with: