From Infogalactic: the planetary knowledge core
(Redirected from Baglama)
Jump to: navigation, search
For the instrument used in Greek music, see Baglamas.
File:Tamburasaz-Baglamasaz.jpg
Cura and bağlama

The bağlama (Turkish: bağlama, from bağlamak, "to tie", pronounced [baːɫaˈma]) is a stringed musical instrument shared by various cultures in the Eastern Mediterranean, Near East, and Central Asia regions.

It is sometimes referred to as the saz (from the Persian ساز‎, meaning a kit or set), it is also sometimes referred as the "cura", although the term "saz" actually refers to a family of plucked string instruments, long-necked lutes[1] used in Ottoman classical music, Turkish folk music, Iranian music, Azeri music, Kurdish music, Assyrian music, Armenian music, and in parts of Syria, Iraq and the Balkan countries. Instruments resembling today's bağlama have been found in archaeological excavations of Sumerian and Hittite mounds in Anatolia dating before Common Era, and in ancient Greek works.[2]

According to The New Grove Dictionary of Music and Musicians, "the terms 'bağlama' and 'saz' are used somewhat interchangeably in Turkey."[3] Like the Western lute and the Middle-Eastern oud, it has a deep round back, but a much longer neck. It can be played with a plectrum or with a fingerpicking style known as şelpe.

In the music of Greece the name baglamas (Greek: μπαγλαμάς) is given to a treble bouzouki, a related instrument. The Turkish settlement of Anatolia from the late eleventh century onward saw the introduction of a two-string Turkmen dutar, which was played in some areas of Turkey until recent times.

The most commonly used string folk instrument in Turkey, the bağlama has seven strings divided into courses of two, two and three. It can be tuned in various ways and takes different names according to region and size: Bağlama, Divan Sazı, Bozuk, Çöğür, Kopuz Irızva, Cura, Tambura, etc. The cura is the smallest member of the bağlama family: larger than the cura is the tambura, tuned an octave lower. The Divan sazı, the largest instrument in the family, is tuned one octave lower still.

A bağlama has three main parts, the bowl (called tekne), made from mulberry wood or juniper, beech, spruce or walnut, the spruce sounding board (göğüs) and a neck of beech or juniper (sap). The tuning pegs are known as burgu (literally screw). Frets are tied to the sap with fishing line, which allows them to be adjusted. The bağlama is usually played with a mızrap or tezene (similar to a guitar pick) made from cherrywood bark or plastic. In some regions, it is played with the fingers in a style known as Şelpe or Şerpe.

There are also electric bağlamas, which can be connected to an amplifier. These can have either single or double pickups.

The kopuz and the bağlama

The bağlama is a synthesis of historical musical instruments in Central Asia and pre-Turkish Anatolia. It is partly descended from the Turkic komuz. The kopuz, or komuz, differs from the bağlama in that it has a leather-covered body and two or three strings made of sheep gut, wolf gut, or horsehair. It is played with the fingers rather than a plectrum and has a fingerboard without frets. Bağlama literally translates as "something that is tied up", probably a reference to the tied-on frets of the instrument. The word bağlama is first used in 18th-century texts. The French traveler Jean Benjamin de Laborde, who visited Turkey during that century, recorded that "the bağlama or tambura is in form exactly like the cogur, but smaller." He was probably referring to the smallest of the bağlama family, the cura.

According to the historian Hammer, metal strings were first used on a type of komuz with a long fingerboard known as the kolca kopuz in 15th-century Anatolia. This was the first step in the emergence of the çöğür (cogur), a transitional instrument between the komuz and the bağlama. According to 17th-century writer Evliya Çelebi, the cogur was first made in the city of Kütahya in western Turkey. To take the strain of the metal strings the leather body was replaced with wood, the fingerboard was lengthened and frets were introduced. Instead of five hair strings there were now twelve metal strings arranged in four groups of three. Today, the cogur is smaller than a medium-size bağlama.

There are three string groups, or courses, on the bağlama, with strings double or tripled. These string groups can be tuned in a variety of ways, known as düzen (literally, "order"). For the bağlama düzeni, the most common tuning, the courses are tuned from top downward, A-G-D. Some other düzens are Kara Düzen (C-G-D), Misket Düzeni (A-D-F#), Müstezat (A-D-F), Abdal Düzeni, and Rast Düzeni. 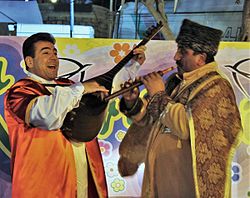 The musical scale of the bağlama differs from that of many western instruments - such as the guitar - in that, like many other non-western lute instruments, it is based on just intonation rather than equally tempered intervals.[4] This gives a truer harmony at the expense of the number of keys playable without retuning.

See also: Lute § History and evolution of the lute