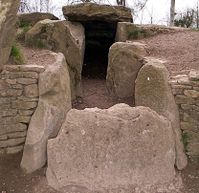 Waylands Smithy, where King Bagsecg was buried according to Berkshire tradition

Bagsecg (died 8 January 871) was a Viking leader referred to as a 'king. He is also known as Bægsecg or Bagsec.

In 870 or 871 he went from Scandinavia to England, and led The Great Summer Army there and added his forces to the Great Heathen Army which had already overrun much of England.

He and Halfdan Ragnarsson became the joint leaders of a Viking invasion of the Kingdom of Wessex. However, he was killed at the Battle of Ashdown, fighting a West Saxon Army led by King Ethelred and his younger brother, the future Alfred the Great.

Little is known about Bagsecg, He arrived in England in either 870 or 871 and was the leader of a massive Viking army known as The Great Summer Army which arrived in the summer, so the likely date when he arrived could be 870. As early as 871, he and Halfdan Ragnarsson dispatched a few Viking parties to attack the Kingdom of Wessex, which remained vulnerable to Viking raids; they captured Reading, Berkshire, and set up camp within the town. On 4 January 871, Alfred the Great (he was not yet king) attempted to attack the camp; however Bagsecg won a great victory at the Battle of Reading inflicting terrible losses on Alfred's army.

On 8 January 871, both forces met on the North Wessex Downs in Berkshire. The Vikings were commanded by Bagsecg and Halfdan and five other Danish earls. The Viking army itself was outnumbered in comparison to the West Saxons led by Alfred. This battle would determine the fate of Wessex and its king. Alfred's elder brother King Æthelred of Wessex was busy praying in a church, and refused to fight until his other army arrived. This left Alfred in command, and the West Saxon and Viking armies met, the battle itself lasting all day. Bagsecg was killed along with his five earls. According to the Anglo-Saxon Chronicle, Bagsecg was slain by a sword while Halfdan fled from the battlefield with the rest of the army back to Reading. The Battle of Ashdown itself was a limited West Saxon victory.

However, on the downs above the village of Harwell there once stood a tree (or succession of trees) which is known to this day, in the village, as "Bags tree", perhaps an indication of the death site or burial site of Bagsecg. This tree no longer exists, but its position is still marked on Ordnance Survey maps of the area.