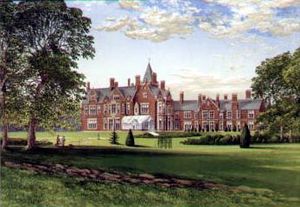 Bagshot Park is a royal residence located near Bagshot, a village 11 miles (18 km) south of Windsor and approximately 11 miles (18 km) north west of Guildford (Grid reference: SU 9164). Owned by the Crown Estate it is the current home of Prince Edward, Earl of Wessex and the Countess of Wessex. Bagshot Park is on Bagshot Heath, a fifty square-mile tract of formerly open land in Surrey and Berkshire. Bagshot Park occupies 21 hectares within the designated area of Windsor Great Park.[1] It is only a few miles from Sunninghill Park, the former residence of the Duke and Duchess of York.

In March 1998, the Mansion House at Bagshot Park, including a block of stables and Sunningdale Lodge, was leased by the Crown Estate to Prince Edward for 50 years. The Mansion House was renovated as a residence for the prince. The renovation was partly funded by the Crown Estate and partly by Prince Edward. The renovation was originally estimated to cost £2.18m, with £1.6m from the Crown Estate and the remainder being paid by the prince. The National Audit Office (NAO) report on the transaction states that the final cost of renovations was £2.98m; the Crown Estate paid £1.6m and the estimated excess of £1.38m was paid by Prince Edward. The Crown Estate had previously received £1.8 million from the Ministry of Defence in respect of dilapidations by the Royal Army Chaplains' Department[1] which offset the cost of the Crown Estate's share of the renovation costs. The prince rented it from the Crown Estate initially for £5,000 a year then after renovation rising to £90,000 a year subject to 15-year rent reviews linked to RPI. According to the NAO report, the property leased by the prince does not include commercial farmland or woodland. The lease agreement permits subletting of the stable block.[1] The prince is allowed to sell the lease or sub-lease the property after 8 years from the date of completion of the rectification works; the lease may not be assigned in the last 3 years of its life.[1] It appears that the prince used the premises as a base for his film production company, Ardent Productions, until he closed the business.[citation needed]

The original Bagshot Lodge (not the present Lodge, visible on the public road at the entrance to the drive) was built between 1631 and 1633[2] as one of a series of small lodges designed for King Charles I by Inigo Jones. It was remodelled between 1766 and 1772 according to designs of James Paine for George Keppel, the 3rd Earl of Albemarle,[3] and altered in 1798 by Sir John Soane[4] for the Duke of Clarence (later King William IV), who lived there until 1816.

Bagshot Park was subsequently used by Prince William Frederick, Duke of Gloucester, nephew of King George III. The Duke added pieces of property between the estate and Sunningdale; his widow, Princess Mary, daughter of King George III, continued to live there after his death until she moved out in 1847.[5] The original house was demolished in 1877-78.[6]

A new building with 120 rooms was completed in 1879. The 1881 census records an equerry and 26 servants living in the main house: an under butler, a housekeeper, four valets, two lady's maids, two dressers, a cook, three kitchen maids, three housemaids, three footmen, a page, a porter, a scullery maid, two other junior posts and a soldier. A coachman and seven grooms lived in the stables. Two other domestic staff lived in one of the lodges, three agricultural workers lived in another, and one gardener is recorded as living on the estate.[7] From 1880 this was the principal residence of Prince Arthur, Duke of Connaught and Strathearn, a son of Queen Victoria. The Duke, who was Governor General of Canada from 1911 until 1916, died at Bagshot Park in 1942.

The house was thereafter the regimental headquarters and depot of the Royal Army Chaplains' Department, who famously placed a notice by the pond reading "Please do not walk on the water". They vacated the building shortly before the Earl and Countess of Wessex took over the tenancy from the Crown. The original sign was removed when the chaplains left, but a new one, made by J.M.J. Holland Chairmakers and given to the Earl of Wessex, has replaced it.

Although the house was criticised by the architectural historian Professor Sir Nikolaus Pevsner for being ugly,[8] Bagshot Park was the most adventurous Royal house to be created since the death of Albert, the Prince Consort of Queen Victoria, in 1861. It is also a remarkable monument in the history of Indian taste in Britain: an Indian billiard room wing, which inspired the more famous Durbar Room at Osborne House, was prefabricated in India and installed in the 1880s. This was a result of the Duke of Connaught's Indian tour, when the Duke met John Lockwood Kipling and asked him to design and oversee the installation of a billiard room in Indian taste. The Indian craftsmen who assembled and installed the room at Bagshot were housed in a tent in the grounds.[9]