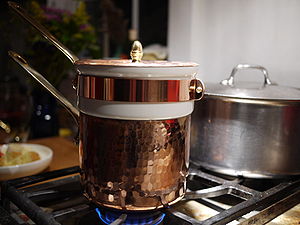 A bain-marie on a stovetop

A bain-marie (pronounced: [bɛ̃ maʁi]; also known as a water bath or double boiler), a type of heated bath, is a piece of equipment used in science, industry, and cooking to heat materials gently and gradually to fixed temperatures, or to keep materials warm over a period of time. 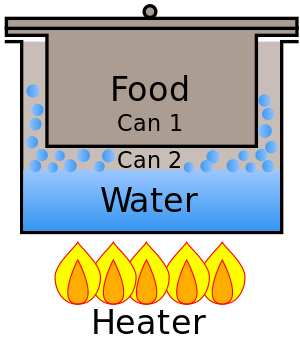 Schematic of an improvised double boiler, as used in outdoor cooking

The bain-marie comes in a wide variety of shapes, sizes, and types, but traditionally is a wide, cylindrical, usually metal container made of three or four basic parts: a handle, an outer (or lower) container that holds the working liquid, an inner (or upper), smaller container that fits inside the outer one and which holds the material to be heated or cooked, and sometimes a base underneath. Under the outer container of the bain-marie (or built into its base) is a heat source.

Typically the inner container is immersed about halfway into the working liquid.

When the working liquid is water and the bain-marie is used at sea level, the maximum temperature of the material in the lower container will not exceed 100 degrees Celsius (212 F), the boiling point of water at sea level. Using different working liquids (oils, salt solutions, etc.) in the lower container will result in different maximum temperatures.

A contemporary alternative to the traditional, liquid-filled bain-marie is the electric "dry-heat" bain-marie, heated by elements below both pots. The dry-heat form of electric bains-marie often consumes less energy, requires little cleaning, and can be heated more quickly than traditional versions. They can also operate at higher temperatures, and are often much less expensive than their traditional counterparts.[citation needed] 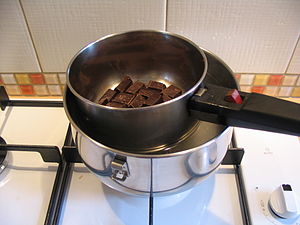 An improvised bain-marie being used to melt chocolate 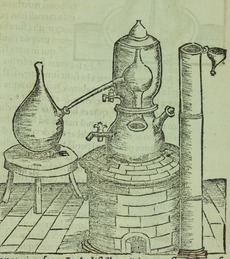 Bains-marie were originally developed for use in the practice of alchemy,[2][3] when alchemists needed a way to heat materials slowly and gently. In that early form of chemical science, it was believed by many that the best way to heat certain materials was to mimic the supposed natural processes, occurring in the Earth's core, by which precious metals were believed to be germinated.[citation needed]

The name comes from the medieval-Latin term balneum (or balineum) Mariae—literally, Mary's bath—from which the French bain de Marie, or bain-marie, is derived. There are many theories as to how the name Marie came to be associated with this equipment: