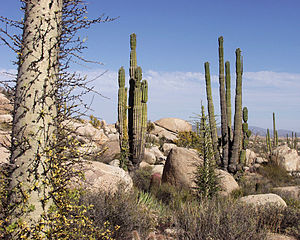 The ecoregion covers 77,700 square kilometers (30,000 square miles) and includes most of the Peninsula's western slope. It is bounded on the west by the Pacific Ocean and on the east by the Peninsular Ranges and is centered around the coordinates Lua error in Module:Coordinates at line 668: callParserFunction: function "#coordinates" was not found..[2] North of 30° north latitude, the Baja California desert transitions to the California chaparral and woodlands. The southern tip of the peninsula lies within the San Lucan xeric scrub ecoregion. To the north are the Sierra Juárez and San Pedro Mártir pine-oak forests, where a number of tree species are found including the near-threatened California Fan Palm.[3]

The climate is dry and subtropical. Although rainfall is low, the Pacific Ocean provides some humidity and moderates the temperature compared to the Sonoran desert, which lies on the east slope of the Peninsular Ranges.

The ecoregion is mostly covered by xeric shrubs, which create varying associations based on elevation and soil conditions. The ecoregion has close to 500 species of vascular plants, of which a number are endemic, for example the Boojum tree or Creeping Devil.