From Infogalactic: the planetary knowledge core
Jump to: navigation, search
This article is about the cooking profession. For other uses, see Baker (disambiguation). 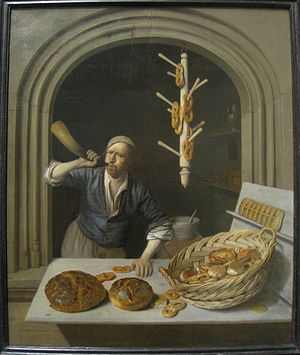 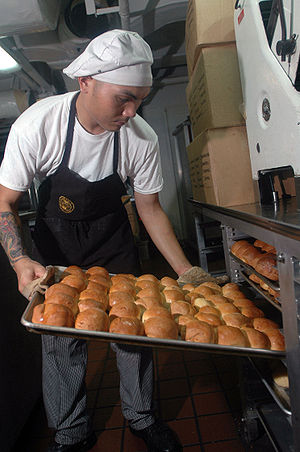 A military baker moves a tray of hot, freshly baked rolls onto a cooling rack on a ship, in this case an aircraft carrier

A baker is someone who makes, bakes and sells breads, rolls, biscuits or cookies, and/or crackers using an oven or other concentrated heat source. Cakes and similar foods may also be produced, as the traditional boundaries between what is produced by a baker as opposed to a pastry chef have blurred in recent decades. The place where a baker works is called a bakery.[1]

The first group of people to bake bread were ancient Egyptians, around 8000 BC. During the Middle Ages, it was common for each landlord to have a bakery, which was actually a public oven; housewives would bring dough that they had prepared to the baker, who would tend the oven and bake them into bread. As time went on, bakers would also sell their own goods, and in that some bakers acted dishonestly, tricks emerged: for example, a baker might have trap door(s) in the oven or other obscured areas, that would allow a hidden small boy or other apprentice to take off some of the dough brought in for baking. Then the dishonest baker would sell bread made with the stolen dough as their own. This practice and others eventually lead to the famous regulation known as Assize of Bread and Ale, which prescribed harsh penalties for bakers that were found cheating their clients or customers. As a safeguard against cheating, under-filled orders, or any appearance of impropriety, bakers commonly began to throw in one more loaf of bread; this tradition now exists in the phrase "baker's dozen", which is 13.

Today, bakers work in varying environments both as employees and sometimes owning their own stores. Bakers can be found working in: 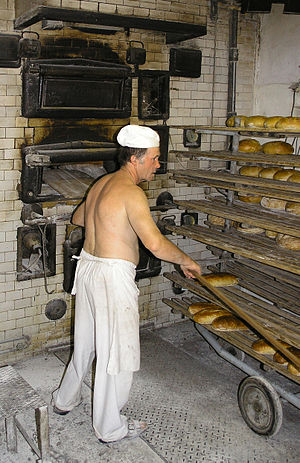 A traditional baker in Poland, removes fresh bread from an oven with a long wooden peel and places it on a cooling rack