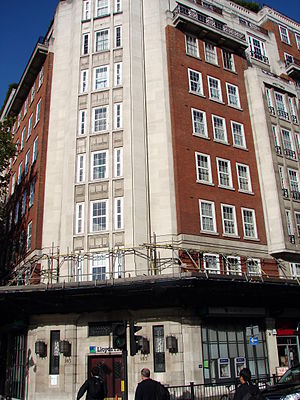 Scene of the Baker Street Robbery. The robbers entered from below the building

The Baker Street robbery was the burglary of the safe deposit boxes at the Baker Street, London branch of Lloyds Bank,[1][2] on the night of 11 September 1971.

The robbers had rented a leather goods shop named Le Sac, two doors north from the bank, and tunnelled a distance of approximately 50 feet (15 m) passing under the intervening Chicken Inn restaurant.[3] To avoid being overheard, they only dug during weekends. They initially used a thermal lance to try to break into the vault but ultimately had to use explosives.[3]

Robert Rowlands was a ham radio operator who lived in a fifth floor flat on Wimpole Street.[4] He overheard conversations between the robbers and their rooftop lookout at 11:15 pm.[4] He contacted local police, who did not take him seriously but suggested that he tape recorded the conversations while the robbery was in progress. There was however insufficient information to identify which bank was being robbed.

At 1 am, Rowlands contacted Scotland Yard, who immediately sent officers to his flat in Wimpole Street.

At 2 am, a senior police officer alerted radio detector vans to track down the gang's exact location. Police checked the 750 banks within 10 miles of Rowlands' receiver, including the Baker Street bank. At the time, the thieves were still in the vaults but the police failed to realise this because the security door was still locked. The thieves got away with £1.5m cash[5] (2010: £16.5m)[6] and valuables from over 260 safe deposit boxes. The total haul was believed to be near £3m (2010: £33.1m).[6]

The robbers left a cheeky message on a wall: 'Let's see how Sherlock Holmes solves this one'.

It has often been reported that after four days of news coverage British authorities issued a D-Notice, requesting that such reporting be discontinued for reasons of national security and the story disappeared from newspapers.[7][8] It is claimed by national newspapers in recent years, that some of the security boxes contained embarrassing or nationally sensitive material[3][9] and that the purpose of the request was to protect a prominent member of the British Royal Family.[3][10]

Rowlands, the aforementioned ham radio operator, claims that the police attempted to prevent him from talking to the press by means of the D-Notice, which he felt was an attempt to hide police incompetence.[11] He also claims that police threatened to prosecute him for listening to an unlicensed radio station.[11] An investigation some years later showed that a request had never been made to the D-Notice committee at that time.[12] Furthermore, a D-Notice has no legal status, being a mere request and not a legally enforceable order. The Times newspaper was still reporting about the case over two months later.[13]

Other recent reports suggest that the identity of the criminals and their sentences have never been revealed.[3] However, The Times (amongst other newspapers) reported in January 1973 that four men had been convicted of the robbery at a trial at the Old Bailey. Three of these men were named as: Anthony Gavin, 38, a photographer from Brownlow Road in Dalston; Thomas Gray Stephens, 35, a car dealer from Maygood Street in Islington; and Reginald Samuel Tucker, 37, a company director from Lee Street in Hackney, who all pleaded guilty and who each received twelve years imprisonment. The fourth man, Benjamin Wolfe, 66, a leather goods dealer from Dovercourt Road in East Dulwich, pleaded not guilty but was subsequently convicted and received eight years. Wolfe had signed the lease on the shop used by the robbers using his own name.[5][14]

Two other men accused of handling banknotes from the robbery were acquitted.[14] According to one press report, the police believed that the mastermind of the crime was another London car dealer who was never apprehended.[15] Thomas Stephens and Reg Tucker had sentences reduced to eight years on appeal.

A semi-fictional version of the robbery is the subject of the film The Bank Job (2008), which explores a popular theory of the crime that argues the robbery was either set up by, or later covered up by, MI5 to secure sexually compromising photographs of Princess Margaret, which were being kept in a deposit box at the bank by known radical Michael X. While this theory has usually been considered an urban myth, there have been some individuals, including George McIndoe, an advisor to the film, who claimed to have knowledge of the actual robbery,[16] purporting that this was indeed the real motivation for the robbery.