From Infogalactic: the planetary knowledge core
Jump to: navigation, search
This article is about the article of clothing. For other uses, see Baldrick (disambiguation). 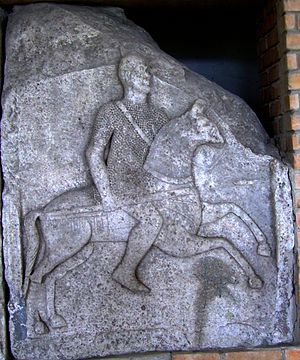 A cavalryman wearing a mail shirt with a baldric over his right shoulder.

A baldric (also baldrick, bawdrick, bauldrick as well as other rare or obsolete variations) is a belt worn over one shoulder that is typically used to carry a weapon (usually a sword) or other implement such as a bugle or drum.[1][2] The word may also refer to any belt in general, but this usage is poetic or archaic.

Baldrics have been used since ancient times, usually as part of military dress. The design offers more support for weight than a standard waist belt, without restricting movement of the arms, and while allowing easy access to the object carried. For example, the late 18th-century British Army's distinctive "Red coat" uniform pattern featured a pair of white baldrics crossed at the chest, with a soldier's bayonet sheath suspended from one and his canteen suspended from the other. Alternatively, and especially in modern times, the baldric may fill a ceremonial role rather than a practical one.

During ancient Roman times the balteus (plural baltei) was a type of baldric commonly used to suspend a sword. It was a belt generally worn over the shoulder, passing obliquely down to the side, typically made of leather, often ornamented with precious stones, metals or both.[3] There was also a similar belt worn by the Romans, particularly by soldiers, called a cintus (pl. cinti) that fastened around the waist. The word accintus meaning a soldier (literally, "girt" as for battle) attests to this differing usage.

Many non-military or paramilitary organisations include baldrics as part of ceremonial dress. The Knights of Columbus 4th Degree Colour Corps uses a baldric as part of their uniform;[4][5] it supports a ceremonial sword. 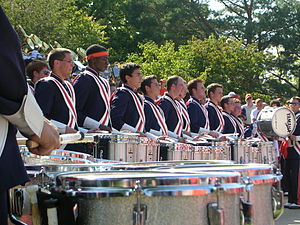 The University of Illinois Marching Illini wore two baldrics as a part of their uniform until 2009, with one over each shoulder. They crossed in the front and back and were buttoned onto the jacket beneath a cape and epaulets. Today, the current Marching Illini wears one baldric with two sides: ILLINI is on one side and the traditional orange and white baldric from the previous uniform.

A crossed pair of baldrics is often worn as part of uniform of Morris dance sides; different colours of baldric help to distinguish different sides.

In literature and culture

The baldric appears in the literary canon. Britomart, in Edmund Spenser's Faerie Queene, clothes herself in a borrowed armour "with brave bauldrick garnished" before embarking on her quest (Book III, canto iii). Benedick, from William Shakespeare's Much Ado About Nothing, says "But that I will have a recheat winded in my forehead or hang my bugle in an invisible baldric all women shall pardon me." A baldric features prominently in Chapter 4 of Alexandre Dumas's The Three Musketeers. The yeoman in Chaucer's Canterbury Tales is described as wearing a "baldrick of bright green." The baldric of Pallas plays a key part in the Aeneid, leading Aeneas to kill Turnus. In The Fellowship of the Ring, Boromir is described: "On a baldric he wore a great horn tipped with silver that now was laid upon his knees." In Sir Gawain and the Green Knight Gawain returns from his battle with the Green Knight wearing the green girdle "obliquely, like a baldric, bound at his side,/ below his left shoulder, laced in a knot, in betokening the blame he had borne for his fault."

Some Klingons wear baldrics in Star Trek, such as Kor, Koloth, Kang or Worf although sometimes they are referred to as a sash. The character Worf does so in almost every one of his appearances through two series and four films. In The Next Generation episode "Conundrum", Worf, due to amnesia, mistakenly believes that the baldric indicates his rank or authority, so he briefly assumes command of the Enterprise.

Baldrick is a character in the BBC comedy series Blackadder played by Tony Robinson.

A baldrick is also mentioned in the epic poem by Alfred, Lord Tennyson; The Lady of Shallot; in the tenth stanza: 'And from his blazon'd baldric slung, A mighty silver bugle hung'