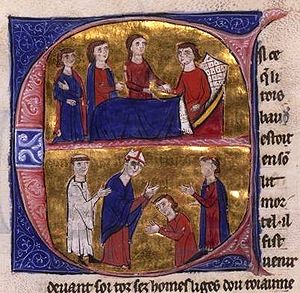 Baldwin V (Baldwin of Montferrat, also known as Baudouinet; August 1177 – August 1186) was crowned co-King of Jerusalem with his uncle, Baldwin IV in 1183, and once his uncle died, reigned alone from 1185 to 1186 under the regency of Count Raymond III of Tripoli. He was succeeded by his mother Sibylla and stepfather Guy.

Baldwin V and the political factions

Baldwin was little more than a pawn in the politics of the Kingdom. By the time he was born, the political situation had developed into two factions. Baldwin IV was dying slowly of leprosy, and the succession was likely to be contested between his older sister Sibylla and their younger half-sister Isabella. Their extended family and leading nobles were divided in support for the two heiresses.

Raymond III of Tripoli, first cousin of their father Amalric I of Jerusalem, had been bailli or regent for Baldwin IV while the latter was a child, but once the king came of age in 1176 his power began to recede. He had a claim to the throne in his own right, but his childlessness hindered him advancing it. Instead, he acted as a power-broker, and aided the interests of the Ibelin family. Amalric's widow (Isabella's mother) Maria Comnena had married Balian of Ibelin, and Raymond attempted to regain influence with a project to marry Sibylla to Balian's older brother Baldwin of Ibelin. However, the king countered this by marrying her to Guy of Lusignan instead in 1180. Guy, as a vassal of the Angevins, from Poitou, had the potential to attract aid from Baldwin IV's cousin Henry II of England to the kingdom.

The other faction, more supportive of Sibylla, centred on her maternal uncle Joscelin III of Edessa and mother Agnes of Courtenay, now the wife of Reginald of Sidon. Allied to them was Raynald of Châtillon, who had been in the country since the Second Crusade and was the widower of Amalric I's cousin Constance of Antioch. Amalric of Lusignan, although a son-in-law of Baldwin of Ibelin, had been won over by the patronage of Agnes and the king, and had brought his younger brother Guy to prominence. Eraclius, appointed Latin Patriarch of Jerusalem in 1180, has sometimes been associated with this group, but also attempted to make peace between the shifting factions.

Baldwin as co-king of Jerusalem

As Baldwin IV became more incapacitated by his leprosy, Guy was appointed bailli of the kingdom. Along with Raynald of Châtillon, he provoked Saladin, sultan of Egypt and Syria, with raids on Muslim caravans. However, in 1183, when Saladin invaded the kingdom, Guy hesitated to respond and was considered a weak commander.

Baldwin IV deposed Guy and took back power to himself, although he was by now blind and bed-ridden. For the next few months he attempted unsuccessfully to have Sibylla's marriage to Guy annulled. Raymond III was invited back, and the Haute Cour was summoned to decide on Baldwin IV's successor. His legal heir was his sister, Sibylla, but it was decided that her son Baldwin of Montferrat would inherit the kingdom, preceding Sibylla's claim. Baldwin V, aged 5, was crowned co-king.

The succession crisis also prompted a mission to the west to seek assistance: in 1184, Patriarch Eraclius, along with Roger de Moulins, Grand Master of the Knights Hospitaller, and Arnaud de Toroge, Grand Master of the Knights Templar, travelled throughout the courts of Europe. Eraclius offered the kingship to both Philip II of France and Henry II of England: the former was the son of Louis VII, a first cousin of Baldwin V's father; the latter was a first cousin of Baldwin IV and Sibylla, and had promised to go on crusade after the murder of Thomas Becket. However, no help was forthcoming from them. Some family support did arrive in the form of Baldwin V's paternal grandfather, William V ("the Elder"), Marquess of Montferrat, who established himself in the castle of St Elias. At around the same time, in the latter part of 1184, Baldwin's maternal grandmother, Agnes of Courtenay, died at Acre.

Baldwin IV finally succumbed to his leprosy in spring 1185. Shortly before his death, he ordered an official public crown-wearing for his nephew at the Church of the Holy Sepulchre (since the little boy had already been crowned). Baldwin V was carried on the shoulders of Balian of Ibelin, not only because Balian was particularly tall, but also to demonstrate that his aunt Isabella's family supported his accession. Baldwin V was now sole king, but being still a minor, Raymond III was his bailli, and his great-uncle Joscelin III of Edessa his personal guardian. 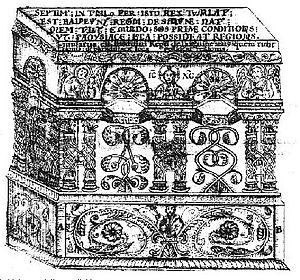 Eighteenth century drawing of Baldwin V's tomb in the Church of the Holy Sepulchre, by Elzear Horn. (Vatican Library)

Baldwin's reign lasted just over a year, and he died in the autumn of 1186, at Acre. His grandfather William and great-uncle Joscelin accompanied his coffin to Jerusalem. He was buried in the Church of the Holy Sepulchre in an elaborately carved tomb-chest, which was mostly destroyed in the early nineteenth century. However, fragments of it have been identified by Zehava Jacoby in the possession of the Orthodox Patriarchate of Jerusalem.

It had been agreed that, should Baldwin V die as a child, the kingdom could be claimed either by his mother Sibylla or his aunt Isabella, the only surviving children of his grandfather Amalric I. The succession would be determined by a council consisting of Baldwin's kinsmen, the Kings of England and France, the Holy Roman Emperor, and the Pope: in the meantime, his "most rightful heir" would act as bailli. This agreement was completely ignored once Baldwin was dead, although it was later invoked by his paternal uncle Conrad (his nearest male relative) in his challenge to Guy's kingship after the Battle of Hattin.

Instead of attending the funeral, the bailli Raymond of Tripoli called an assembly of his supporters at Nablus, the headquarters of the Ibelin family. This suggests that he was already aiming to advance the claim of Isabella (Balian of Ibelin's stepdaughter) and challenge Sibylla.

Sibylla's succession was made conditional on the annulment of her marriage to Guy. (A similar condition had been imposed on her father, who had been forced to divorce her mother.) She was to be given a free choice of a new husband. However, no annulment took place. At her coronation, when Patriarch Eraclius asked her to summon her new consort, she brought Guy forward to be crowned.

Raymond III and the nobles then attempted to stage a coup in order to place Isabella on the throne with her husband Humphrey IV of Toron. Humphrey, however, backed down (he was stepson of Guy's ally Raynald of Châtillon), and swore fealty to Sibylla and Guy. Raymond III, disgusted, returned home to Tripoli, and Baldwin of Ibelin went into self-imposed exile from the kingdom.

Sibylla and Guy's rule proved to be disastrous, and the kingdom was nearly wiped out by Saladin after the Battle of Hattin in 1187. Baldwin V's paternal uncle, Conrad of Montferrat, saved Tyre and carried forward the Montferrat claim to the throne, reinforced by his marriage to Isabella.

Baldwin appears as a minor character in several novels, notably Zofia Kossak-Szczucka's Król trędowaty (The Leper King), Graham Shelby's The Knights of Dark Renown, and Cecelia Holland's Jerusalem, as a sickly small child. Depending on the authors' depictions of Sibylla, he is variously shown as spoiled or neglected. He features in the director's cut of the 2005 film Kingdom of Heaven, but was edited out of the theatrical release. In the Director's Cut the young Baldwin is depicted as having leprosy, like his uncle Baldwin IV. His death in the film is attributed to poisoning at the hands of his mother, shown as a merciful way to spare him his uncle's sufferings. There is no evidence for his having leprosy (which is neither hereditary nor easy to catch), nor for his mother killing him.