Baler is a second-class municipality in the province of Aurora, Philippines.[4] It is the provincial capital of Aurora. It is located some 230 kilometres (143 miles) northeast of Manila via a mountain pass accessible by bus and private vehicle. It is host to spectacular geographic formations and is situated on a vast plain at the south end of Baler Bay, a contiguous segment of the Philippine Sea.

It was identified by Google in 2009 as topping the list of beach destinations in the Philippines.[7] It was described by Yahoo! Southeast Asia in March 2013 as one of the "top surf spots" in the Philippines.[8] Nine-feet waves serve as its main tourist asset, attracting hundreds of surfers during the surfing season from September to February.

Baler is politically subdivided into 13 barangays.[2] 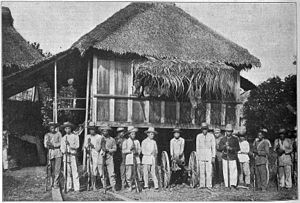 Filipino troops of Colonel Tecson in Baler (May 1899)

In 1609, seven Franciscan missionaries, led by Fray Blas Palomino, founded the settlement of Baler, which was later converted into a pueblo (town) by the Augustinians and the Recollects in 1658. Due to scarcity of religious missionaries, the Franciscans again took over the administration of the settlement in 1703.

On 27 December 1735, a great storm came and a huge wave called tromba marina devastated the old town settlement, then located in Barrio Sabang. Among the survivors were the Angaras, Bijasas, Bitongs, Lumasacs, Carrascos, and Pobletes who swam toward the nearby Ermita Hill.[9] A new community sprang into what is now the Poblacion of Baler, leaving "Kinagunasan," the place of devastation. 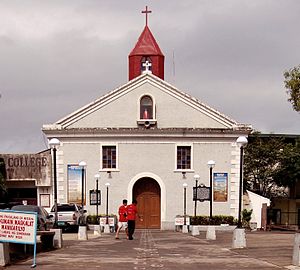 On 27 June 1898, 15 days after the Philippine Independence was proclaimed, 54 Spanish soldiers of the Baler garrison, under the command of Captain Enrique de las Morenas y Fossi, made the San Luis Obispo de Tolosa church their barracks. When Captain De las Morenas died on 22 November 1899, Lieutenant Saturnino Martin Cerezo replaced him. On 2 June 1899, the last Spanish garrison in the Philippines surrendered after the Siege of Baler, effectively ending over 300 years of Spanish rule in the country.[10]

In 1901, the Americans incorporated the town into the province of Tayabas (later named Quezon province). Before the Americans came, Baler was under the district of El Príncipe.

The Comedia de Baler of Aurora mounted its first production in 1927. It was supported by then President Manuel Luis Quezon and enjoyed the collaboration of artists Fortunato Esoreña and Alejandro Ferreras and arnis expert Antonino Ramos. Still alive until today, it features a group of colorfully attired performers using authentic weapons, like swords and knives, in their plays.

In 1956, the barrio of Dingalan was converted into a municipal district within Baler and later became a town in its right.[12]

The League of Cities of the Philippines has the expanding disagreement in opinion against the conversion of sixteen municipalities into constituent cities. The LCP had tried to influence President Gloria Macapagal-Arroyo to certify as call for immediate attention a draft of a law imposing a suspension on the conversion of additional towns into cities.

On the other hand, former Senator Edgardo Angara expect that Baler, the birthplace of the late President Manuel Luis Quezon, will ultimately reach the state of being a city within the year. A bill converting the town of Baler into a city has been filed by House Deputy Majority Leader and Aurora Congressman turned Senator Juan Edgardo Angara, a son of former Senator Ed Angara.

Local Government Code states that before a town could be classified as a city, it must have an annual income of at least Php100 million and a land area of at minimum 100 square kilometres (39 square miles) or a population of 150,000.

Senator Angara advocates House Bill 24 filed by Zamboanga Sibugay Representative ANN Hofer giving automatic cityhood to capitals of provinces without cities by freeing the capital towns of provinces from the income needs of the cityhood. 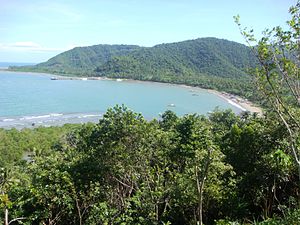 Baler, a Filipino epic film directed by Mark Meily in 2008 has some locations filmed in Baler. It stars Jericho Rosales and Anne Curtis.