The Balkan campaign of 1529 was launched by Suleiman the Magnificent to take the Austrian capital Vienna and thereby strike a decisive blow, allowing him to consolidate his hold on Hungary. This was in response to Ferdinand I's daring assault on Ottoman Hungary.

Suleiman's march to Vienna was also an attempt to assist his vassal, John Szapolyai who claimed the throne of Hungary. Suleiman sent his army of 120,000 strong north on the 10 May 1529 . His campaign was marked by speedy success- on September 8 Buda surrendered to the Ottomans and John Szapolyai was installed as King of Hungary. Suleiman then went further taking Gran, Tata, Komoron and Raab[1] so that much of Ferdinand I's gains the previous two years were lost. On 27 September, Suleiman reached Vienna. 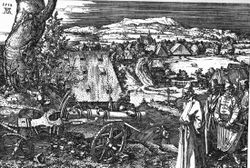 "The Great Gun", an 1518 allegorical representation by Albrecht Dürer of the Turkish menace for the German lands.

The arrival of the Sultan's massive host in Central Europe caused much panic across Europe - Martin Luther, who had believed that the Turks were God's punishment against the sins of Christians[2] modified his views and wrote the book the War with the Turks in 1529 urging that "the scourge of God" should be fought with great vigour. However, when Suleiman began besieging Vienna it would prove to be his first and most decisive blunder.