From Infogalactic: the planetary knowledge core
Jump to: navigation, search
For the linguistic usage of this term, see Balkan sprachbund. 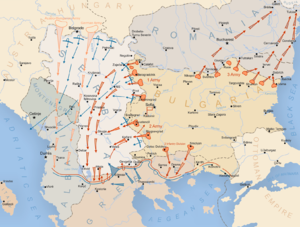 The Bulgarian campaign showing the state of the Balkans during WWI

Balkanization, or Balkanisation, is a pejorative geopolitical term, originally used to describe the process of fragmentation or division of a region or state into smaller regions or states that are often hostile or uncooperative with one another.[1][2] Balkanization is a result of foreign policies creating geopolitical fragmentation as can be seen at times in the Western Balkans with respect to the Ottoman empire, the Austro-Hungarian empire, the Third Reich, the United Nations and NATO. Foreign policies can be precipitous to Balkanization.

The term refers to the division of the Balkan peninsula, formerly ruled almost entirely by the Ottoman Empire, into a number of smaller states between 1817 and 1912.[3] It was coined in the early 19th century and has a strong negative connotation.[4] The term however came into common use in the immediate aftermath of the First World War, with reference to the numerous new states that arose from the collapse of the Austro-Hungarian Empire and the Ottoman Empire.

The larger countries within Europe, often being the result of the union of several historical regions or nations, have faced the perceived issue of Balkanization. The Iberian Peninsula and Spain especially has from the time of Al-Andalus had to come to terms with Balkanization,[5] with several separatist movements existing today including the Basque Country and Catalan independentism.

Canada is a stable country but does harbor separatist movements, the strongest of which is the Quebec sovereignty movement which seeks to create a nation-state that would encompass the majority of Canada's French-Canadian population. Two referendums have been held to decide this question, one in 1980 and the last one in 1995 being lost by the separatist side by a tiny margin. Less mainstream, smaller movements also exist in the western provinces, namely Alberta, to protest what is seen as a domination by Quebec and Ontario of Canadian politics. Saskatchewan premier Roy Romanow had also considered separation from Canada if the 1995 Quebec independence referendum had succeeded; which would have led to the balkanization of Canada.

Quebec has been the scene of a small but vociferous partition movement from the part of anglophone activist groups opposed to the idea of Independence of Quebec, as such a country would be dominated by francophones on the order of 80%. One such project is the Proposal for the Province of Montreal, which wishes for the establishment of a separate province from Quebec from Montreal's strongly anglophone Anglo-Saxon and immigrant communities.

In January 2007, regarding the growing support for Scottish independence, the then-Chancellor of the Exchequer of the United Kingdom, and later Prime Minister, Gordon Brown talked of a "Balkanisation of Britain".[6] Independence movements within Britain also exist in England, Wales, Cornwall and Northern Ireland.

The term is also used to describe other forms of disintegration, including, for instance, the subdivision of the Internet into separate enclaves.[7] However, Robert Morgus' and Tim Maurer's study suggests that the alarmist term “Balkanization” should be replaced with more appropriate terms such as fragmentation and diversity.[8] The term has been used in American urban planning to describe the process of creating gated communities.