Minuteman-III MIRV launch sequence : 1. The missile launches out of its silo by firing its 1st-stage boost motor (A). 2. About 60 seconds after launch, the 1st stage drops off and the 2nd-stage motor (B) ignites. The missile shroud (E) is ejected. 3. About 120 seconds after launch, the 3rd-stage motor (C) ignites and separates from the 2nd stage. 4. About 180 seconds after launch, 3rd-stage thrust terminates and the Post-Boost Vehicle (D) separates from the rocket. 5. The Post-Boost Vehicle maneuvers itself and prepares for re-entry vehicle (RV) deployment. 6. The RVs, as well as decoys and chaff, are deployed. 7. The RVs (now armed) and chaff re-enter the atmosphere at high speeds. 8. The nuclear warheads detonate.

Rockets have been used as weapons for a long time (see History of rockets). A pioneer ballistic missile was the A-4,[1] commonly known as the V-2 rocket developed by Nazi Germany in the 1930s and 1940s under the direction of Wernher von Braun. The first successful launch of a V-2 was on October 3, 1942, and it began operation on September 6, 1944 against Paris, followed by an attack on London two days later. By the end of World War II in May 1945, over 3,000 V-2s had been launched.

The R-7 Semyorka was the first Intercontinental ballistic missile.

A total of 30 nations have deployed operational ballistic missiles. Development continues with around 100 ballistic missile flight tests in 2007 (not including those of the US), mostly by China, Iran, and the Russian Federation.[citation needed] In 2010, the US and Russian governments signed a treaty to reduce their inventory of intercontinental ballistic missiles (ICBMs) over a seven-year period (to 2017) to 1550 units each.[2]

Side view of Minuteman-III ICBM

An Intercontinental ballistic missile trajectory consists of three parts: the powered flight portion; the free-flight portion, which constitutes most of the flight time; and the re-entry phase, where the missile re-enters the Earth's atmosphere. (The flight phases for shorter-range ballistic missiles are essentially the first two phases of the ICBM, as some ballistic categories do not leave the atmosphere.)

Ballistic missiles can be launched from fixed sites or mobile launchers, including vehicles (e.g., transporter erector launchers (TELs)), aircraft, ships, and submarines. The powered flight portion can last from a few tenths of seconds to several minutes and can consist of multiple rocket stages.

When in space and no more thrust is provided, the missile enters free-flight. In order to cover large distances, ballistic missiles are usually launched into a high sub-orbital spaceflight; for intercontinental missiles, the highest altitude (apogee) reached during free-flight is about 1200 km.

The re-entry stage begins at an altitude where atmospheric drag plays a significant part in missile trajectory, and lasts until missile impact. 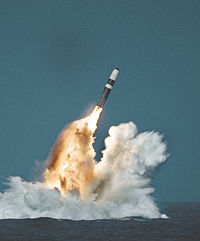 Short- and medium-range missiles are often collectively referred to as theater or tactical ballistic missiles (TBMs). Long- and medium-range ballistic missiles are generally designed to deliver nuclear weapons because their payload is too limited for conventional explosives to be cost-effective (though the U.S. is evaluating the idea of a conventionally armed ICBM for near-instant global air strike capability, despite the high costs).

A quasi ballistic missile (also called a semi ballistic missile) is a category of missile that has a low trajectory and/or is largely ballistic but can perform maneuvers in flight or make unexpected changes in direction and range.[citation needed]

At a lower trajectory than a ballistic missile, a quasi ballistic missile can maintain higher speed, thus allowing its target less time to react to the attack, at the cost of reduced range.