Balmedie is a rapidly growing village in Aberdeenshire in Scotland. It lies north of the city of Aberdeen, in the civil parish of Belhelvie. The long and wide beach is bordered by an extensive dune system that stretches 14 miles (23 km) from Aberdeen to just north of the Ythan Estuary at Newburgh. The dunes are a substantial area of stable grassland where the principal vegetation is marram grass. They support a large array of wildlife. Two watercourses make their way to the sea within the area creating ribbons of wetland vegetation along their course. The area lies within the Sands of Forvie Site of Special Scientific Interest, the fifth largest sand dune system in Britain.[3]

The village facilities include a primary school, a small library and a sports centre. Shops include a small supermarket, a pharmacy, a fish and chip shop and a convenience store/post office. Other services include a car mechanic, a cafe/gallery and the White Horse Inn Hotel, Bar and Restaurant. In 2007 Barratt Developments established its Barratt Homes North Scotland headquarters in Balmedie. Stagecoach East Scotland provides 'Bluebird' bus services linking Balmedie to Aberdeen, Ellon, Fraserburgh and Peterhead. There are four small play parks in Balmedie there are also two full sized football pitches where amateur side Trophies International play their home matches.

The Balmedie Country Park provides amenities within the dunes for visitors, including parking, toilets, wooden walkways across the sands and streams, picnic areas with barbecues, and a swing park with a fishing theme. The park is often used by horse riders as a starting / finishing point for beach rides with room to park a horsebox or trailer.[4] The beach is also known for its vast dunes.

The park is open during the hours of daylight every day of the year. Over the years the beach has won a number of awards.[citation needed]

There is an unofficial naturist area on the beach, a stretch of the beach behind the Blackdog Firing Range. Access can be gained by walking down the beach towards Aberdeen from the Balmedie Country park car park, or by access through the firing range. Range in use is designated by red flags flying in various areas around the range.

During World War Two, Balmedie beach was designated as a bomb cemetery. Defused and unexploded bombs from Luftwaffe raids in Aberdeen were brought here to be cleaned of explosives or detonated on the foreshore. Three pillboxes were build on the dunes at Balmedie to protect a small radar station consisting of three masts. Anti-tank blocks are also located in the dunes along with remains of the barbed wire defences just to the north. 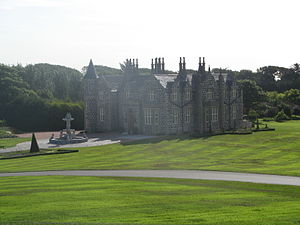 Menie House is a grand 14th-century country property surrounded by over 200 acres (0.81 km2) of private land, collectively known as the Menie Estate. The house was designed by the Aberdeen architect John Smith for George Turner around 1835. It is listed as category B by Historic Scotland.[5]

During World War 2, a beach minefield was laid beside the Mill of Menie in case of a German invasion. The minefield was cleared by the 11th Coy Bomb Disposal under Major W.M. Hewitt of the Royal Engineers. During construction of the Menie golf course, the rusting harmless fragments of a landmine were found.

American billionaire Donald Trump purchased a large part of the estate in 2006. He proposes to build an extensive development there, including two 18-hole golf courses, a 450-room hotel, conference centre and spa, 36 golf villas, 950 holiday homes, accommodation for 400 staff and residential developments comprising 500 houses. Although this would substantially damage habitat at a Site of Special Scientific Interest, according to analysis by Scottish Natural Heritage,[6][7] planning officials from Aberdeenshire Council have recommended approval of the development.[8][9] This subject was covered by documentary film maker Anthony Baxter in his 2011 film You've Been Trumped. 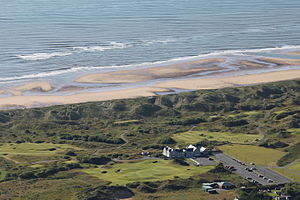 In December 2015 Trump's attempt to prevent the windfarm being built within sight of his golf course was dismissed by five justices at the Supreme Court. Commenting on the decision, former Scottish First Minister Alex Salmond branded Trump "three times a loser". A spokesman for the Trump Organisation responded to Salmond's comment by saying: "Does anyone care what this man thinks? He’s a has-been and totally irrelevant. The fact that he doesn’t even know what’s going on in his own constituency says it all ... He should go back to doing what he does best: unveiling pompous portraits of himself that pander to his already over-inflated ego."[10]