The Baloch or Baluch (Balochi: بلوچ) are a people who live mainly in the Balochistan region of the southeastern-most edge of the Iranian plateau in Pakistan, Iran, and Afghanistan, as well as in the Arabian Peninsula.

They mainly speak the Balochi language, a branch of Northwestern Iranian languages, and are therefore an Iranic people. About 50% of the total Baloch population live in Balochistan, a western province of Pakistan;[10] 40% of Baloch are settled in Sindh; and a significant number of Baloch people in South Punjab of Pakistan. They make nearly 3.6% of the Pakistani population, about 2% of Iran's population (1.5 million) and about 2% of Afghanistan's population.[1] 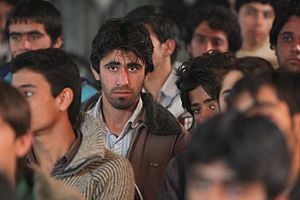 The exact origin of the word 'Baloch' is unclear. One theory is that the word came from the Median word brza-vak, which describes a loud aggressive way of speaking. Others say the word came from the Babylonian king Belus. Still others say it is a nickname meaning "cock's comb", referring to the distinctive helmets that Balochi forces wore when they fought the Median king Astyages in the mid 6th century BCE. Finally, there are some who believe it came from the Sanskrit words "Bal" (meaning strength or power) and "Och" (meaning high or magnificent).[citation needed]

In the Punjab region, the word Baloch is associated with caring of camels and is used to refer to any Muslim camelperson. Because of the importance of camel husbandry in that region, Baloch implies to be light-footed.[citation needed] 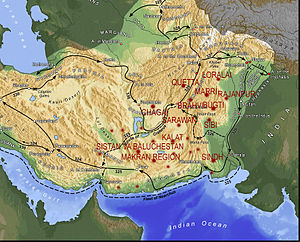 Baloch tribes and the paths that Alexander the Great took.

According to Balochi myths, they are descendants of Hazrat Ameer Hamza, the uncle of the Islamic prophet Muhammad who settled in Halab (present-day Aleppo). In 680, Caliph Yazid I drove them out following the Battle of Karbala and they fled to the Sistan region. They allegedly remained there for 500 years until they fled following a deception against the Sistan leader Badr-ud-Din to Khvosh Mardan.[citation needed]

However, based on an analysis of the lingistic connections of the Balochi language, which is one of the Western Iranian languages, it seems likely that the original homeland of the Balochi tribes were to the east or southeast of the central Caspian region. It is believed that the Baloch began migrating towards the east in the late Sasanian period. The cause of the migration is unknown but may have been as a result of the generally unstable conditions in the Caspian area. The migrations occurred over several centuries.[11] 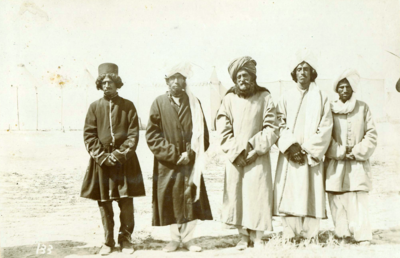 By the 9th century, Arab writers refer to the Baloch as living in the area between Kerman, Khorasan, Sistan, and Makran in what is now eastern Iran[12] Although they kept flocks of sheep, the Balochs also engaged in plundering travellers on the desert routes. This brought them into conflict with the Buyids, and later the Ghaznavids and the Seljuqs. Adud al-Dawla of the Buyid dynasty launched a punitive campaign against them and defeated them in 971-972. After this, the Baloch continued their eastward migration towards what is now Balochistan province of Pakistan, although some remained behind and there are still Baloch in eastern part of the Iranian Sistan-Baluchestan and Kerman provinces. By the 13/14th centuries waves of Baloch were moving into Sindh and by the 15th century into the Punjab.[12]

The area where the Baloch tribes settled was disputed between the Persian Safavids and the Mughal emperors. Although the Mughals managed to establish some control over the eastern parts of the area, by the 17th century, a tribal leader named Mir Hasan established himself as the first "Khan of the Baloch". In 1666, he was succeeded by Mir Aḥmad Khan Qambarani who established the Balochi Khanate of Kalat under the Ahmadzai dynasty.[note 1] Originally in alliance with the Mughals, the Khanate lost its autonomy in 1839 with the signing of a treaty with the British colonial government and the region effectively became part of British Raj.[12] 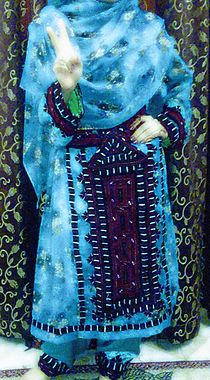 A traditional Balochi dress worn by a teenage girl.

The Balochi generally live in remote mountainous and desert regions, which have protected them from invasion and allowed them to form a distinct cultural identity. They are predominantly Sunni Muslims but a significant number in the Balochistan region are Shia Muslim. Balochi customs and traditions are conducted according to codes imposed by tribal laws. Pir M. Zehi's account of his travel to the province of Sakestan, present-day Sistan province of Iran, have the first mentions of Baloch customs. The Baloch men wear long shirts with long sleeves and loose pants. The dress is occasionally accompanied by a pagh (turban) or a hat on their heads.[citation needed]

In contrast to Pakistan, the Iran Balochi dress code is more conservative in sense of length and material. Some Baloch women in Iran also cover their faces with thick red color wools (Burqah) and wear a (Sareeg) which is the head scarf and (Chadar) which is a long veil.

Baloch women put on loose dresses and pants with sophisticated and colourful needlework, including a large pocket at the front of the dress to hold their accessories. The upper part of the dress and sleeves are also decorated with needlework, a form of artistry that is specific to the clothing of the Baloch women. Often the dress also contains round or square pieces of glass to further enhance the presentation. They cover their hair with a scarf, called a sarig in the local dialect.[18] 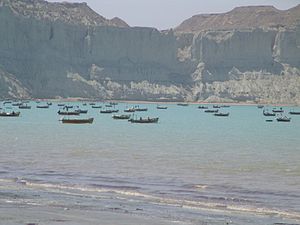 View of a beach in Makran region.

These customs are unique to the people of Iran and the art of this needlework on women's clothing may provide one with a picture of the freedom and high status of Baloch women in Achaemenid era.[19]

Gold ornaments such as necklaces and bracelets are an important aspect of Baloch women's traditions and among their most favoured items of jewellery are dorr, heavy earrings that are fastened to the head with gold chains so that the heavy weight will not cause harm to the ears. They usually wear a gold brooch (tasni) that is made by local jewellers in different shapes and sizes and is used to fasten the two parts of the dress together over the chest. In ancient times, especially during the pre-Islamic era, it was common for Baloch women to perform dances and sing folk songs at different events. The tradition of a Baloch mother singing lullabies to her children has played an important role in the transfer of knowledge from generation to generation since ancient times. Apart from the dressing style of the Baloch, indigenous and local traditions and customs are also of great importance to the Baloch.[20]

Folk music has always played a great role in Balochi traditions. Traditions like the transfer of knowledge from generation to generation by singing lullabies to children and praising warriors also have a significant role in Balochi music traditions. The fact that both men and women participate in folk music reflects on the pre-Islamic significance of folk music in Balochi culture. Many years of invasions, wars and later adopted religious values have prevented Balouchi music from prevailing further in the 21st century. However, a Swedish folk band, Golbang and Padik with the lead singer Rostam Mirlashari originally from Zahedan & Lashar in Balochistan, has made progress in introducing Balouchi folk music to the Western world. The most commonly used instruments in Balouchi folk music are tanbur, long-necked lutes. Lutes have been present in Mesopotamia since the Akkadian era, or the 3rd millennium BC. The dohol, a large cylindrical drum with two skin heads, is the principal accompaniment for the surna, an ancient Iranian woodwind instrument that dates back to the Achaemenid Dynasty (550-330 BC). The ney is also commonly played, using single or double flutes. The Suroz, a Balochi folk violin, which is considered as the official instrument of the Baloch. Other Baloch musical instruments include the tar and the saz.

The total population of ethnic Baloch people is estimated to be around 15 million worldwide. However, the exact number of those who are Baloch or claim to be of Baloch ancestry is difficult to determine. As of 2012, the Baloch are 7.11% of Pakistan's 177 million people.[citation needed] 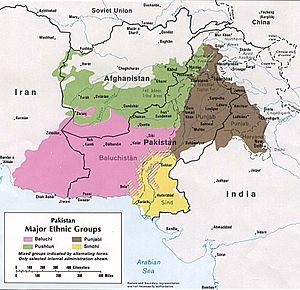 Major ethnic groups in Pakistan, Afghanistan and the surrounding areas, 1980. The Baluch are shown in pink.

Baloch ancestry is also claimed in the neighboring areas that adjoin Baloch majority lands. Those who speak Brahui are known as Brahuis. Many Baloch outside of Balochistan are also bilingual or of mixed ancestry due to their proximity to other ethnic groups, including the Sindhis, Saraikis and Pashtuns. A large number of Baloch have been migrating to or living in provinces adjacent to Balochistan for centuries. In addition, there are many Baloch living in other parts of the world, with the bulk living in the GCC countries of the Persian Gulf. The Baloch are an important community in Oman, where they make up a sizable minority.[citation needed]

Many Baloch over the years have migrated to Punjab for its lush green fertility and they can be found in large numbers in South Punjab, Central Punjab and in Lahore but most of them identify themselves now as Punjabis. There is a small population of Baloch in several Western countries such as Sweden and Australia. Some Baloch settled in Australia in the 19th century; some fourth-generation Baloch still live there, mainly in the western city of Perth.[citation needed]

The Baloch are a substantial ethnic group in Oman and can be easily identified by their surname, Al Balushi. Omani Balochis are fully integrated into Omani society with many holding high ranking posts in the government and private sector, such as: