Balsall Heath is a working class, inner-city area of Birmingham, West Midlands, England. It is home to a diverse cultural mix of people and the location of the Balti Triangle. 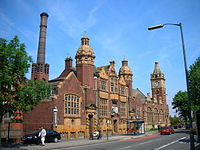 Balsall Heath was agricultural land between Moseley village and the city of Birmingham until the 1850s when expansion along Moseley Road joined the two. The area was originally part of the Worcestershire parish of King's Norton, and was added to the county borough of Birmingham in Warwickshire on 1 October 1891.

During negotiations in the previous year it had been promised a public baths and a free library. In 1895 the library was opened on Moseley Road and in 1907 Balsall Heath Baths were opened in an adjoining building.

In 1900 the city's College of Art was also opened on Moseley Road. By this time the small lake (Lady Pool on old maps) at the end of Ladypool Road had been filled-in to create a park.

Balsall Heath initially had a reasonably affluent population, which can still be seen in the dilapidated grandeur of some of the larger houses. A railway station on Brighton Road (on the Birmingham to Bristol line) led to further expansion, and the end of the 19th century saw a proliferation of high-density small terraced houses.

A Muslim community was started in June 1940 when two Yemenis purchased an artisan cottage on Mary Street. They went on to establish the first mosque in the city. With the mosque being located in the area, more Muslim immigrants began to move into private lodgings in Balsall Heath.[1] Today, Balsall Heath has one of the largest Muslim communities in Birmingham. It is also home to diverse communities from across the Commonwealth.

By the 1980s, many of Balsall Heath's houses were in a dilapidated condition, some were still without bathrooms or indoor toilets. The local council considered demolishing these properties but chose to refurbish them as part of an urban renewal scheme. Most of these Victorian terraces still exist and, along with more modern social housing, characterise the area today. The area's traditional 'brick' pavements were replaced at this time by the more modern and conventional paving slabs.

Balsall Heath's low rents also attracted a bohemian student population. Its proximity to the University of Birmingham, the city centre and the 'trendy' area of Moseley were all contributing factors. There was little conflict between the students and locals despite their vastly differing lifestyles. However a knife-incident in 1991 led to an article in Redbrick warning students not to live in the area.

In July 2005 Balsall Heath was hit by a tornado, which devastated many buildings around Church Road and Ladypool Road. Birmingham City Council offered loans to those who were unable to repair their properties, and the area has now made a full recovery.

Street prostitution first appeared in Balsall Heath during the 1950s. Property values fell, attracting Birmingham's poorer migrants. By the 1970s the area was notorious for street robberies and drug dealing. Cheddar Road was the centre of a red-light district worked by 450 women. About half of the 50 houses on this road had prostitutes advertising themselves in the windows, similar to Amsterdam. It was labelled Britain's busiest cul-de-sac.[2]

In 1986 an organisation called ANAWIM was formed by the Sisters of Charity to provide outreach support to the prostitutes.[3]

In September 1992, a report was published encouraging the formation of a zone of tolerance towards prostitution in Balsall Heath. This was opposed by residents and a local police inspector. The following year Samo Paull, a woman working as a prostitute, was abducted from Balsall Heath and murdered.

In 1994 local residents began to organise street patrols forcing the prostitutes and street criminals out of the area. These patrols had the qualified support of the police but were regarded as vigilantes by some. There was an immediate two-thirds reduction in street and window prostitution.[2] By November 1995 they had been almost completely eliminated.

The area has now enjoyed a slow revival. House prices are now similar to those in other inner-city areas, while the crime rate is amongst the lowest.