The Baltic Exchange is the provider of information on maritime transportation markets, used for the trading and settlement of physical and derivative contracts. 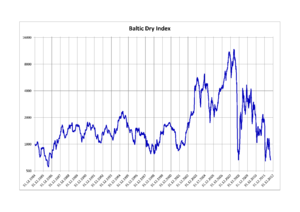 Its international community of over 600 member companies encompasses the majority of world shipping interests and commits to a code of business conduct overseen by the Baltic. Baltic Exchange members are responsible for a large proportion of all dry cargo and tanker fixtures as well as the sale and purchase of merchant vessels.

The company was founded in the mid-18th century, with leading founding shareholders being Stephen Ralli and Michael Rodocanachi, whose families were from the Chian Diaspora.[1] The first use of the name was at the Virginia and Baltick Coffee House in Threadneedle Street in 1744, and was registered as a private limited company with shares in 1900. Today the exchange is owned by its member companies and is not publicly traded on a stock exchange. It is governed by a member-elected Board of Directors. It is located at 38 St Mary Axe in central London with further offices in Europe and the across Asia.

The exchange provides daily freight market prices and maritime shipping cost indices which are used to guide freight traders as to the current level of various global shipping markets as well as being used to set freight contract rates and settle freight futures (known as Forward Freight Agreements or FFAs). Originally operating a trading floor, the exchange's members' transactions are today done solely over the telephone or on broker-owned screens.

The exchange is the source of market-wide information and publishes seven daily indices made up from a suite of wet and dry benchmarked individual shipping voyages:

As of December, 2008, the current management includes:

The historic building was designed by Smith and Wimble[2] and completed by George Trollope & Sons in 1903:[3] it was subsequently listed as a Grade II* listed building.[4]

Bombing of the exchange building

On 10 April 1992 at 9:20 pm, the façade of the Exchange's offices at 24-28 St Mary Axe was partially demolished, and the rest of the building was extensively damaged in a Provisional Irish Republican Army bomb attack. The one-ton bomb was contained in a large white truck and consisted of a fertilizer device wrapped with a detonation cord made from 45 kg of semtex. It killed three people: Paul Butt, 29, Baltic Exchange employee, Thomas Casey, 49, and 15-year-old Danielle Carter. Another 91 people were injured.[5]

The bomb also caused damage to surrounding buildings, many of which were also badly damaged by the Bishopsgate bombing the following year. The bomb caused £800 million worth of damage, £200 million more than the total damage caused by the 10,000 explosions that had occurred during the Troubles in Northern Ireland up to that point.[6]

Architectural conservationists wanted to reconstruct what remained from the bombing, as it was the last remaining exchange floor in the City of London. English Heritage, the government's statutory conservation adviser, and the City of London Corporation insisted that any redevelopment must restore the building's old façade onto St Mary Axe. Baltic Exchange, unable to afford such an expensive undertaking alone, sold the site to Trafalgar House in 1995. The remaining sculptures and masonry of the structurally unstable façade block on the site were photographed and dismantled before the sale; the interior of the Exchange Hall, which was regarded as stable, was initially sealed from the elements in the hope that it would be preserved in situ in any new development, but was subsequently dismantled and stored offsite in 1995-1996.

English Heritage later discovered that the damage was far more severe than they had previously thought. Accordingly, they stopped insisting on a full restoration. What remained of Exchange Hall was completely razed in 1998 with the permission of the planning minister John Prescott over the objections of architectural preservationists, including Save Britain's Heritage, who sought a judicial review of his decision.

The site, together with that of the Chamber of Shipping at 30-32 St Mary Axe, is now home to the building commissioned by Swiss Re commonly referred to as "The Gherkin".

The stained glass of the Baltic Exchange war memorial, which had only suffered superficial damage in the bomb blast, has been restored and is in the National Maritime Museum.

Its classic red granite, coloured marble, Portland stone, and much of the original plaster interiors that survived the bomb were first stored in a Reading warehouse before being sold in 2003 to salvage dealer Derek Davies, who moved them to Cheshire. Davies put the elements on SalvoWEB in February 2003, finally selling the 1,000 tonnes or more to salvage dealer Dennis Buggins in late 2005. Buggins then moved the elements from Cheshire to various barns around Canterbury in Kent.[7]

In June 2006 an Estonian businessman, Eerik-Niiles Kross, found an advertisement for the components of the Baltic Exchange building on SalvoWEB while trawling the web for reclaimed flooring.[8] He and his business partner Heiti Hääl bought the Baltic Exchange elements for £800,000[9] from Dennis Buggins of Extreme Architecture, and the 49 containers were shipped via Felixstowe to Tallinn in June 2007[10] where the exchange will be rebuilt in Central Tallinn. The new building is still in the planning stages and a site has not yet been found. Construction has been postponed due to the financial crisis.[11]