From Infogalactic: the planetary knowledge core
Jump to: navigation, search
For other uses, see Baltic (disambiguation). 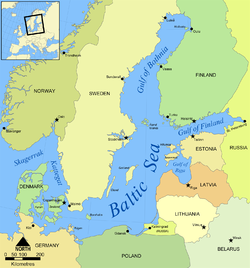 The first to name it the Baltic Sea ("Mare Balticum") was eleventh century German chronicler Adam of Bremen.

Depending on the context the Baltic region might stand for: