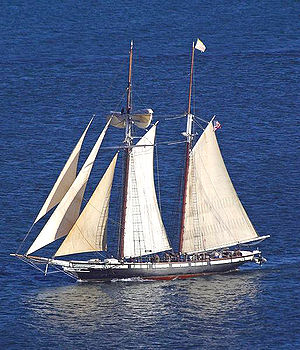 Baltimore Clipper is the colloquial name for fast sailing ships built on the mid-Atlantic seaboard of the United States of America, especially at the port of Baltimore, Maryland. The name is most commonly applied to two-masted schooners and brigantines.

Baltimore clippers were first built as small, fast sailing vessels for trade around the coastlines of the United States and the Caribbean Islands. Their hull-lines tended to be very sharp, with a "V"-shaped cross-section below the waterline and strongly raked stem, stern posts, and masts. The origins of the type are unknown but certainly hulls conforming to the concept were being built in Jamaica and Bermuda (the hull of the Bermuda sloop, designed for the open ocean, was broader than the Jamaican and deeper than the American or iroqouis) and by the late 18th century were popular both in Britain and the United States.[1] 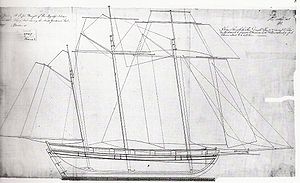 Drawing for the Flying Fish class, modeled on an American vessel, sent to Bermudian builders by the Admiralty.

They were especially suited to moving low-density, high value perishable cargoes such as slaves, and in that trade operated as far afield as the west coast of Africa. Similar vessels were built as privateers during the War of Independence and the War of 1812, and as pilot boats. The famous yacht America, derived from the lines of a New York pilot boat, was conceptually not far removed from the Baltimore clipper. Many such vessels went to Australia during the Australian gold rush, or after being seized as slavers and sold.[2]

One particularly famous Baltimore Clipper, and one of the last of the type in commercial service, was the schooner Vigilant that traded around the Danish Caribbean islands for over a century before sinking in a hurricane on September 12, 1928. She was believed to have been built in the 1790s.

An original Baltimore Clipper. These were used as privateers during the War of 1812.