The Baltimore Plot was an alleged conspiracy in late February 1861 to assassinate President-elect Abraham Lincoln en route to his inauguration. Allan Pinkerton, founder of the Pinkerton National Detective Agency, played a key role by managing Lincoln's security throughout the journey. Though scholars debate whether or not the threat was real, clearly Lincoln and his advisors believed that there was a threat and took actions to ensure his safe passage through Baltimore, Maryland.

On November 6, 1860, Lincoln was elected as the 16th President of the United States, a Republican, and the first to be elected from that party. Shortly after his election, many representatives of Southern states made it clear that secession was inevitable, which greatly increased tension across the nation. A plot to assassinate Lincoln in Baltimore was alleged. On February 23, 1861, he arrived secretly in Washington, D.C. For the remainder of his presidency Lincoln's many critics would hound him for the seemingly cowardly act of sneaking through Baltimore at night, in disguise, sacrificing his honor for his personal safety. However, the efforts at security may well have been prudent.

Allan Pinkerton was commissioned by the railroad to provide security for the president-elect on his journey to Washington, D.C., through Baltimore. Maryland was a slave state seen as a border state with strong Southern sympathies and thus dangerous territory through which to travel for such a controversial politician. Two months later, Baltimoreans attacked Union Army soldiers marching to Washington. When Virginia joined the Confederacy, it was necessary to travel through Maryland to reach Washington.

Feelings were running high in the other direction as well, and the U.S. government was not about to take risks. Later the same year, many civil liberties were effectively suspended. Pinkerton, in particular, was a very careful man. 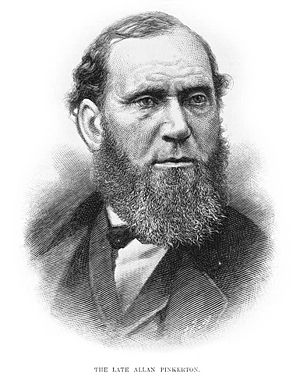 On February 11, 1861, President-elect Lincoln boarded an east-bound train in Springfield, Illinois at the start of a whistle stop tour of seventy towns and cities ending with his inauguration in Washington, D.C. Pinkerton had been hired by railroad officials to investigate suspicious activities and acts of destruction of railroad property along Lincoln's route through Baltimore. Pinkerton became convinced that a plot existed to ambush Lincoln's carriage between the Calvert Street Station of the Northern Central Railway and the Camden Street Station of the Baltimore and Ohio Railroad. This opportunity would present itself during the President-elect's passage through Baltimore on February 23, 1861. Pinkerton tried to persuade Lincoln to cancel his stop at Harrisburg, Pennsylvania, and to proceed secretly straight through Baltimore, but Lincoln insisted upon keeping to his schedule.

Pinkerton famously clashed with Lincoln's friend and escort, Ward Hill Lamon, over the President-elect's protection. Lamon offered Lincoln "a Revolver and a Bowie Knife" but Pinkerton protested that he "would not for the world have it said that Mr. Lincoln had to enter the National Capitol armed."[1]

On the evening of February 22 telegraph lines to Baltimore were cut at Pinkerton's behest to prevent communications from passing between potential conspirators in Pennsylvania and Maryland. Meanwhile, Lincoln left Harrisburg on a special train and arrived secretly in Baltimore in the middle of the night. The most dangerous link in the journey was in Baltimore, where a city ordinance prohibited night-time rail travel through the downtown area. Therefore, the railcars had to be horse-drawn between the President Street and Camden Street stations. 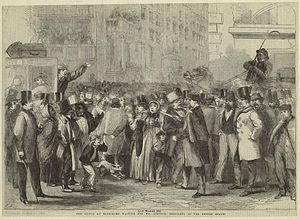 The crowd waiting for Lincoln was disappointed

According to Pinkerton, a captain of the roads reported that there was a plot to stab the President-elect. The alleged plan was to have several assassins, armed with knives, interspersed throughout the crowd that would gather to greet Lincoln at the President Street station. When Lincoln emerged from the car, which he must do to change trains, at least one of the assassins would be able to get close enough to kill him.

Once Lincoln's rail carriage had safely passed through Baltimore, Pinkerton sent a one-line telegram to the president of the Philadelphia, Wilmington and Baltimore Railroad: "Plums delivered nuts safely."

On the afternoon of February 23, Lincoln's scheduled train arrived in Baltimore. The large crowd that gathered at the station to see the President-elect quickly learned that Lincoln had already passed by. Even though the rest of the Lincoln party, including Mrs. Lincoln and the children, had been on this train as originally scheduled, they had already alighted from the train in an unscheduled stop several blocks north of the President Street station.[2][3]

People associated with the alleged plot 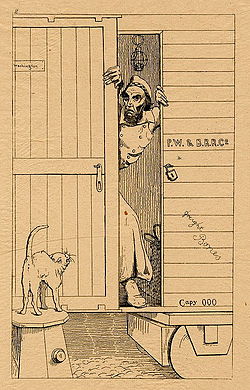 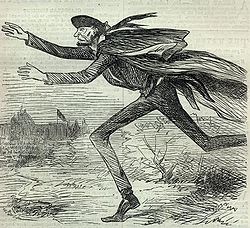 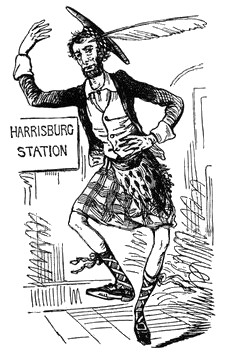 Many historians believe that Pinkerton's perception of an assassination plot was incorrect and Lincoln came to regret that he had slipped through the city unannounced.[5][not in citation given] Many years after the fact Ward Hill Lamon would publicly argue that there had been no plot to assassinate the president in 1861. "It is perfectly manifest that there was no conspiracy—no conspiracy of a hundred, of fifty, of twenty, of three; no definite purpose in the heart of even one man to murder Mr. Lincoln in Baltimore."[6]

In Lincoln and His Administration, Chittenden argues that there was no need for any precautions, such as a disguise, because Lincoln "entered the sleeping–car at Philadelphia, and slept until awakened within a few miles of Washington." This account contradicts other first-hand accounts, which state that Lincoln spent a sleepless and anxious night with Lamon and Pinkerton, during which he "spoke in a quiet voice to avoid being noticed."[7]

Legitimate or not, many sources report, "There is little doubt that the feeling and sentiment of the people of Baltimore is very bitter against Mr. Lincoln, so much so, indeed, that violence might have been attempted."[citation needed]

Whether or not the President-elect was ever in any real danger of being assassinated, Lincoln's efforts to reach Washington, D.C., safely instantly became a humiliating cause célèbre across the nation, much to his chagrin.

Several elements of the initial New York Times article of February 23, 1861, were especially damning. Primarily, the fact that such a negative report came from an ardently Republican newspaper gave it instant credibility[8]—much more than it would have enjoyed if it had come from a Copperhead or Southern source. When The New York Times published Joseph Howard, Jr.'s account of the President-elect disguised in a scotch-cap and long cloak, the nation "rocked with laughter, bringing abuse and ridicule down on Lincoln.".[9] Substantively, the Howard article was a direct assault on Lincoln's manliness. The article states that Lincoln was reluctant—too scared—to go and was only compelled to go by Colonel Sumner's indignation and by the insistence—shame—of his wife and several others.[10]

The newspapers relentlessly lampooned Lincoln for slipping through Baltimore in the dead of night. Adalbert J. Volck, a Baltimore dentist and caricaturist, was inspired to pen his famous satirical etching "Passage through Baltimore". Volck's image of a startled Lincoln in his nightshirt peering out of the side of his rail car as it passes through Baltimore has become part of the Lincoln iconography. "In the nineteenth century, when pictures were less common and more prized, the scotch-cap symbol remained a prop in Confederate graphics, and some Northern-made prints as well, for years—the reminder of Lincoln fleeing in disguise an automatic accusation of his supposed lack of character."[11]

For the rest of his presidency, the story of his sneaking like a coward through Baltimore would be told and retold by his enemies, with particular effect by cartoonists of the day. He was drawn with many variations of Scottish headwear, which eventually morphed into a Scottish balmoral cap and very short kilt. The absurd disguise was often accompanied by a terrified expression on the President-elect's face, to further undermine the public's image of his courage and manliness. Images such as a comic strip in Harper's Weekly plagued Lincoln throughout his presidency.

Newspapers of all parties mocked Lincoln's actions. In a Vanity Fair cartoon, the kilt was traded for a dress the president had borrowed from his wife. By the time Abraham Lincoln arrived in Washington, he was the laughing stock of the entire country.[12]

The New York Tribune was nonetheless forced to admit "It is the only instance recorded in our history in which the recognized head of a nation [...] has been compelled, for fear of his life, to enter the capital in disguise." More blunt was the denunciation by the Baltimore Sun:

Had we any respect for Mr. Lincoln, official or personal, as a man, or as President-elect of the United States [...] the final escapade by which he reached the capital would have utterly demolished it. [...] He might have entered Willard's Hotel with a "head spring" and a "summersault," and the clown's merry greeting to Gen. Scott, "Here we are!" and we should care nothing about it, personally. We do not believe the Presidency can ever be more degraded by any of his successors than it has by him, even before his inauguration.[13]

The Pratt Street riot in Baltimore on April 19 and the subsequent arrest and imprisonment of many prominent city residents did little to endear Baltimore to the Union.[citation needed]

In 1951, Metro-Goldwyn-Mayer released a fictional re-creation of the alleged plot against Lincoln, The Tall Target. Its story generally follows what is known about the Baltimore Plot, with some differences. It is a New York Police Department detective named John Kennedy, played by Dick Powell, who contacts the administration about the conspiracy, and who boards the train hoping to discover whether any of the plotters are on board before they reach Baltimore. Kennedy discovers a plot that involves a riot to distract police protection away from Lincoln and a sharpshooter armed with a rifle with a telescopic sight to shoot the President-elect. Through Kennedy's efforts, the attempt is aborted and key members of the conspiracy are identified. There actually was an NYPD officer, John Alexander Kennedy, who claimed to have been the one who uncovered the Baltimore Plot; but, unlike Powell's movie character, he was not actually on scene. Moreover, in real life, Kennedy was the Superintendent of the entire force. In the film, he is depicted as a mere detective sergeant.[citation needed]

"The Death Trap", an episode of the 1966–1967 television series The Time Tunnel, includes the 1861 Baltimore plot, although it also depicts a brief difficulty with the time machine that caused the showing of (an enactment of) the April 14, 1865 shooting of Lincoln at Ford's Theatre in Washington.[14] The episode depicts a bomb being used in the 1861 Baltimore plot, and has the attempt being plotted by Abolitionists who hope to plunge the nation into a war in which slavery will be ended; the plotters are apparent sympathizers with John Brown, who had already been hanged. (The Civil War actually began in April 1861, with the attack on Fort Sumter.)