It is notable for two reasons: the imposing Bamburgh Castle, overlooking the beach, seat of the former Kings of Northumbria, and at present owned by the Armstrong family (see William George Armstrong); and its association with the Victorian heroine, Grace Darling, who is buried there.

Its extensive sandy beach was awarded the Blue Flag rural beach award in 2005. The Bamburgh sandy hills, an area of sand dunes which are a Site of Special Scientific Interest, stand behind the award-winning beach. Bamburgh is popular with holidaymakers and is within the Northumberland Coast Area of Outstanding Natural Beauty.

Bamburgh Castle, then called Din Guardi, may have been the capital of the Brythonic kingdom of Bryneich between about AD 420 and 547. In 547 the castle was taken by the invading Angles led by Ida son of Eoppa[3] and was renamed Bebbanburgh by one of his successors, Æthelfrith, after his wife Bebba, according to the Historia Brittonum. From then onwards the castle became the capital of the Anglian kingdom of Bernicia until it merged with its southern neighbour, Deira, in 634. After the two realms united as Northumbria the capital was moved to York.

Bamburgh was again the capital of local Bernician rulers after the Viking destruction of the old Northumbrian kingdom in 867. Initially puppets of the Vikings, they later had more autonomy under either the Vikings or Kings of united England. The rulers of Bernicia held the title of High Reeve of Bamburgh from at least 913 until 1041, when the last was killed by Harthacnut; sometimes – 954–963 and 975–1016 – they also served as Earls of York. The castle was destroyed in a renewed Viking attack in 993 and in 1018 the Lothian part of Bernicia was ceded to Scotland, significantly reducing the area controlled from Bamburgh.

Edward IV ruled all England in 1464, during the Wars of the Roses, in which time the Percy family, Earls of Northumberland, were based at Bamburgh Castle.

Sir Thomas Mallory considered Bamburgh to be Lancelot's castle Joyous Gard. The Victorian poet Algernon Charles Swinburne agreed and called it "The noblest hold in all the North."

"They saw the help and strength of Joyous Gard,
The full deep glorious tower that stands over
Between the wild sea and the broad wild lands..."

Swinburne swam here, as did the novelist E. M. Forster who adopted the Forsters of Bamb-bra as his ancestors. 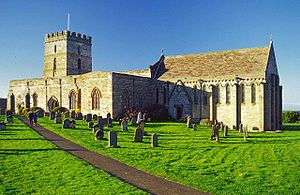 According to Bede, St Aidan built a wooden church outside the castle wall in AD 635, and he died here in AD 652. A wooden beam preserved inside the church is traditionally said to be the one on which he rested as he died.

The present church dates from the late 12th century, though some pre-conquest stonework survives in the north aisle. The chancel, said to be the second longest in the country (60 ft; 18m), was added in 1230; it contains an 1895 reredos in Caen stone by W.S. Hicks, depicting northern saints of the 7th and 8th centuries. There is an effigy of local heroine Grace Darling in the North Aisle. Her memorial is sited in the churchyard in such a position that it can be seen by passing ships.[4]

An electoral ward of the same name exists. This ward includes Belford and also stretches south to Ellingham with a total population taken at the 2011 census of 4,846.[5]

Bamburgh Lighthouse was built by Trinity House in 1910 to guide shipping both passing along the Northumberland coast and in the waters around the Farne Islands. It was extensively modernised in 1975 and is now monitored from the Trinity House Operations and Planning Centre in Harwich. Routine maintenance is carried out by a local attendant. It is the most northerly land-based lighthouse in England.[6]

When originally built, the lamp was mounted on a skeletal steel tower (the footprint of which can still be seen within the compound) which stood alongside the white building which housed an acetylene plant to power the lamp.[7] (A similar arrangement can be seen today at Peninnis Lighthouse.) During electrification in 1975 the tower was removed, and the lantern was placed instead on top of the (now redundant) acetylene building. Keepers' accommodation has never been needed, as the light was automated from the start.