Banana Wars is the term used by some historians[1] to refer to the occupations, police actions, and interventions involving the United States in Central America and the Caribbean between the Spanish–American War (1898) and the inception of the Good Neighbor Policy (1934).[2] These military interventions were most often carried out by the United States Marine Corps. The Marines were involved so often that they developed a manual, The Strategy and Tactics of Small Wars, in 1921. On occasion, the Navy provided gunfire support and Army troops were also used.

With the Treaty of Paris, Spain ceded control of Cuba, Puerto Rico, and the Philippines to the United States. Thereafter, the United States conducted military interventions in Panama, Honduras, Nicaragua, Mexico, Haiti, and the Dominican Republic. The series of conflicts only ended with the withdrawal of troops from Haiti in 1934 under President Franklin D. Roosevelt. 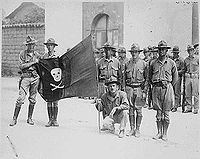 Reasons for these conflicts were varied but largely economic in nature. The conflicts were called "Banana Wars", a term that arose from the connections between these interventions and the preservation of US commercial interests in the region.

Most prominently, the United Fruit Company had significant financial stakes in the production of bananas, tobacco, sugar cane, and various other products throughout the Caribbean, Central America and Northern South America. The US was also advancing its political interests, maintaining a sphere of influence and controlling the Panama Canal (opened 1914) which it had recently built and was important for global trade and projecting naval power. 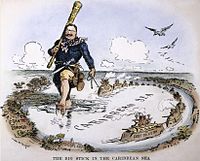 American warships off Veracruz in 1914

Other Latin American nations were influenced or dominated by American economic policies and/or commercial interests to the point of coercion. Theodore Roosevelt declared the Roosevelt Corollary to the Monroe Doctrine in 1904, asserting the right of the United States to intervene to stabilize the economic affairs of states in the Caribbean and Central America if they were unable to pay their international debts. From 1909-1913, President William Howard Taft and his Secretary of State Philander C. Knox asserted a more "peaceful and economic" Dollar Diplomacy foreign policy, although that too was backed by force, as in Nicaragua.

The first decades of Honduras history were marked by instability in terms of politics and economy. Indeed, the political context gave way to 210 armed conflicts between independence and the rise to power of the Carias government.[8] According to Miguel Cáceres Rivera and Sucelinda Zelaya Carranza, this instability was due in part to the American involvement in the country.[8]

There were different avenues that led to the signature of a contract between the Honduras government and the American companies. The most popular avenue would be to obtain a grab on a piece of land in exchange of the completion of railroads in Honduras.[8] It is, thus, the reason why it is a railroad company that conducted the agreement between the United Fruit Company and Honduras.

However, according to Mark Moberg, most banana producers in Central America (including Honduras) "were scourged by Panama disease, a soil-borne fungus (…) that decimated production over large regions".[9] Therefore, when a plantation would be decimated, the companies would leave the plantation as is, and destroyed the railroads (and other utilities) that they had been using along with the plantation.[9] Therefore, one might argue that the exchange of services between the government and the companies was not always respected.

The ultimate goal in the acquisition of a contract was to control the process from production to distribution of the bananas. Therefore, the companies would finance guerrilla fighters, presidential campaigns and governments.[8] According to Rivera and Carranza, the indirect participation of American companies in the country's armed conflicts worsened the situation.[8] They argued that the presence of more dangerous and modern weapons gave place to more dangerous warfare amongst the different factions.[8]

In British Honduras (modern-day Belize), the situation was slightly different. According to Mark Moberg, despite the fact that the United Fruit Company was the sole-exporter of bananas in British Honduras, and that the company was also manipulating the government, the country escaped itself from the term "banana republics" that had been coined to other Central American countries at the time.[9]

Perhaps the single most active military officer in the Banana Wars was U.S. Marine Corps Major General, Smedley Butler, who saw action in Honduras in 1903, served in Nicaragua enforcing American policy from 1909–1912, was awarded the Medal of Honor for his role in Veracruz in 1914, and a second Medal of Honor for bravery while "crush(ing) the Caco resistance" in Haiti in 1915. In 1935, Butler wrote in his famous book War Is a Racket:

I spent 33 years and four months in active military service and during that period I spent most of my time as a high class muscle man for Big Business, for Wall Street and the bankers. In short, I was a racketeer, a gangster for capitalism. I helped make Mexico and especially Tampico safe for American oil interests in 1914. I helped make Haiti and Cuba a decent place for the National City Bank boys to collect revenues in. I helped in the raping of half a dozen Central American republics for the benefit of Wall Street. I helped purify Nicaragua for the International Banking House of Brown Brothers in 1902-1912. I brought light to the Dominican Republic for the American sugar interests in 1916. I helped make Honduras right for the American fruit companies in 1903. In China in 1927 I helped see to it that Standard Oil went on its way unmolested. Looking back on it, I might have given Al Capone a few hints. The best he could do was to operate his racket in three districts. I operated on three continents.

Notable U.S. veterans of the Banana Wars include: