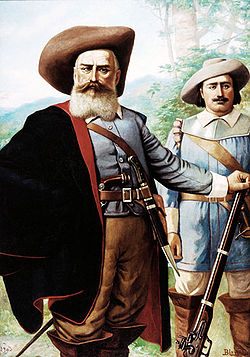 The Bandeirantes (Portuguese pronunciation: [bɐ̃dejˈɾɐ̃t(ʃ)is], "those who carry the flag") were 17th-century Portuguese settlers in Brazil and fortune hunters. This group mostly hailed from the São Paulo region,[Note 1] which was known as the Captaincy of São Vicente until 1709, and subsequently as the Captaincy of São Paulo. They led expeditions called bandeiras (Portuguese, "flags") which penetrated the interior of Brazil far south and west of the Tordesillas Line of 1494, which officially divided the Spanish (west) domain from the Portuguese (east) domain in South America.

The São Paulo settlement served as the home base for the most famous bandeirantes.[Note 2] Most bandeirantes were descendants of first- and second-generation Portuguese who settled in São Paulo,[citation needed] but their numbers also included some Spanish (Galicians, Basques, Castilians), and in some cases Italians (Neapolitans, Calabrese). Though they originally aimed to capture and force Indigenous Americans into slavery, the bandeirantes later began to focus their expeditions on finding gold, silver, and diamond mines. As they ventured into unmapped regions in search of profit and adventure, they expanded the effective borders of the Brazilian colony.

Bandeiras were not state organized, but rather were privately run, and hence the men paid for their own equipment. This also that the members of the expeditions, at least the non-slaves, willingly and knowingly traversed into the wilderness for months or years[citation needed] at a time.

Bandeiras participated in the Battle of Mbororé, which took place on March 11, 1641. In this battle, the Guaranís of the Jesuit Reductions fought against bandeirantes and other Portuguese explorers.

The course of the bandeira route was a difficult and perilous one. The men were faced with hunger, fatigue, disease, and death. 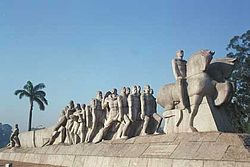 The Monument to the bandeiras, a stone sculpture group by Victor Brecheret, located in São Paulo, Brazil

Despite the fact that the Jesuit missionaries were the chief opponents of the bandeirantes, priests accompanied the bandeira so to shrive the dying and the dead, as well as to ease the conscience of the men. Priests also held mass for the bandeira before they left on their expedition. Between 1628 and 1670 the bandeiras focused on slave hunting, then from 1670 until the early 18th century they focused on mineral wealth.

The main focus of the bandeirantes' earlier missions was to enslave native populations. They carried this out by disguising themselves as Jesuits, often singing mass to lure the natives out of their settlements. However, they usually relied on surprise attacks. If luring the natives with promises did not work, the bandeirantes would surround the settlements and set them alight, forcing inhabitants out into the open. The natives would then be captured and placed into a large outdoor pen, until there were enough of them enslaved to justify a trip back to the coast, where they would be sold as slaves. It could be weeks or months until this was the case, and so hundreds of captives died of exposure. On the journey to the coast, the captives would be stripped and tied to a long pole to prevent them from trying to flee from their captivity.

There were over 2.5 million Indigenous peoples in Brazil in 1500.[1] By the middle of the 18th century, the number had dropped to estimated 1 million to 1.5 million.[citation needed] Many tribes living close to the Atlantic coast intermixed with Portuguese or died of diseases. By the 18th century, others had fled into the interior, and their flight created an ever greater need for slaves, one that was not entirely satisfied by importing them from Africa. Native slaves sold for about $30–$40, while the imported African slaves sold from $100–$500. The bandeirantes were able to sell many native slaves due to their relatively inexpensive price, thus profiting at large.

The first bandeira took place in 1628 and was organized by Antônio Raposo Tavares. This bandeira raided 21 Jesuit villages in the upper Paraná Valley, ultimately capturing about 2,500 natives. A bandeira tactic was to set native tribes against each other in order to weaken them, and then to enslave both of them.

In 1628, Tavares led a bandeira, composed of 2,000 allied Indians, 900 mamelucos, and 69 white Paulistas, to find precious metals and stones and to capture Indians for slavery. This expedition alone was responsible for the destruction of most of the Jesuit missions of Spanish Guayrá and the enslavement of over 60,000 indigenous people. Between 1648 and 1652, Tavares also led one of the longest known expeditions from São Paulo to the mouth of the Amazon river, investigating many of its tributaries, including the Rio Negro, ultimately covering a distance of more than 10,000 kilometers. The expedition travelled to Andean Quito, part of the Spanish Viceroyalty of Peru, and stayed there for a short time in 1651. Of the 1,200 men who left São Paulo, only 60 reached their final destination in Belém.

Besides the purpose of capturing natives as slaves, bandeiras also helped to extend the power of Portugal by expanding its control over the Brazilian interior. Along with the exploration and settlement of this territory[disputed – discuss] the bandeiras also discovered mineral wealth for the Portuguese, which they were previously unable to lavish in.

In the 1660s, the Portuguese government offered rewards to those who discovered gold and silver deposits in inner Brazil. So, the bandeirantes, driven by greed, ventured into the depths of Brazil not only to enslave natives, but also to find mines and receive government rewards. As the number of natives diminished, the bandeirantes began to focus more heavily on hunting minerals.

The bandeirantes were responsible for the discovery of mineral wealth, and along with the missionaries, for the territorial enlargement of central and southern Brazil. This mineral wealth made Portugal wealthy during the 18th century. As a result of the bandeiras, the Capitaincy of São Vicente became the basis for the vice-kingdom of Brazil, which would go on to encompass the current states of Santa Catarina, Paraná, São Paulo, Minas Gerais, Goiás, part of Tocantins, and both Northern and Southern Mato Grosso. With only a few outlying Spanish settlements and the majority of Jesuit missions overrun, the de facto control over most of what is now the Southeast, Southern, and Central West regions of Brazil was recognized by the Treaties of Madrid in 1750 and San Ildefonso in 1777.

"In spite of the lack of geography, a science ignored by the Paulistas of old times, without other help than the Sun, they penetrated the interior of the Americas, conquering tribes. Some would go to the hinterland of Goias, until the Amazon river. Others to the coastline from the river of Patos until the river Plate, going to the river Uruguay and Tibagi. And going up through the Paraguay river until the Paraná [...] Some went through the vast hinterland beyond the river Paraguay going through the high mountains of the Kingdom of Peru. The Paulistas had to fight against the enemies and against nature: the latter with the weather and the former with wrath and hate. The lack of supplies could have made them cowards, if they were not used to eating the fruits of the hinterland, the honey of bees, the nuts of the forests, the sweet and bitter palmitos, and the roots of the plants known to be digestable". (Pedro Taques de Almeida Paes Leme)

"However a new breed of men was growing, wild yes and untractable, but one with which the native American blood infusion would soon acquire unrelentless building up activity. While the Spaniards, in Paraguay, stayed where Irala had placed them, treated generally the discoveries which the first Conquistadores had done with indifference, the Brazilians continued, for two centuries, to explore the country. These determined adventurers would spend months and months in the wild hunting slaves and looking for gold and silver, following the information they learnt from the native Americans. And finally, they managed to secure, to themselves and to the House of Braganza, the richest mines, the largest portion of South America, of all inhabited Earth, the most beautiful land". (Robert Southey, 1819)